Capt. Chris Orr (JetBlue) in the cockpit of a North American SNJ-2.

A hallmark of effective communications is ensuring that the message is seen by the intended audience. So when Capt. Chris Orr (JetBlue) and the other members of his precision aerobatics team have something they want to convey, they post it in the most visible location available—the sky.

A former F-14 Tomcat and A-4 Skyhawk pilot, Orr found out about the GEICO Skytypers from a fellow Navy airman who was flying for the team and noted that it’s based in Farmingdale, N.Y., not far from Orr’s home on Long Island. The JetBlue pilot soon enlisted but acknowledged that learning to fly the aircraft is no cakewalk. “The SNJ-2 is a real handful,” said Orr, adding, “It has a reputation for ground loop.” The potential for yawing and rolling near the prop arc and the response to turbulence require that the airplanes maintain some separation. Plus, Orr had no previous experience with tailwheel aircraft.

To get better acquainted with the plane’s traits, Orr ferried the SNJ-2s to air shows for several years. Once he felt confident flying the aircraft in all kinds of weather, the commanding officer/flight lead promoted Orr, who’s been a regular at air shows ever since.

Formed in 1977, the GEICO Skytyper team begins each new year with ground school and spring training. Orr noted that the group is organized like a naval squadron and that most of the pilots have been flying together for many years. “We can get spooled up pretty quickly,” he remarked.

Before each show, these writers in the sky engage in a team briefing along with a talk through and walkthrough, and demonstrations are followed by a thorough debriefing. Orr remarked that the team typically performs 15 shows a year, which is frequent enough that it “forces you to stay proficient.”

The six SNJ-2s fly in a line at 9,500 feet, emitting dots of smoke “like an old matrix printer,” said Orr. A central computer determines the routine details, and electronic signals control the smoke output. As compared to more conventional skywriting, “We type 17 times faster and generate messages with 20 to 25 characters in less than two minutes,” he noted. Messages can be 1,000 feet tall and, on a clear day, are visible from 15 miles in any direction. 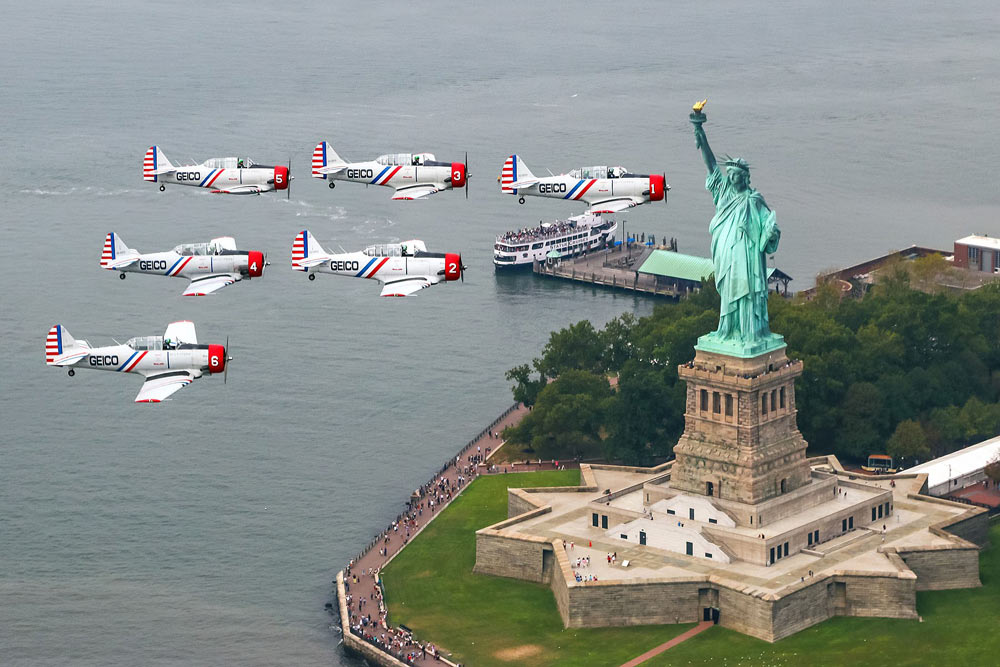 The GEICO Skytypers Air Show Team in a six-airplane formation flying by the Statue of Liberty in New York.

The SNJ-2s used by the GEICO Skytypers were built between 1940 and 1941 and have been fully restored and modified with 180-gallon fuel tanks, allowing the props to fly for more than four hours. Originally used as trainers during World War II, these planes each weigh 5,500 pounds and sport a 600-horsepower Pratt and Whitney R-1340-AN-1 nine-cylinder radial engine.

In addition to flying, the GEICO Skytypers team, which received the International Council of Air Show’s 2016 Art Scholl Showmanship Award, offers its time to a program called “The Sky’s the Limit,” which promotes aviation to youth groups and schools. “It’s a great organization and something special to be a part of,” said Orr.

A JetBlue pilot since 2005 and a former Comair pilot, Orr also has an extensive military background. After three years in the Army, he resigned and headed for Navy flight school in Pensacola, Fla. He completed two tours on the aircraft carrier, USS Constellation, making 300 carrier-arrested landings and flying 35 combat missions. Leaving the Navy, Orr flew C-130 Hercules for the New York Air National Guard for two more combat tours before retiring as a lieutenant colonel.


Writers in the Sky

Learn more about the GEICO Skytypers Air Show Team and see this year’s schedule of events at www.geicoskytypers.com.

This article was originally published in the January 2018 issue of Air Line Pilot.