Editor’s note: Air Line Pilot is introducing a new column, “My Mentor,” with the story of a mentorship circle at FedEx Express. Do you have a story about a mentor who inspired you? Visit alpa.org/mymentor for more information and to share your experience.

I remember my first visit to Embry-Riddle Aeronautical University in Daytona Beach, Fla., (ERAU-DAB) in 2010. I went to a traditional university and didn’t even know schools like ERAU existed when I applied. No one in my family is a pilot, and my high school’s career center didn’t have any information on aviation professions.

I was visiting ERAU-DAB as a part of ALPA’s Aviation Collegiate Education (ACE) Club. The ACE Club coordinates visits with ALPA volunteers to join students on a regular basis for mentorship and career learning opportunities. As I walked up to the aviation buildings, I peered through the fence. The entire flight line was filled with identical Cessna 172s and Diamond DA42 airplanes—definitely different than where I went to school.

One of the club student leaders I met that day was Justin Dahan, now a fellow first officer at FedEx Express. Justin told me the first day I met him that he wanted to fly for FedEx, so we immediately exchanged contact information and began an informal mentoring relationship.

He didn’t know a lot about FedEx, so he’d ask me numerous questions. I’d tell him the specifics of how everything worked at the company and how flying cargo can be different from flying passengers. I told him about ALPA and FedEx, which helped reinforce that was where he wanted to be.

Today, with both of us at FedEx, we have more of a peer relationship, but we still help each other out. We fly different airplanes and different schedules, even different routes—international versus domestic—so we’re constantly picking each other’s brains when it comes to our differing areas of expertise. 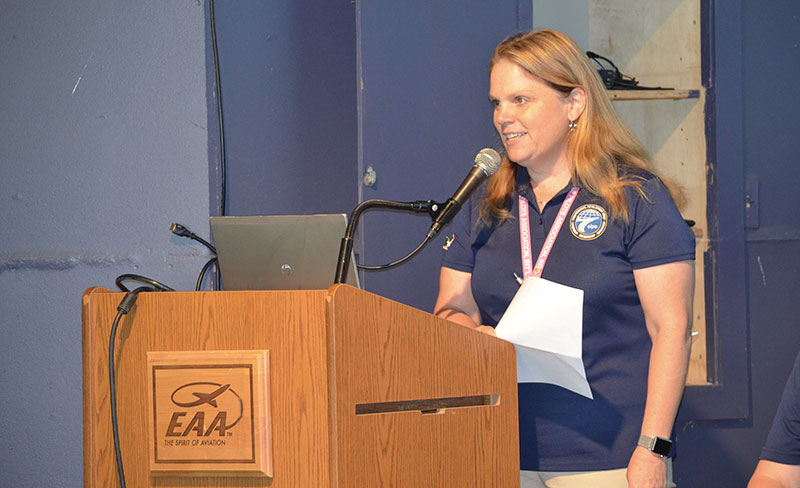 I graduated, became a flight instructor, and earned enough hours to get hired at PSA in 2014. I upgraded quickly to captain on the CRJ 200/700/900. Once I was off probation, I followed Kandy’s example and returned to the ACE Club, this time as a mentor and volunteer for ALPA. I became the coordinator for the club at my alma mater, ERAU-DAB, working with the students while coordinating other volunteers and putting presentations together.

From the beginning, Kandy was instrumental in my path to FedEx. She became my de facto question-and-answer person about everything. When I was still in college, it was more generic. But when I was at the regionals, we were able to get into more specifics about my interest in joining her.

I didn’t know a lot about the company, but Kandy filled me in completely. She was also a huge help in keeping me on track in the hiring process and making sure I got the right documents turned in at the right time. Even now, she’s still guiding me, answering my questions as I progress through the ranks.

I was a student leader of the ERAU-DAB ACE Club during my time in college. I helped get the organization off the ground at the start in 2010 and became club president my senior year. That same year, a freshman, Palmer Lintz, joined the ACE Club. Although I didn’t know it at the time, he’d eventually join me and Kandy in our mentorship group.

While I was at PSA, I returned to ERAU-DAB as the ACE Club coordinator and was on campus for almost every club meeting. Palmer was the club student president his junior and senior years, so we got to know each other well during that time. On one visit, I brought Kandy for a presentation titled “Flying Freight,” during which she talked about every kind of freight or cargo operator in the world. FedEx was a highlight, and Palmer expressed interest in FedEx immediately, much like I had. 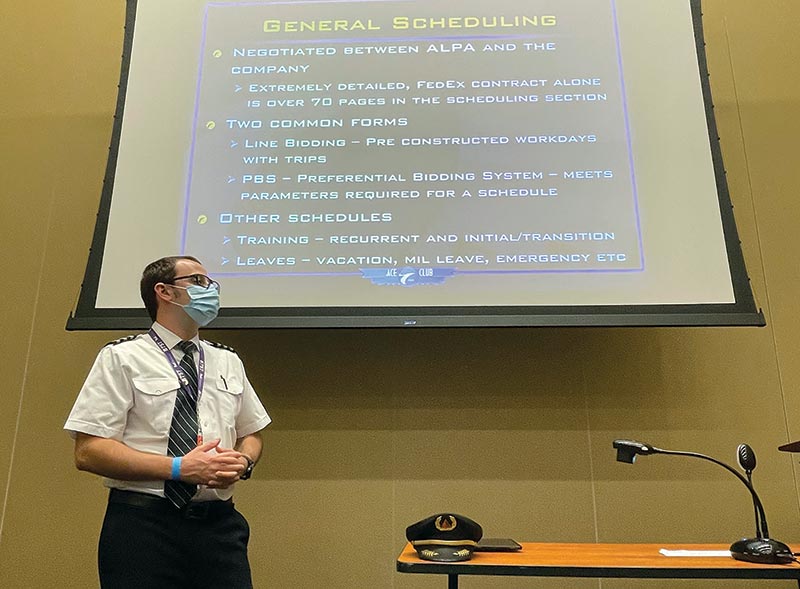 F/O Justin Dahan (FedEx Express) gives a presentation at a recent ACE Club meeting at Embry-Riddle Aeronautical University in Daytona Beach, Fla., where all three pilots met each other.

Both Justin and Kandy were part of my experience at ERAU-DAB. Justin was the liaison between ALPA and the ACE Club while I was the president, so he was the main person I would contact about events we were having. As a pilot, he was also the closest connection I had with an airline. He became a friend I could talk to about “real life” airlines—not just what they teach you in school.

Thanks to Justin, I recognized the value of being an ALPA pilot, so I pursued a position at PSA and was hired in March 2016. My intent was to come back as an ACE Club volunteer, just as Justin had. Once off probation at PSA, I did just that.

When Justin got hired by FedEx and I was at PSA, I’d ask some of the same questions he had asked Kandy. I’d get his take on the day in the life of a cargo pilot. There are so many unwritten pieces of knowledge that help you in any business, any company, and both Kandy and Justin were able to provide that information to me and give me a leg up.

They were always very encouraging to me, telling me to get involved and stay involved with interests other than flying. That’s why I maintained my passion for volunteering with ALPA and staying involved with the ACE Club.

When I got my 1,000 hours as pilot-in-command in 2019, I was ready to apply to FedEx. Kandy was very generous to send in her personal endorsement of me to FedEx’s in-house recommendation system, which was a huge deal at the time. The rules have loosened somewhat now, but then you could only use this recommendation once every 10 years so I felt unbelievably fortunate that she placed that much trust in me. At the same time, it pushed me to pay back that trust as I continued in my career.

I started with FedEx in July 2019 and once off probation I became a mentor for my pilot group. Today I’m the Master Executive Council’s Mentor Committee chair. I’ve had two of the best mentors anyone could ask for so this is how I’m paying it forward. 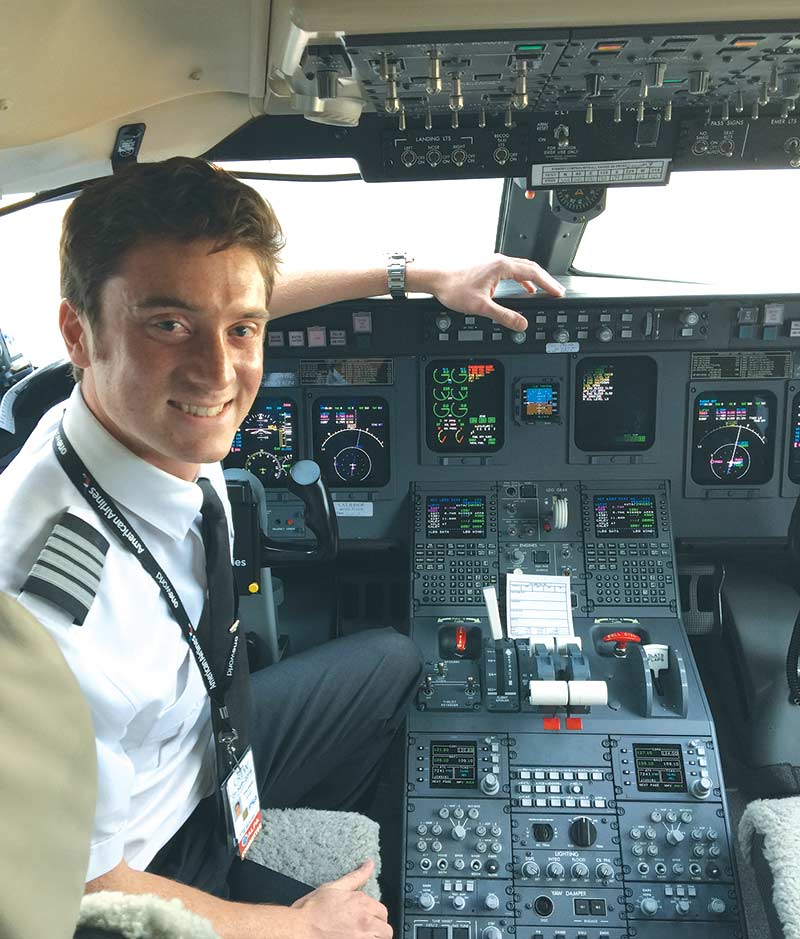