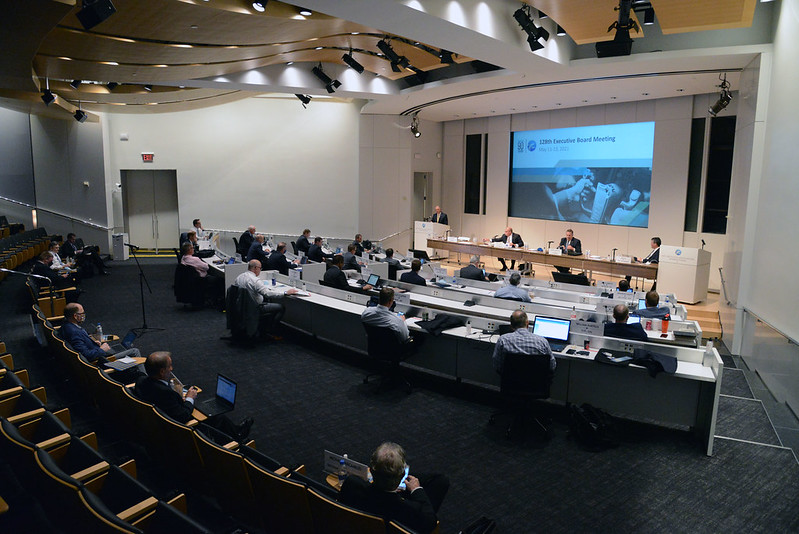 Following signs that the COVID-19 pandemic appears to be waning in the United States, ALPA’s Executive Board applied a combined in-person/virtual format for its 128th regular meeting. The union’s national officers, executive vice presidents, and many of its master executive council (MEC) chairs assembled May 11–12 at ALPA’s McLean, Va., offices where the event was broadcasted. Additional MEC chairs, other pilots, and staff members participated virtually.

Following a roll call and an update from the Credentials Committee, the meeting began with reports from ALPA’s four national officers. After welcoming attendees, Capt. Joe DePete, ALPA’s president, provided an overview of the Association’s many activities and accomplishments since the group convened last September.

“Making certain that an experienced pilot workforce would be ready to drive a rapid and strong economic recovery is one of the reasons ALPA fought so hard for the U.S. government to create—and then extend—the payroll support program [PSP],” said DePete, in reference to the U.S. legislation that’s provided federal aid to airlines and airline workers during this global health crisis. He acknowledged the need for a similar aviation industry and employee-centric stimulus package in Canada. “The memory of what happened to airline workers after 9/11 is painfully real for ALPA pilots—and our union vowed never to let it happen again,” he asserted.

During his report, DePete drew special attention to the Association’s recent Aviation Policy Week and the union’s latest white paper, “Battling the Pandemic, Rebuilding Our Economy, and Connecting the World.” DePete remarked, “In the paper, we lay out a pilot-partisan agenda to defeat COVID-19 while ensuring safe air transportation, protecting workers’ and labor rights, and expanding opportunities in the aviation workforce for all individuals.” He noted that as part of the Aviation Policy Week’s activities, 80 ALPA pilots engaged in virtual meet-and-greet sessions with 26 newly elected federal lawmakers to introduce the white paper and establish relationships (see “ALPA Outlines Aviation Priorities with Newest Members of Congress” in the April–May issue).

Capt. Bob Fox, ALPA’s first vice president, briefed the Executive Board on the Association’s global activities and its work through the International Federation of Air Line Pilots’ Associations (IFALPA), of which ALPA is a member, to address COVID-19 challenges. He shared a video documenting the experience of a Kalitta Air pilot who was quarantined after testing positive for the virus in Hong Kong and ALPA’s work through the federation to assist and free him (see “The Impact of Pilots Helping Pilots Showcased at Annual IFALPA Conference” in the April–May issue). “It’s stories like these that fuel the more than 425 safety volunteers of the Association’s Air Safety Organization to continue the work we do on the behalf of our more than 59,000 pilots in the U.S. and Canada,” he remarked.

Fox also discussed the rapid evolution of new business models and cross-border airline operations, and the policy changes needed to address these issues on a global aviation level. He noted his involvement with the International Civil Aviation Organization’s (ICAO) Cooperative Oversight for Cross-Border Operations Subgroup to address issues like airline group operations and short-term aircraft interchange operations. He commented that certain foreign carriers use these business models “to skirt around the social protections in different countries and to ignore scientific data that has made our industry the safest mode of transportation in the world.”

During his presentation, Capt. Bill Couette, ALPA’s vice president–administration/secretary, highlighted the work of the Association’s Information Technology Advisory Committee to create new efficiencies and provide valuable resources for ALPA members. Foremost among these recent developments is the cockpit jumpseat Flight Finder feature of ALPA’s mobile app. Couette shared a video that explained how Flight Finder enables members to determine the most efficient way to reach a destination, even if the routing requires multiple connections and airlines. “Flight Finder is a game changer,” he asserted.

Couette also discussed other updates to ALPA’s mobile app, including plans to add both the existing FAR Part 117 calculator for U.S. crews as well as a new flight-time/duty-time calculator for Canadian members. In addition, he reviewed the work of the Association’s Professional Development Group, Fee-for-Departure Committee, and Pilot for Pilots (P4P), ALPA’s emergency relief fund. Assessing all of the products and services ALPA has produced during the pandemic, he commented, “I believe this phase in our union’s history will be remembered for the many ways ALPA came to the aid of its members.”

“Here at ALPA, thanks to an amazing team effort of our pilot leaders, volunteers, and staff, combined with other factors that I’ll discuss today, we’re coming out of the crisis in perhaps the best possible position we could have imagined when things first hit in March 2020,” said Capt. Joseph Genovese, ALPA’s vice president–finance/treasurer, to the board. He examined the effects of PSP and its two extensions in keeping ALPA members employed and the Association’s dues income higher than the union might have anticipated during such an economic downturn.

“Our team from Representation worked with many MECs to negotiate groundbreaking deals to not only keep pilots on the property, but to reward them once we are cleared on the other side of this pandemic. All of these efforts kept our dues income steady, but the work and dedication of every department, committee, MEC, and local executive council kept spending in check, which led to a positive net income,” Genovese noted. He placed special emphasis on the Association’s extensive work to control costs, adding, “There’s still lots of hard work to come, and we must remain conservative.”

The meeting featured three keynote speakers who shared valuable insights as well as updates on their efforts to support the aviation industry and its pilots.

“Just yesterday, I co-introduced along with [House Transportation and Infrastructure (T&I) Committee] Chair [Peter] DeFazio and Aviation Subcommittee Chair [Rick] Larsen a bipartisan Fair and Open Skies Act, a bill that precludes the Department of Transportation from granting a foreign air carrier permit to a foreign airline that exploits its flag of convenience by establishing itself in a country other than that of its majority owner to avoid regulations and labor standards,” said ALPA member Rep. Kaiali‘i “Kai” Kahele (D-HI) to the meeting’s attendees.

A member of both the T&I Committee and the Aviation Subcommittee, Kahele is the only current Member of Congress to maintain his currency as an airline pilot. This distinction provides him the unique opportunity to spearhead this and other important aviation legislation. Regarding the Fair and Open Skies Act, he remarked, “We need to get this bill out of the Congress to the president’s desk for his signature, and I’m committed to doing whatever it takes to make that happen.”

“We have our own office at the ICAO building,” said Netskar, describing the federation’s unique relationship with this specialized agency of the United Nations, which sets standards and recommended practices for aviation safety, security, environmental protections, and procedures addressing technical matters. Because pilots provide a unique perspective critical to developing and adapting air transport protocols, IFALPA was granted permanent status on ICAO’s prestigious Air Navigation Commission.

Hassan Yussuff, president of the Canadian Labour Council, also spoke to the group, outlining the effects of the ongoing pandemic on Canadian workers. “There have been huge challenges the country has been faced with, but we continue to focus our efforts to get the government’s attention and, more importantly, to work to ensure they can do their best to address the issues that working people face.”

Yussuff noted, “There are some 55,000 jobs in Canada that depend directly on [your] sector. Indirectly, there are hundreds of thousands of jobs that are supported across the country by the transportation industry, specifically the airlines.”

Capt. Rich Hughey (FedEx Express), who chairs ALPA’s Cargo Committee, spoke to the board from his layover hotel in Madrid, Spain. “One Level of Safety” has been an ongoing campaign for ALPA to bring all-cargo safety and security standards in line with those of passenger operations. “While all-cargo operations only make up 7 percent of the Part 121 industry, by departures, they have an accident rate that’s 10 times higher than passenger carriers,” he observed.

Hughey continued, “There are common hazards between cargo and passenger operations, but they’re expressed differently in risk, fatigue being one.” He acknowledged that 14 CFR Part 117 flight- and duty-time regulations and rest requirements were updated effective Jan. 4, 2014, for pilots of passenger airlines based on the latest science looking at circadian rhythms and fatigue. However, all-cargo pilots were inexplicably excluded, and ALPA continues its work to reverse this action.

Noyes pointed to a particular airline that requested and received a non-FRMS exemption from the Canadian regulator and then proceeded to ask for five more. He remarked that his committee is working with ALPA Canada to stop needless policy deferrals and immunities, adding, “There’s an FRMS, there’s a regulatory process, there’s an avenue to go down that you can work through to provide those mitigations and to provide the ability to do this much like we do in the U.S. and in the international community. That’s the proper way to go forward because it protects our pilots.”

F/O Paul Ryder (United), ALPA’s national resource coordinator, also briefed ALPA’s governing body on his extensive list of high-level projects, which includes promoting the DART system among ALPA pilot groups, Pilot Support Group assistance, Fee-for-Departure (FFD) Committee and FFD pilot group guidance, work on international and ICAO issues, and reevaluating the current supply of pilots and future demands. He noted that ALPA is making every effort to effectively address these matters to ensure that “our organization has everything it needs to make certain that you and our pilots are successful.”

Capt. Nathan Hillard (Delta), ALPA’s P4P Board of Directors president, spoke about the strain on the fund’s account balance brought on by requests for grants to address the pandemic and other recent events. The fund is an in-house, tax-exempt charity that provides financial aid for ALPA pilots and their dependents who need help with the immediate, extraordinary expenses that follow widespread, catastrophic events. He observed, “June is P4P Awareness Month and the P4P Board of Directors will use this opportunity to highlight the importance of this valuable resource and the different ways members can contribute.”

Between plenary sessions, board members deliberated on a series of policy changes to the Association’s Administrative Manual and authorized a Major Contingency Fund allocation to the pilots of PAL Airlines for extended contract negotiations support. Couette also briefed the group on the status of ALPA’s 2020 strategic plan and the progress being made in its eight key areas.

View the presentations from the Association’s national officers during the May Executive Board meeting.