If you enjoy Alpine snow skiing or snowboarding, F/O Are Johnsen (Delta) has the event for you. When he isn’t flying Airbus A330s for his airline, Johnsen serves as the president of the North American Airlines Ski Federation (NAASF), an organization that brings together clubs of employees from different U.S. and Canadian airlines. Three times a year, teams gather at some of North America’s most renowned ski resorts to compete for awards and simply have a great time. Those who wish to attend but not compete are welcome to register and enjoy the mountain at their own pace.

Johnsen grew up in Norway and started skiing when he was three years old. “They say Norwegians are born with skis on their feet,” he quipped. Years later, Johnsen came to the United States to attend a civilian flight school in Missouri and decided to stay. After earning his license, ratings, and certificates, he went to work flying for Pan Am Express in 1987 and later transferred to Northwest Airlines. Johnsen became a Delta pilot in 2009 when Delta and Northwest merged.

Johnsen competed in his first NAASF competition in 1998 at Steamboat Springs, Colo.. The following year, he was asked to help the organization’s marketing department. Johnsen subsequently served two separate terms as vice president and has served as president since 2014. 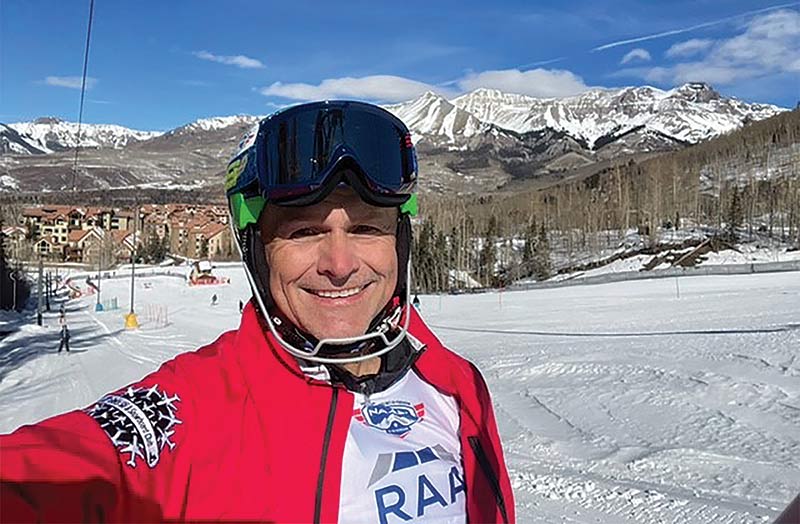 Johnsen, who began skiing at the age of three, has served as president of the North American Airlines Ski Federation since 2014.

Last month, 267 pilots, flight attendants, and other airline employees gathered at the Palisades Tahoe Ski Resort in California to participate in this year’s final event. Previous 2022 NAASF competitions were held at Taos Ski Valley in New Mexico in January and Telluride Ski Resort in Colorado in February. In addition to helping coordinate these races, Johnsen placed second in the overall Men’s Division “A” (advanced) category.

Ski week heats include a slalom, or skiing between poles necessitating quick, short turns; a giant slalom, which has the characteristics of both a slalom and a standard downhill race; and a snowboard contest. Adult social events are held in the evenings, including an awards dinner.

NAASF was established in 1976, and over the years, thousands have participated in annual airline skiing events. “In 2020, we had 336 skiers show up in Steamboat Springs,” said Johnsen, who added that the 2021 events were more sparsely attended due in large part to the pandemic. “We ran races but didn’t hold any social events.”

Part of the appeal of these gatherings, whether you choose to race or ski at your leisure, is the discounts NAASF is able to negotiate. As a general rule, NAASF is able to offer reduced rates for lodging, lift tickets, rental equipment, and purchases around the resorts. The organization charges a registration fee that covers social gatherings and other events.

In addition to the three annual ski weeks, NAASF manages a nonprofit foundation established in 1983 to provide “financial assistance in the form of scholarships, grants, or gifts to deserving individuals and organizations involved in competitive skiing programs.” To date, the foundation has collected more than $160,000. NAASF primarily raises these funds through raffles it holds during the organization’s social gatherings.

“NAASF ski weeks are a lot of fun and a great opportunity to meet and get to know your fellow pilots and other airline employees,” said Johnsen. “Plans are already in the works for next year’s events.”

Find Out More About NAASF

Get information about the North American Airlines Ski Federation (NAASF), including links to current airline clubs. Don’t see your airline listed? Contact NAASF and find out how you can start one.