Cargo Associations Summit: Unified in Cause and Purpose

More than 30 pilots and labor representatives from 15 airlines gathered in Cincinnati, Ohio, on May 3–5 for the three-day Cargo Associations Summit to talk about the challenges the airline cargo sector is facing, share insights, and work to improve the career path of cargo pilots. 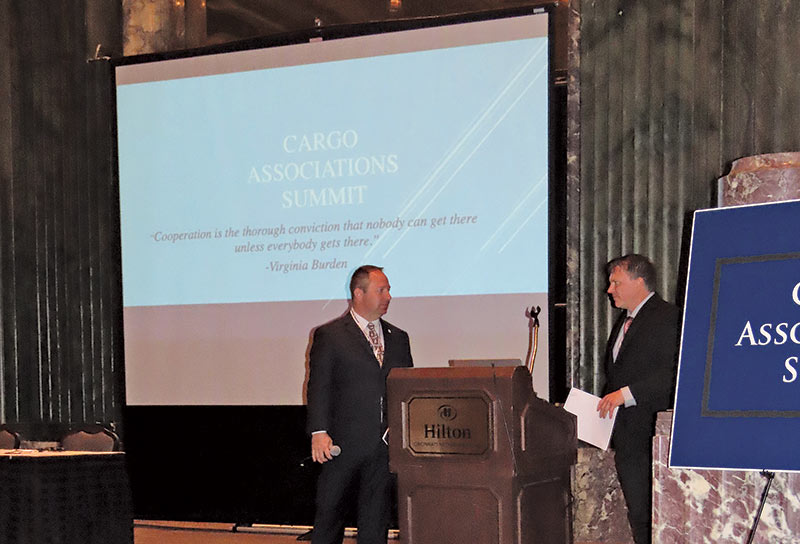 “This is an opportunity for us who fly cargo—both exclusively and not—to gather and converse on the challenges that we’re all facing, share our insights, and work together to improve the career path of those in our profession,” said Keyes.

“Your leadership and participation in this collaborative effort will—without a doubt—benefit pilots for years to come,” Mankamyer commented. “By fostering a meaningful dialogue and working together, we can truly lift the standards for all pilots flying cargo worldwide.”

Capt. Russ Sklenka, ALPA’s executive administrator, who represented the Association and Capt. Joe DePete, ALPA’s president, during a labor president’s roundtable, noted, “This summit is another example of increasing and intensifying the unity among pilots who fly freight—and all airline pilots in the United States and Canada—on the issues that affect our industry and our profession.”

In a presentation on Part 117 and fatigue risk management systems, Capt. Brian Noyes (United), ALPA’s Flight Time/Duty Time Committee chair, remarked, “Part 117 regulations are based on scientific knowledge of the effects of fatigue, sleep, and circadian rhythms on the human body. Cargo pilots were included when the regulations were originally proposed by the FAA, but a flawed cost-benefit analysis of the regulations in 2012 as applied to all-cargo operations compared to passenger operations resulted in their carveout from the protections.

“Fatigue can have devastating effects on the performance of a pilot,” Noyes observed. “Of course, cargo pilots are routinely operating aircraft under the most fatigue-inducing conditions and yet aren’t afforded the protection of scientifically based duty and rest regulations. And this is despite sharing the same airports, facilities, and airspace as passenger carriers.” 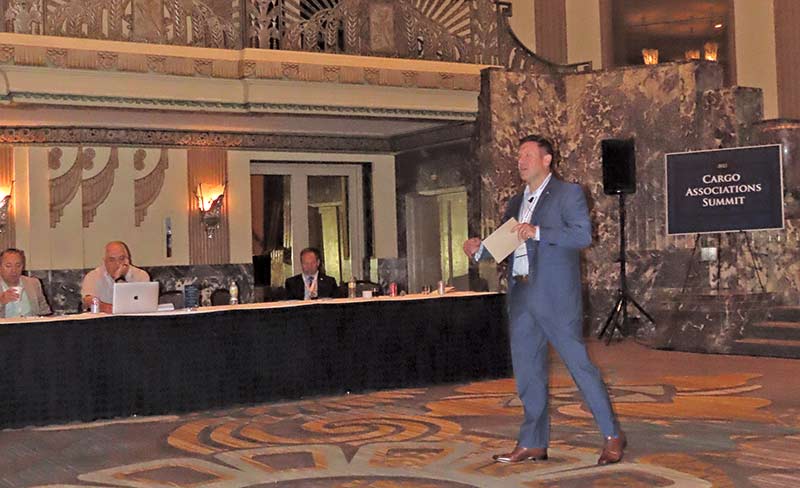 Capt. Steve Jangelis (Delta), a former ALPA Aviation Safety chair, reinforced Noyes’s points by further comparing all-cargo operations to those of passenger operations. “ALPA believes that one level of safety is also an outcome, a result in safety performance across all commercial aviation operations. We seek to level the playing field of risk.

“There are many ways this is achievable,” Jangelis continued, “be it through legislation, regulation, implementation of CAST [Commercial Aviation Safety Team] safety enhancements, and by installing safety technologies. Coupled with the diligent employment of safety management systems and collective bargaining agreements, these efforts result in a maturation of a safety culture.

“Conversely…if passenger airlines experienced the same accident rate as all-cargo operations—2.72 accidents per million departures—passenger carriers would have had 277 major accidents in those same 10 years, or 2.3 accidents per month,” remarked Jangelis.

“Passenger pilots and cargo pilot alike manage risk every day in our commercial aviation system,” he observed. “This is why ALPA believes in one level of safety.”

Capt. Scott Schwartz (FedEx Express), director of ALPA’s Dangerous Goods Program, shared his insights on the carriage of these materials on aircraft. “Thankfully, in-flight fires are a rarity. But as lithium batteries continue to increase in use, their threat is growing,” he commented.

“And yet, it’s been determined that it’s appropriate for all-cargo pilots to literally carry the risks and burden of this type of cargo,” Schwartz said, “and in many cases, without effective precautions and countermeasures. Class E detection and suppression are simply not adequate for combatting today’s cargo fires.

“In addition, many of the regulations governing dangerous goods need updating, as they aren’t based on the nature of what we’re flying cargo-wise today, nor are they based on the safety characteristics of our cargo compartments,” Schwartz observed. “What’s truly needed is a performance-based system that can and will be effective in handling the worst of dangerous-good situations. Until such time, and perhaps still then, we must remain vigilant and encourage our airlines’ use of appropriate mitigations to keep air travel safe for all.”

“This is all against the backdrop of the nation’s forecast economic growth being moderate, but overall economic conditions remain favorable, and unemployment decline and wages continue their upward trajectory,” he remarked. “And while U.S. inflation in March hit its highest measure since 1981, it did so as a result of the collision of strong demand and stubborn pandemic-related supply shortages persisting.

“In the U.S., growth in air cargo continues to outpace air travel by a large margin. Year to date through January 2022, cargo traffic was up 21 percent while passenger traffic was still down 34 percent,” Karg said. “And this growth continues despite a challenging environment: the ongoing spread of the omicron variant in Asia, and China in particular, as well as the war in Ukraine, which has led to a fall in the capacity used to serve Europe, as several airlines based in Ukraine and Russia were crucial carriers in the region.”

“While the air cargo industry had taken 10 years to recover from the global financial crisis and subsequent spike in oil prices,” Tennen commented, “air-cargo demand reached an all-time high in 2020 and continued to grow in 2021—with the outlook for the next two to three years being very promising due to the global economy’s expected growth of 4.4 percent in 2022 and 3.8 percent in 2023, per International Monetary Fund projections.”

Addressing pilot supply, Tennen observed, “Pilot hiring ramped up during 2021 and will continue as mainline partners look to grow after the current wave of replacing early-out pilot retirements. The direct flow of regional pilots to major carriers will increase their pilot populations but will reduce the number of available pilots for the cargo sector.

“Given the high demand for cargo, some mid-size passenger carriers are converting some of their operations to cargo, contracting with Amazon directly or through other cargo airlines,” he said. “Right now, these are relatively small in size, but what does tomorrow look like? Who knows.”

Another cargo summit is planned for next year, with more organizations being invited to share their insights and knowledge.