A Glimpse of the Future: Visiting Honeywell Aerospace 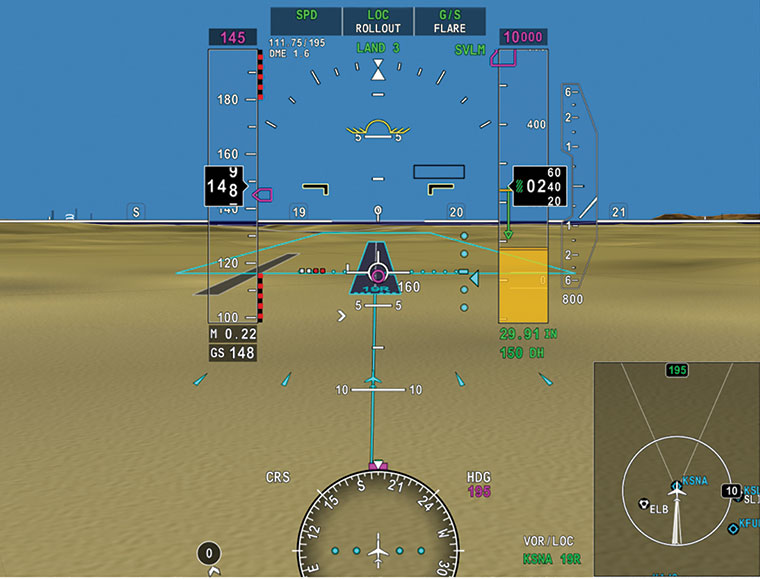 ALPA’s Air Safety Organization Aircraft Design/Operations (ADO) Group routinely works with manufacturers to provide line pilot input into the development of emerging technologies that interface with flight crews or have an impact on crew workload and aviation safety.

In March, Honeywell Aerospace invited ALPA’s ADO group to visit its Phoenix, Ariz., campus. Capt. Dennis Borik (Compass) and I, along with Rikki Gardonio, an ALPA staff engineer, were given the opportunity to investigate developments in several new flight technologies and avionics advancements demonstrated on various platforms.

A synthetic vision system (SVS) is a type of augmented reality that projects a representation of the 3-D world outside of the airplane onto a 2-D screen inside the airplane. This 3-D rendering pulls from databases used for enhanced ground proximity warning systems. A limitation of SVS is that it’s not a real-time representation of all elements outside the aircraft, such as wildlife or other aircraft, but it does provide a clear picture of the nonmoving obstacles pilots may face regardless of visibility.

A synthetic vision guidance system (SVGS) is an SVS depiction of the outside world combined with additional functions that provide pilots with increased aircraft state and situational awareness along with navigation performance monitors that enable lower than standard Category I minimums (150 feet vs. 200 feet). Features can include a representation of the flight path vector, the extended runway centerline, aircraft stopping performance based on runway surface condition, and possible runway incursion threats.

SVS and SVGS shouldn’t be confused with an enhanced flight vision system (EFVS). EFVS relies on an infrared or similar-type camera mounted outside the aircraft to project real-time images onto a screen to augment what the flight crew sees. EFVS is typically seen on head-up displays and can help improve pilots’ vision when weather would otherwise obstruct their view of a runway on approach.

A combined vision system (CVS) joins SVGS and EFVS and provides a complete picture to the flight crew. These systems allow pilots to visualize what’s happening real time near the airplane while also providing a synthetic view of distant obstacles along with aircraft state and position awareness. 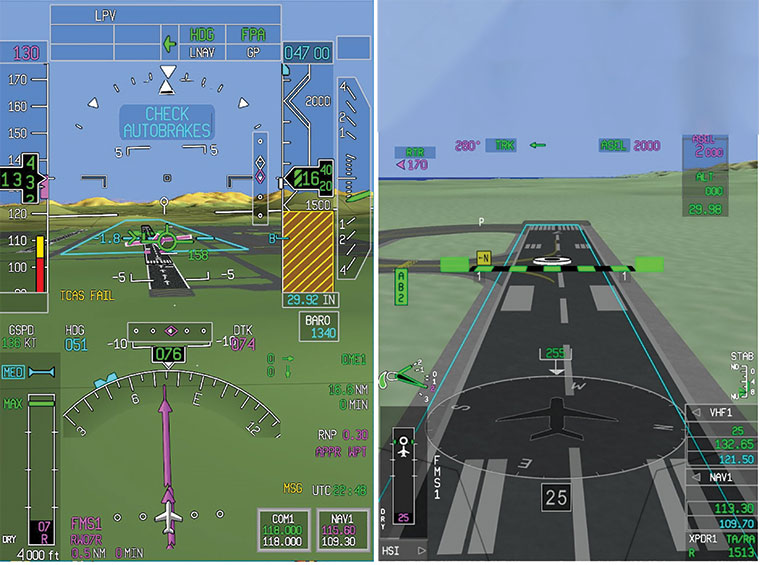 Left: Current autobrake setting (medium) is predicted to not stop the aircraft on the available runway landing surface. ROAAS provides a visual “Check Autobrakes.”
Right: After landing, the display transitions to an exocentric mode. The ROAAS white deceleration “donut” indicates current braking performance (which is just past the Max Brake Green line). The donut may be used in conjunction with the 3-D airport map to plan the runway exit.

The Honeywell innovation iNAV contains lateral and vertical maps integrated with graphical flight planning that features larger displays, including a bigger vertical situation display that improves readability and allows a larger profile view with spherical terrain overlay. An airspace overlay was added to help pilots identify speed restrictions on instrument departure and arrival routes. XM weather can also be overlaid on the map.

Because landing is one of the most safety-critical phases of flight, the runway overrun and awareness system (ROAAS) provides display and alerting that helps increase pilot situational awareness and decrease workload by providing information on predicted stopping points, the selected runway, and available landing distance.

While airborne, ROAAS is a predictive system that gives pilots a visual representation of where their airplane is projected to touch down and stop. On the ground, ROAAS uses real-time aircraft deceleration data to update the indication of where the aircraft will likely stop on the runway, better informing pilots with real-time information to assist in braking inputs or thrust reverser selections on rollout.

ROAAS provides alerts based on comparison of runway location with the available runway during approach and remaining runway and predicted stopping distance with weight on wheels. ROAAS uses manufacturer-provided performance metrics along with aircraft speed, position, trajectory, flight path vector, runway condition, and, if available, autobrake selection and aircraft deceleration on the ground. The data is compiled and relayed as both visual and aural alerts to the flight crew.

ROAAS presents information in an easily interpretable format, utilizing both 2-D and 3-D displays depending on phase of flight and can determine the projected aircraft stopping point based on real-time deceleration and braking performance. The 2-D ROAAS display contains color coding for runway safety areas, a runway condition code, and the “deceleration donut,” which projects the actual aircraft stopping point on the runway—moving the indication up or down based on aircraft deceleration.

The ROAAS 3-D exocentric display is activated on the primary flight display after aircraft weight on wheels and other aircraft parameters indicating a commitment to land. It provides pilots with a realistic depiction during landing rollout. This interface displays the deceleration donut on the primary flight display and elevates critical elements such as LAHSO markings and runway/taxiway signage. ROAAS can be integrated into a comprehensive SVGS suite, and Honeywell anticipates the 2-D and 3-D ROAAS displays will initially launch as available options on the Embraer E-Jets fleet and capable business jets. 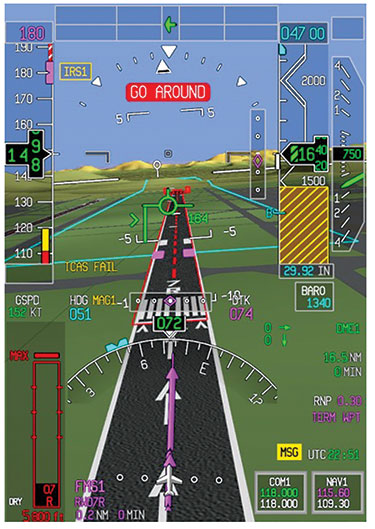 The current energy state of aircraft prediction (as calculated by threshold crossing height and speed with manufacturer-provided performance data) indicates there is insuffi-cient runway length available to make a safe landing. ROAAS provides an aural and visual display “Go Around.”

Honeywell’s surface indications and alert system (SURF-IA) is designed to reduce the risk of runway incursions. SURF-IA uses ADS-B data to improve awareness of surrounding ground traffic and alerts pilots of a potential runway incursion ahead of time. SURF-IA is activated inside the runway engagement zone, which encompasses all ground-based ADS-B traffic spanning the length of the intended landing runway up to three nautical miles from the approach threshold.

SURF-IA provides pilots with aural and visual runway occupancy alerts—advisory (potential traffic threat), caution (impending threat), or warning (imminent threat)—to help them determine whether to go around or abort during landing or takeoff. 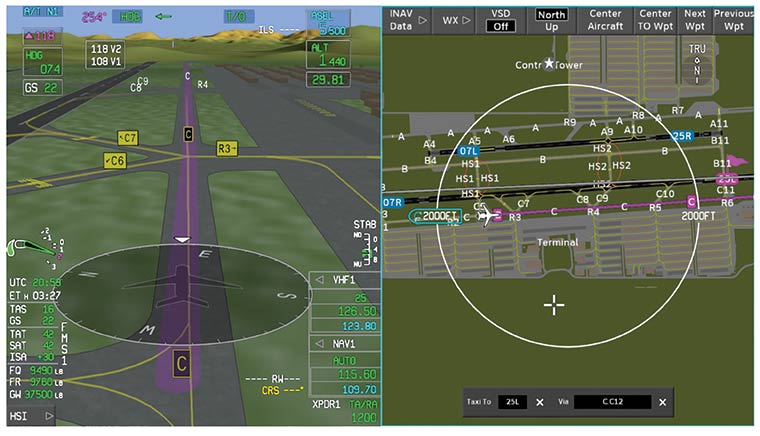 TaxiWiz can provide a pilot with a taxi waypoint path on the 2-D and 3-D airport map. Currently this path is entered via scratchpad entry and/or graphical selection.

TaxiWiz is another airport ground environment system that augments the pilots’ outside view by providing a live airport moving map, key markings, traffic indications, signage enhancements, and geographic taxi path depiction. Although TaxiWiz is in final development but not yet ready for industry use, Honeywell demonstrated the system on one of its simulators. Intended to increase pilots’ ability to orient, locate, anticipate, and make taxi decisions efficiently, TaxiWiz automatically displays the most direct path to parking or a runway end.

By entering a string of taxiway and runway identifiers either via flight management system or control cursor device, flight crews can change the routing based on instructions from ground control. While the entered route is depicted in a magenta line, if crossing a runway during taxi is required, TaxiWiz won’t draw a line across the runway in order to provide pilot awareness and ultimate authority to cross runways. If a taxiway is left out of the clearance input but is required to get from one point to another, that taxiway is depicted in cyan dots. TaxiWiz can be displayed in a 2-D airport map or in a 3-D exocentric view, which improves pilot situational awareness throughout the taxi process. In the future, TaxiWiz can be easily integrated with digital taxi clearance.

After the technical briefings, Honeywell took us on a two-hour flight test aboard its Falcon 900 test bed. During the flight test, multiple systems were demonstrated, including ROAAS, TaxiWiz, and the overall SVGS package.

Honeywell briefed us on upcoming enhancements to its radar technologies, which include autotilt and the detection of ice crystals, wind shear, turbulence, and lightning—with a five-minute buffer allowing flight crews to see the surrounding weather during heading changes. We also visited the Embraer lab where SVGS and ROAAS are tested in a fixed-based training device with the ability to switch between existing and new displays to demonstrate the benefits of SVGS and ROAAS on the E-Jet.

Honeywell showed us a HUD demonstrator where its pilots can test EFVS and CVS displays and provide feedback regarding what they find most useful, ensuring such a device doesn’t include extraneous details. We also visited the Airbus lab where the Honeywell display system, with graphic capability to include the advanced features described above, is being retrofitted for the A300.

ALPA appreciates that Honeywell values line pilot feedback and is thankful for the opportunity to tour its facilities and view its new technologies. ALPA’s ability to explore aviation advancements is key to our culture of keeping safety at the forefront, and maintaining relationships with manufacturers is invaluable to ensuring that the line pilot’s voice remains heard during product development.