Editor’s note: Exposing the dangers of reduced crew operations has been and will continue to be an ALPA priority. In this nine-part series, Air Line Pilot will educate, inform, and advocate support for maintaining the most vital aircraft safety feature: two experienced, well-trained, and well-rested professional pilots on the flight deck. Catch up with Part 1.

“ALPA staunchly advocates that having two experienced, well-trained, and rested pilots on the flight deck is the most critical safety feature on any airliner. Trained for life, pilots have helped make commercial aviation the safest mode of transportation in the world. The Association will continue to push back against those who seek to reduce—or eliminate completely—this vital safety feature.—Capt. Joe DePete, ALPA President


At the start of this year, on the heels of an international air show, news media outlets carried sensational headlines irresponsibly reporting that the notion of reduced crew operations for aircraft was just around the corner. The articles, largely borrowing from a single story from a major news channel, cherry-picked findings from a 2014 NASA study on single-pilot operations that suggested that a reduced crew transition could “provide operating cost savings while maintaining a level of safety no less than conventional two-pilot commercial operations.”

ALPA is no stranger to leading the safety charge when up against a profit-minded motive. Even before new first officer qualification and training regulations were enacted in 2013, they came under assault by special interests focused not on safety but the bottom line. And these rules still are being challenged today; however, ALPA continues to push back against those who seek to weaken these important safety regulations.

In addition, flag-of-convenience air carriers and atypical employment practices continue to proliferate in the global marketplace, undermining labor relations, aviation safety, and the stability of the domestic airline industry. The Association and its allies continue to advocate against such schemes.

But the startling vision of József Váradi, CEO of Hungarian low-cost airline Wizz Air, goes beyond an attempt to weaken regulations and labor laws—it’s a direct assault on safety. In 2018 upon receiving his CAPA Airline Executive of the Year Award, Váradi commented that his vision for success—high productivity, low costs, low fares, and the highest profit margins—would be accomplished by using “robotic pilots.”

Váradi is certainly not alone in the quest to achieve increased profits. For decades, airline CEOs have been crunching numbers to maximize value for owners and shareholders. With that in mind, Boeing laid the groundwork for its push into autonomous flight with its purchase of Aurora Flight Sciences, a manufacturer of aerial drones and pilotless flying systems. In 2019, Aurora performed its first successful test flight of an autonomous passenger air “flying car” prototype, complete with a controlled takeoff, hover, and landing.

In 2020, Airbus successfully concluded its Autonomous Taxi, Takeoff, and Landing (ATTOL) project with a series of six test flights of an A350-1000 XWB, each one including five takeoffs and landings per run, to assess autonomous flight capabilities.

“The ATTOL project was initiated by Airbus to explore how autonomous technologies…could help pilots focus less on aircraft operations and more on strategic decision-making and mission management,” the company said in a press release. “Airbus is now able to analyze the potential of these technologies for enhancing future aircraft operations, all the while improving aircraft safety, ensuring today’s unprecedented levels are maintained.”

In April 2021, Xwing, a startup company developing technologies for self-flying aircraft, completed what it called the world’s first fully autonomous demonstration flight of a commercial cargo aircraft from gate to gate when a converted Cessna Grand Caravan 208 pulled away from Xwing’s hangar in Concord, Calif., taxied, took off, landed, and returned to the gate entirely on its own.

According to Xwing officials, autonomous aircraft address the “potential shortage of pilots” in the coming years, and they anticipate that fully autonomous cargo airplanes will be completing deliveries within the next few years. In response to the company’s application for an FAA Part 135 certificate for a cargo operator, ALPA provided substantial comments to the FAA docket regarding concerns about this aircraft.

In testimony before the U.S. House of Representatives Committee on Transportation and Infrastructure on the topic, Capt. Bob Fox, ALPA’s first vice president and national safety coordinator, stated, “We’ve documented many technical, regulatory, and financial barriers that indicate that single-pilot operations are a nonstarter either financially or due to safety and operational factors. More importantly, our continued record of safe landings clearly demonstrates that fewer than two pilots on commercial airliners is a threat to aviation safety and the concept should be shelved permanently.”

During the Association’s recent Leadership Training Conference, Fox observed, “This is a technology that virtually no one is asking for, but some think it’s the magical salve that will ensure profits even in a down economy. As such, it represents a clear and present danger to our profession.” He remarked that NASA research found that automated flight was not close to being ready for even test operations and noted the Association’s successful efforts to remove Section 744 of the FAA Reauthorization Act of 2018 that would have established a research and development program in support of single-piloted cargo aircraft.

ALPA asserts that government funding of single-pilot operations is poor use of limited federal budget resources and that there are far better investments to be made in the industry’s future, including speeding the completion of NextGen—which the implementation of reduced crewing would disrupt—and funding research that will lead to safer, more fuel-efficient, faster, quieter, and more environmentally friendly aircraft. These initiatives will have a much greater long-term benefit on the air transportation system.

Apart from the NASA study, the federal government has been largely silent on the topic. But private industry has made a major push in the news media to share technological strides to remove pilots from an airline flight deck. Some of this technology is still federally supported by the Defense Advanced Research Projects Agency, which allows government-funded technology to be used for commercial applications.

While these companies extoll the advantages of their work—expanding automation to decrease pilot workload, supplementing the aviation workforce, and applying military technology to the commercial sector—they fail to recognize the fundamental truth that ALPA, “the conscience of the airline industry,” knows firsthand: the skills, experience, and professionalism of airline pilots can’t be replaced with computer servos and software without compromising the safety and security of delivering passengers and cargo to their destinations. 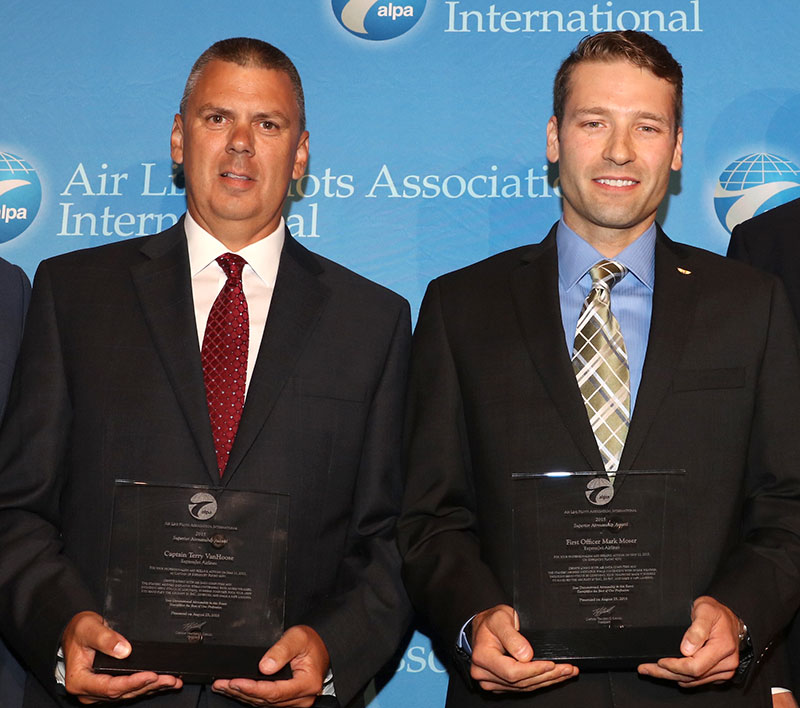 Capt. Terry VanHoose and F/O Mark Moser were piloting ExpressJet Flight 4291 from Houston, Tex., to San Luis Potosi, Mexico, on May 11, 2015, facing a challenging flight ahead as extreme weather covered most of the flight path.

The crew had flown around areas of deteriorating weather when they began to see anomalies in their flight instruments. As the crewmembers evaluated the situation, they quickly realized that they’d lost both of their air data computers, meaning that many of their flight instruments were unreliable, and their standby airspeed indicator stopped functioning.

VanHoose took the controls and asked Moser to run the appropriate troubleshooting procedures. With multiple faults present, VanHoose’s experience led him to identify the most likely starting point, and he instructed Moser to run the Quick Reference Handbook procedure associated with an unreliable airspeed.

Complicating matters, severe thunderstorms were in the vicinity. Flying in instrument conditions, the flight crew acted swiftly, diverting to San Antonio International Airport, where the Embraer 145 touched down without incident, and saved the lives of those aboard the 50-passenger jet.

This article was originally published in the March 2022 issue of Air Line Pilot.