Proud to Fly—By the Numbers


ALPA has been a leader of environmental responsibility for decades, as its members recognize that as fuel and operational efficiency improve, the economic viability of the airline industry is boosted (see “ALPA White Paper Hails Aviation’s Green Accomplishments, Continued Progress”). The Association has a long track record of working with industry on new technologies like precision navigation capability, which enables direct, shorter routings instead of using airways; alternative, sustainable fuels; aerodynamic improvements like winglets and sharklets that increase aircraft efficiency; and more fuel-efficient, quieter, and more powerful engines. Today’s new engines produce seven times more thrust than early jet engines while burning only half the amount of fuel.

As remarkable as this progress is, the aviation industry—which contributes about 2 percent of the carbon emissions attributable to human activity while making significant contributions to the global economy—is actively working to further reduce aviation’s overall environmental impact. The industry’s goal is to achieve a 50 percent reduction of 2005 CO2 levels by the year 2050 via annual investments in research of $15 billion. Since 1990, the industry has reduced emissions by 50 percent—more than 10 billion tons of CO2—and has worked to improve fuel efficiency by 2.3 percent annually.

Flying from New York, N.Y., to Los Angeles, Calif., is far safer, faster, and more fuel efficient than riding a bus or driving a car or motorcycle on a per-person basis and results in less carbon dioxide emissions. Plus, after meal and lodging expenses and the cost of one’s time, it’s also the most economical. 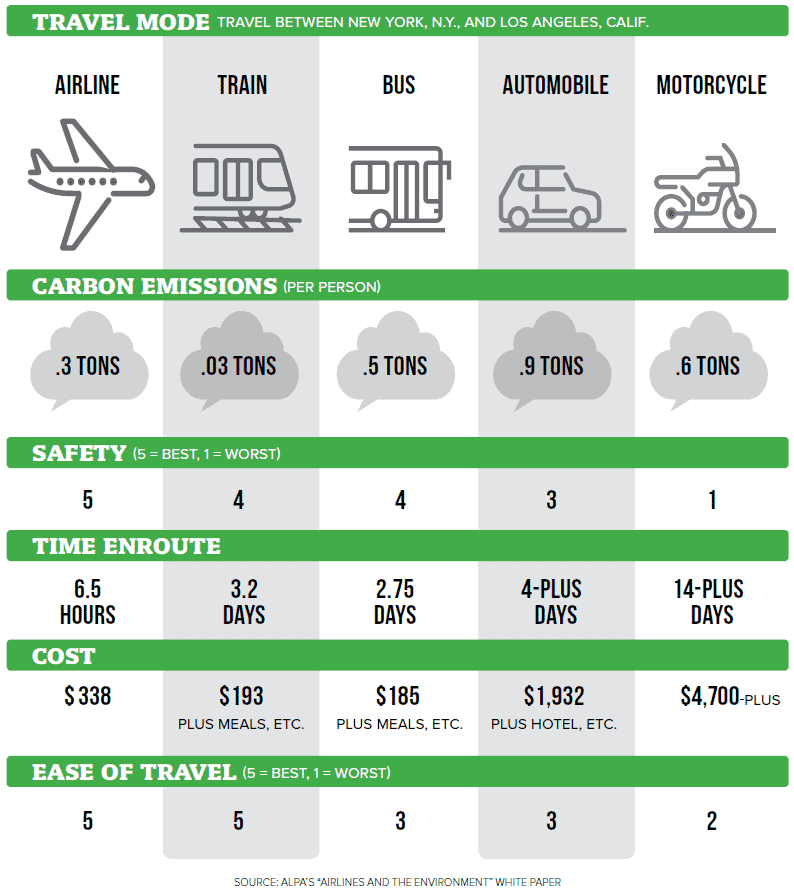