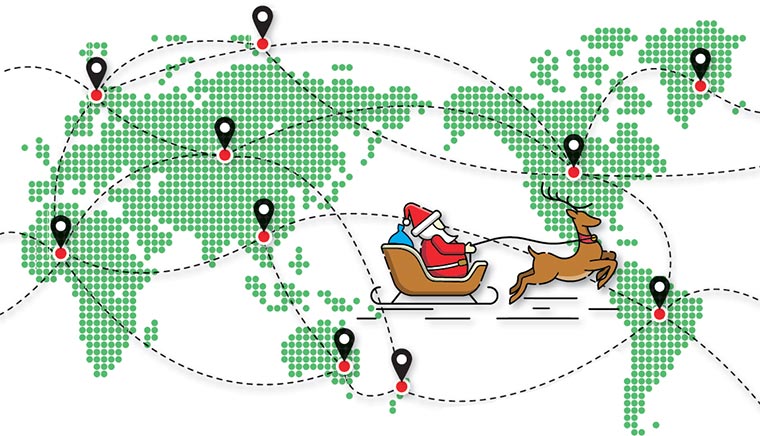 In addition to ALPA’s efforts to safely integrate commercial space and drone operations into the national airspace system, one night out of the year airline pilots must also share the skies with another unconventional transport—a reindeer-drawn sleigh. For the 64th year, the North American Aerospace Defense Command (NORAD), a joint U.S. and Canadian operation tasked with detecting aerospace threats to protect North America from air attacks, will be tracking Santa Claus’s Christmas Eve journey as he departs from the North Pole on his mission to deliver presents to children around the globe.

NORAD reveals that it’s the “only organization that has the technology, the qualifications, and the people to do it.” Coverage of Santa’s trek will be available on www.noradsanta.org and includes “Santa Cam” streaming video in addition to a call center. On December 24, travelers may call or text 1-877-HiNORAD (1-877-446-6723) to find out Santa’s whereabouts.

The tracking tradition purportedly began in 1955 when a Sears department store ad in Colorado Springs, Colo., directed children to call Santa as part of a holiday promotion. However, the listing contained a misprint and children were phoning the Continental Air Defense Command Operations Center, NORAD’s predecessor. Fortunately, the savvy crew commander on duty, U.S. Air Force Col. Harry Shoup, discovered what had happened and worked with his staff to accommodate the young callers.

In a public statement two years ago, the U.S. Department of Transportation confirmed it had “approved an application submitted by a Mr. Kris Kringle [dba ‘Santa Claus’] for special air transportation operating authority.” The statement continued, “The Federal Aviation Administration has inspected the unusual vehicle [identified as ‘Santa One’] and certified its airworthiness.” Late last year, CTV News, reporting on NORAD’s Santa tracker, disclosed the location of the North Pole. The network announced, “The Canadian government has revealed that Good Ol’ Saint Nicholas lives in Canada and pays taxes here.”

Safe travels to Santa and his crew, and happy holidays to all.