ALPA at 90: 'Schedule with Safety'


Editor’s note: This year marks the 90th anniversary of ALPA’s founding. As “the conscience of the airline industry,” the Association has been at the forefront of advocating for safety and security advancement to protect pilots and their passengers and cargo. In each issue of Air Line Pilot, a technology or topic that the union has championed will be highlighted.

Even before ALPA’s inception in 1931, airline pilots had been working tirelessly to establish reasonable limits for flight and duty time and develop rules that ensured adequate rest between duty periods. 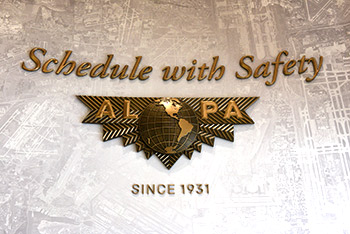 Early aviation was a dangerous business. Without a robust network of navigational and emergency facilities, pilots had to rely on their skills and judgment to ensure their safety and that of their passengers and cargo.

At the same time, airline owners and management sought to prove that their service was just as reliable as their closest competition—the railroads. According to historian George E. Hopkins in his book Flying the Line: The First Half Century of the Air Line Pilots Association, “Early airline pilots were made to feel that arriving on time counted for more than arriving safely, but late. Of course, everyone wanted both safety and regularity of schedules, but to the pilots it was evident that the two were not always compatible. The operators agreed in principle, although in specific cases the reasons given by pilots for canceling flights were not always acceptable to them, particularly if it cost the company money. It all boiled down to the question of ‘command authority’—who had it and when.”

The notion of forcing a pilot to fly against their better judgment became known as “pilot pushing.” While it predominately applied to weather, it also referred to fatigue.

In 1931, the U.S. Commerce Department set a monthly flight-time limit of 110 hours for pilots. While airline owners and operators wanted 140 hours per month, Capt. Dave Behncke, ALPA’s founder and first president, campaigned for 85 hours per month.

Prior attempts to regulate flight hours had fallen flat, but Behncke sought and obtained the backing of the larger labor movement through an affiliation with the American Federation of Labor (AFL). This action was crucial to ALPA’s coming under the jurisdiction of the National Labor Board (NLB), so much so that if ALPA hadn’t joined the AFL, it would have lacked the necessary connections to have its case heard.

After three years of intense lobbying, the NLB agreed with Behncke and ALPA, leading to Decision 83, which reduced the cap on flight time to 85 hours per month for pilots.

The ruling was an imperfect solution, however. After Sen. Bronson Cutting and four others were killed in the crash of a TWA flight in Missouri in 1935, ALPA began a campaign to enforce federal flight time policy, demanding the elimination of any waivers.

“TWA regularly flies its pilots more than eight hours,” Behncke said, “under a special waiver” granted to it by Director Eugene Vidal of the Commerce Department’s Bureau of Air Commerce. “ALPA made a detailed survey of waivers of flying hours following the recent crash on TWA, and we believe the eight­-hour maximum flight-time rule out of any 24 should be hard and fast, with no waivers.

“A tired pilot is an unsafe pilot,” Behncke informed the news media after the accident. “The pilots believe that fatigue is an important factor in accidents.”

Weeks later, the Department of Commerce canceled any and all waivers to the rule.

The flight-time limits of Decision 83 were later codified into law with the creation of the Civil Aeronautics Board (CAB) in 1938, which also established domestic flight-time rules, limiting flight time to eight hours in a 24-hour period. However, this would be increased to 30 hours per week in 1942 as pilots were desperately needed during World War II.

In the decades that followed, fatigue-related issues would mainly be limited to matters regarding international and supplemental air carriers. Between 1946 and 1982, the CAB and its successor agency, the FAA, would issue 30 proposals to amend flight-time limits.

Chief among them was a 1962 moratorium on a series of flight-time rules put forward by the FAA. More than a decade later, in 1976, ALPA sued the FAA to remove this moratorium. After several years of intense negotiations among ALPA, the airline industry, and the FAA, the agency published a rule on domestic flight-time/duty-time (FT/DT) limitations, the first successful rulemaking on this issue since the 1940s.

However, within several years, both airlines and pilots identified shortcomings and loopholes in the new regulations. The FAA again overhauled flight-time limits and minimum rest requirements for airline pilots in 1985, with ALPA raising several concerns that were ultimately addressed favorably in the final rule.

Sadly, a change to FT/DT rules wouldn’t occur soon enough, as on Feb. 12, 2009, Colgan Air Flight 3407, operating as a Continental Connection flight, crashed on approach to Buffalo, N.Y. Fifty people were killed, including all four crewmembers on board the Bombardier Dash 8-Q400; the 45 passengers, including a nonrevenue Colgan pilot; and one individual on the ground.

In June 2009, the NTSB investigation of the Colgan crash concluded, and the board issued 25 safety recommendations, including one (A-10-16) requiring airlines to address fatigue risks.

As a result, the Airline Safety and FAA Extension Act of 2010 was signed into law. The act, which ALPA championed, directed the FAA to set FT/DT limits and minimum rest requirements for both passenger and cargo airline operations based on scientific evidence regarding pilot fatigue.

On Jan. 4, 2012, the FAA published a final rule titled “Flightcrew Member Duty and Rest Requirements.” In that rule, the FAA created FAR Part 117, which replaced the existing flight, duty, and rest regulations for Part 121 passenger operations.

However, while cargo airline operations were included in the proposed regulations, the final rules omitted cargo based on a flawed cost-benefit analysis conducted by the FAA. As a result, all-cargo operations operating under Part 121 weren’t required to follow Part 117’s flight, duty, and rest regulations—a travesty ALPA has been working to correct ever since.

Since that time, the Safe Skies Act has been repeatedly introduced in the U.S. Senate and House of Representatives. If signed into law, the act would apply one level of safety to all-cargo operations by ensuring that cargo pilots have the same flight, duty, and rest requirements as their passenger-carrying counterparts to prevent dangers posed by fatigued pilots. The Safe Skies Act continues to be a top priority, and ALPA will work with the new Congress and the administration to have the law enacted.

“Airline pilots are affected by fatigue the same, regardless of whether we fly passengers or freight. It’s time for Congress to pass the Safe Skies Act and ensure one level of safety for all airline operations,” said Capt. Joe DePete, ALPA’s president.

In late 2020, after years of advocating for improvements, airline pilots in Canada secured strengthened science-based flight- and duty-time regulations as part of an effort to address workplace fatigue (see “A Step in the Right Direction: New Flight- and Duty-Time Regulations Launch in Canada”).

“These regulations are an important step in the right direction toward aligning us with the rest of the world and, above all, improve safety for passengers and flight crews alike,” said F/O Tim Perry, ALPA Canada president, regarding implementation of the new rules.

True to Behncke’s vision, “Schedule with Safety,” ALPA’s motto for nearly 90 years, continues to be the Association’s guiding force in every decision it makes.