A Primer on Jumpseat Policies 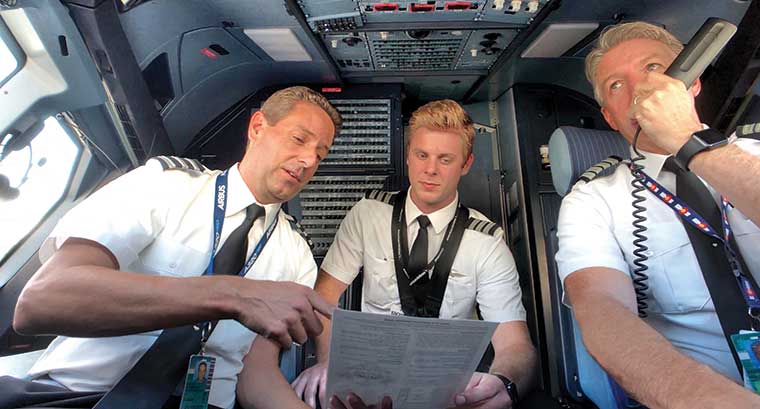 Today, most airlines maintain policies that extend the use of the flight deck jumpseat to both online and off-line pilots. However, this hasn’t always been the case as several years ago some carriers limited their use to FAA inspectors and company check airmen only.

Thanks to ALPA and other industry partners, these policies have been widely standardized and have become less rigid. But differences still exist from carrier to carrier.

The Cardinal Rule of Jumpseating

If a pilot is flying with a positive-space ticket issued by his or her airline, such as for training or a deadhead leg, he or she should never under any circumstance offer or agree to take the jumpseat, no matter what the gate agent indicates. Airline policies do not authorize employees to accept the jumpseat unless there are no other jumpseaters waiting for the flight deck seat.

The Cockpit Access Security System (CASS) satisfies the electronic employment and identity verification requirement to allow pilots of a participating airline to ride in the cockpit jumpseat of another CASS airline (a domestic U.S. carrier only). Jumpseat Committees of ALPA’s pilot groups will vet a CASS airline for viable reciprocity. So although a carrier is in CASS, it may not necessarily be authorized for a reciprocal jumpseat agreement with the pilot’s airline.

The Transportations Security Administration (TSA) no longer requires passports when using CASS, but individual airline policy may require them. Also, some airlines may require registration and posting of the pilot’s request on an additional website, such as myIDtravel.com or Id90Travel.com, or even by phone.

The dress code for using the jumpseat is uniform, business, or business casual, and check-in procedures vary by airport and airline. Allow sufficient time to check in at either the ticket counter or gate—or in some cases both. Consult the Airline Jumpseat Policies section of  ALPA's jumpseat website to learn more about the practices and policies of a particular airline.

All-cargo carriers have special procedures and require a pilot to list earlier than required for check-in with a passenger aircraft. Arrive on time as timeliness is vital. Delaying a flight may jeopardize a pilot’s future ability to fly with that carrier—and the ability of other fellow pilots at the air carrier.

In general, most airlines give priority to their own pilots first, and nonrevenue, standby passengers are usually given priority over jumpseaters.

Seniority, first come/first served, or a reservation system may be used for company and off-line pilots. Within boarding priority, most airlines accommodate off-line jumpseat riders on a first-come, first-served basis. Some airlines give priority to pilots of code-share partners ahead of other off-line pilots. Remember that reciprocal jumpseat agreements are in place primarily to assist pilots commuting to work and should be considered when determining priority for flight deck access. Any problems that arise should quickly be referred to the captain to resolve.

These policies are in place for a variety of reasons, including discouraging jumpseat abuse. Off-line jumpseat rider abuse includes, but is not limited to, individuals who occupy a jumpseat at their company’s request, use of the jumpseat for reasons other than commuting to or from work or for other than personal travel, and attempting to access or accessing the jumpseat by intentional deception or omission of facts. In addition to denying access to the jumpseat, a pilot should immediately report suspected or known instances of jumpseat fraud to his or her pilot group’s master executive council (MEC) jumpseat chair, security chair, or coordinator, as appropriate.

Regarding vetting, consult the Airline Jumpseat Policies section of our jumpseat website to learn more about the practices and policies of a particular airline.

Jumpseating requires professional conduct at all times. Be courteous to agents when requesting the jumpseat, and always ask the captain’s permission and say thank you for the ride, even if given a seat assignment and occupying a cabin seat.

Pilots should never let an agent rush them past the cockpit without asking the captain’s permission.

Jumpseating is not the same as nonrevving, even if the pilot is seated in the cabin. The pilot is considered an additional crewmember and should conduct himself or herself accordingly.

If sitting on the flight deck, a pilot should keep his or her eyes and ears open; an additional crewmember is a valuable safety asset. Jumpseaters should turn off cell phones when entering and wear a headset. Sterile cockpit rules, which are in effect at 10,000 feet and below in the cockpit environment (and, in some cases, above 10,000 feet also), should be observed, but speak up when necessary. Reading, talking, and other nonpertinent activities are prohibited when jumpseating.

Jumpseaters may also serve as a security asset by helping with flight deck door openings and, in an extreme case, protecting the flight crew from an assault on the flight deck.

ALPA’s Aviation Jumpseat Committee’s “No Pilot Left Behind” initiative helps ensure that every pilot who needs a seat on the aircraft gets a seat, whenever possible, in accordance with the captain’s regulatory discretion. This program encourages captains to approve and authorize each and every jumpseat request, challenge gate agents for boarding information at “show” time, and check with the gate agent prior to departure to protect the jumpseat privilege.

Captains are also asked to “make the walk” from the cockpit to the gate entrance to determine if any eligible flightcrew members are in need of a ride.

No matter how rushed, the pilot should thank the flight crew when deplaning. It’s a professional courtesy—and even policy at some airlines—for nonrevs, including jumpseaters, to deplane last and stay out of the way of revenue passengers.

In 2012, the TSA lifted the restriction on off-line pilots occupying the jumpseat on international flights. As this issue of Air Line Pilot goes to press, ALPA is working to address a number of logistical hurdles and anticipates that international jumpseating will again be a reality in the near future. Until then, an off-line pilot may only occupy a seat in the passenger cabin when traveling internationally; some airlines may offer a first- or business-class seat. Keep in mind that most airlines that allow jumpseating in the cabin internationally require check-in 75 to 90 minutes before departure to satisfy TSA requirements. Individual airline requirements are listed in each airline’s procedures, which are available on our jumpseat website and on ALPA’s mobile app under the Jumpseat tab.

ALPA will maintain its position of PIC authority regarding access while establishing and maintaining international jumpseat agreements.