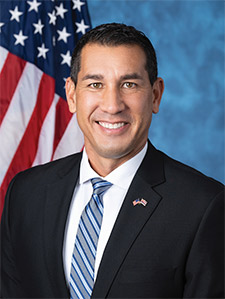 Nearly five years ago, I completed my father’s term in the Hawaii State Senate. A former Marine and a native Hawaiian, my dad died when he was just 73. He was proud of what I had accomplished as a pilot flying for both the airlines and the armed forces, but he also knew that, at 41, I had more to offer. Two days before he passed, he asked if I’d consider continuing his legacy as a public servant, if his “time were to come.”

This request caught me by surprise. It wasn’t part of my original flight plan, but sometimes life presents its toughest challenges when you least expect them. My wife, a flight attendant with Hawaiian, was seven months pregnant with our third daughter. Because it was my father’s dying wish, I responded without hesitation, and on Feb. 17, 2016, I was appointed by the governor of Hawaii to fill the vacant senate seat.

Since then, I was reelected to the position twice, and just last month the people of Hawaii voted for me to represent the state’s 2nd Congressional District in the U.S. House of Representatives. When sworn in as a member of the House next month, I’ll be the second native Hawaiian to serve in Congress and its only current commercial airline pilot and ALPA member.

While I’m proud and excited about this new opportunity, I fully recognize that it’s not so much an achievement as it’s a beginning—and that I have a lot of work to do. My fellow representatives and I have much we can accomplish together.

As I prepare to take federal office, I’ve thought about how I can be most productive. I’ve spent the bulk of my adult life in the cockpit flying for Hawaiian Airlines and the Hawaii Air National Guard supporting the U.S. Air Force. I’m not a career politician; I’m a career pilot and want to apply this set of knowledge and skills where it can be of the greatest value and use.

Accordingly, I’d like to take on issues related to aviation and the airline piloting profession. As a member of ALPA, I know the challenges airline pilots face on the line each day. I understand the consequences of abandoning flight deck training minimums and the need to maintain current cockpit crew complements, and I fully appreciate the emphasis our Association places on safety and security. In addition, I recognize the importance of making sure our profession remains a desirable career choice and the need to keep U.S. airline flying jobs in the United States.

I’ve reached out to the House leadership to express my strong desire to serve on the Transportation and Infrastructure Committee. While I have other aspirations related to my military duty and priorities for Hawaii, I believe I can contribute significantly to the committee, offering an airline pilot’s perspective to aviation industry policymaking.

One of the core values the Air Force has instilled in me is “service before self.” This phrase highlights the importance of “duty” and the obligation to perform what’s required to complete the mission, “loyalty” and the need to commit to the success and preservation of something larger than ourselves, and “respect” as it relates to valuing others as individuals and treating them with dignity.

These concepts are reflected in ALPA’s Code of Ethics and Canons, but they have a broader application. Whether serving as a member of ALPA, the military, or Congress, it’s important to set aside differences and work together to accomplish the greater good.

As I prepare to join the 117th U.S. Congress this January 3, I want you to know that I’ll champion U.S. aviation issues and pilot priorities. In addition to ALPA-PAC and the Association’s Legislative Affairs pilot volunteers who lobby members of Congress, you’ll have one more voice speaking in support of our industry and our profession, and I look forward to serving both you and the American people in this effort.