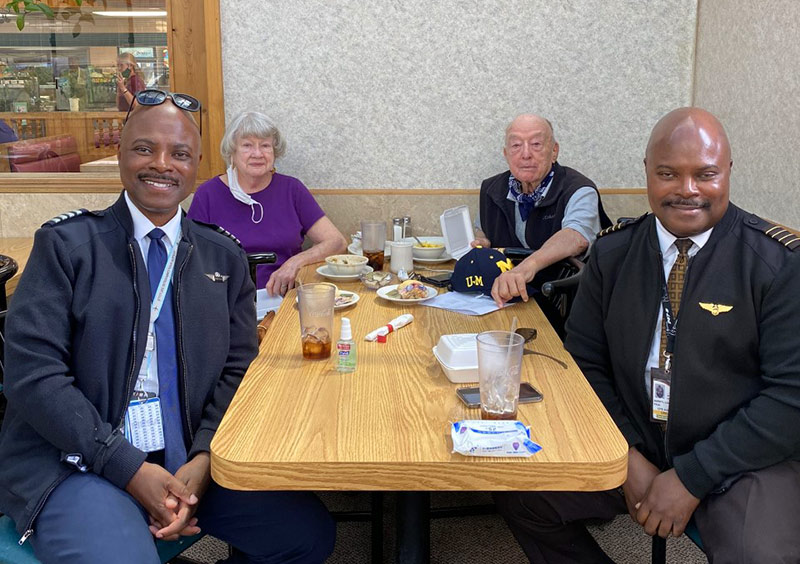 Capt. Darin Paul (Mesa), left front, has lunch with his brother Darryl and the man who mentored them both, Richard Bonk, along with Bonk’s wife, Barbara.

One day our parents sent my twin brother, Darryl, and me to Florida as unaccompanied minors on a flight. As we were boarding the airplane, the captain noticed us and brought us to the cockpit and we met the first officer and flight engineer. It was really something seeing all the lights and switches on the instrument panel. At that instance, we both said we wanted to become pilots.

Although I spent a career as an FBI special agent, I never lost the desire to be a Part 121 airline pilot. So when I retired from the FBI, I went to work for Mesa Airlines. Along the way on my journey to the flight deck, I was inspired by three individuals.

“Iceman” Kevin Locke, an American Airlines captain, provided the initial inspiration and mentoring to me, a young neighbor kid; my primary flight instructor, Richard Bonk, helped me deal with an accident we suffered and kept me flying; and Darryl, who went on to become a UPS B-747 captain, mentored me through Mesa’s training program and continues to do so.

Kevin grew up next door to us. He was an autoworker in a General Motors factory in Detroit, Mich., and was invited by a coworker to sit in the back seat during a flight lesson. It was then that he decided he wanted to be a pilot. Having dropped out of college, he inquired about joining the U.S. Air Force and was told he needed a degree to become a pilot. He reenrolled in college, earned his degree, and later joined the Air Force and became an aircraft commander on the C-141 Starlifter.

On leave, he’d come home and drive to the local airfield with Darryl and me and help us in the simulator as we worked on our instrument ratings. Our mothers were best friends, and we always looked up to Kevin and his older brother, Steve. Seeing Kevin’s focus once he discovered his purpose provided me that first inspiration to fly.

One of the highlights of watching his career was UPS’s introduction of MD-11 service at Detroit Metro Airport (DTW). As kids, Darryl and I would often go to DTW on the weekends to stand on the observation decks (back when you could do that sort of thing) and watch and listen to the airliners coming and going.

To show how green we were at the time, we’d hear things like “Northwest, turn left on golf then hold short of hotel,” and we’d say to ourselves, “They want him to turn at that golf course on the other side of the fence and stop in front of the hotel.” Once we started taking lessons and recalled that conversation, we were happy no one was standing close enough to hear us.

During my time at the FBI, Darryl would frequently call me and tell me about the regional airlines that were hiring, and I’d always say I was too close to retirement to walk away. During those times, I’d reflect and wonder if I’d ever get the opportunity to fly an airliner. As I got closer to retiring, I’d often look out the window from the 25th floor of my office building and see the airliners coming into DTW. Even when I was flying FBI birds, I’d wish I was flying for an airline. I never thought it would happen. 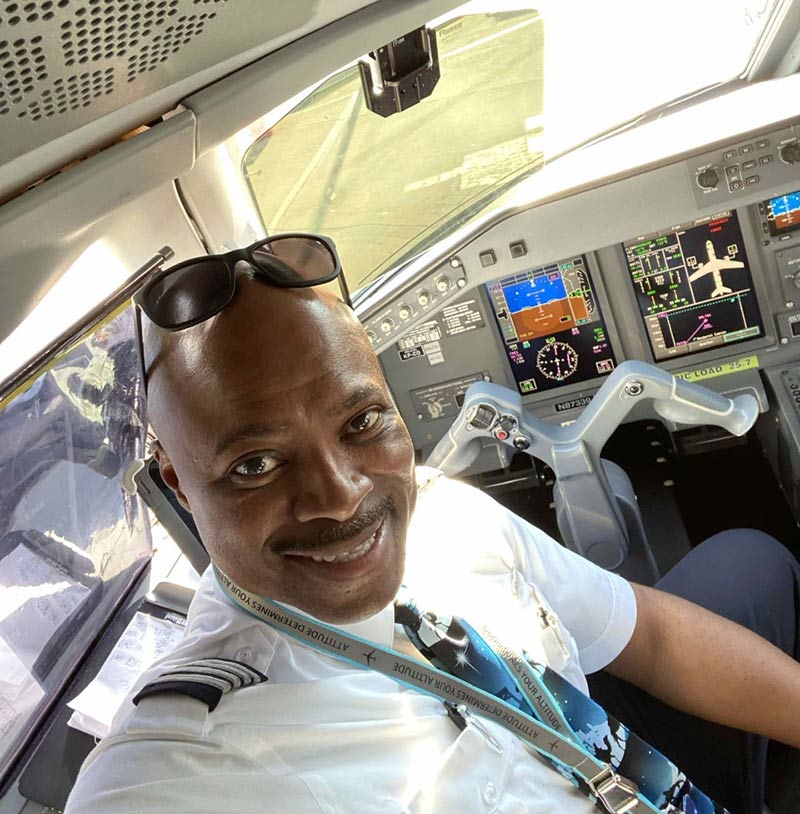 Paul prepares for takeoff on the flight deck of a Mesa aircraft.

When I finally decided to retire from the FBI seven years prior to the mandatory retirement age of 57, I did so hoping I’d be young enough to get in 15 years as an airline pilot. I was apprehensive and didn’t know if I had the “right stuff.” But I decided there was only one way to find out.

I’d always helped my brother run his Organization of Black Aerospace Professionals Delta ACE Camp in Atlanta, Ga., and one of our campers, Willie Riley, had gone on to become a regional airline captain for Mesa. He stayed in touch with us, and Darryl told him I was looking to retire from the FBI. Darryl said I should call him, and Willie asked me to apply with his carrier and to let him know when I did. I interviewed with Mesa and was offered a job. The next day I put in my retirement paperwork with the FBI.

Mesa paid for my ATP and put me on a path to becoming a Part 121 airline captain, which I now am.

All throughout my airline pilot training, Darryl encouraged me by showing up at the training facility on his days off, helping me study, and explaining some of the Part 121 regulations and operations specifications. His efforts helped me successfully complete training and initial operator experience.

Darryl told me everything to expect in each phase of training at Mesa. He continued to help me study and showed me how he used his cockpit cutouts to review and arm-chair fly before his trips and his simulator sessions. I incorporated that knowledge into my own training. He continued to mentor me as I became a captain at Mesa.

Even with Darryl’s encouragement, I may not have become an airline pilot if it wasn’t for Richard Bonk—and some miscommunication with my father.

May 3, 1987, was my scheduled final dual cross-country flight with Mr. Bonk. Darryl had flown his flight on the day before in the same plane, N60023, a Cessna 152. On the final leg of our trip, we suffered a catastrophic engine failure and landed on the front lawn of Chrysler World Headquarters. The accident was the result of a fractured cylinder head that separated and caused a rod to exit the engine.

I had thoughts of never flying again. But Mr. Bonk helped me in the aftermath to regain my composure. He told me that we had to get back in the plane because if we didn’t, I’d never fly again.

My father was out of town when the accident happened, and I spoke with him by phone that night. He said something that made me continue flying when I didn’t want to. He simply asked, “So you’re going to quit?” I knew then that I couldn’t quit because he’d be disappointed in me.

Years later, we talked about that day and I asked him if he remembered asking if I was going to quit. He said he did. I admitted, “I was going to until you asked me that.”

He laughed and told me he asked because he would have quit if that happened to him. He was essentially asking, “So you’re going to quit, right?” Had he finished the question with “right,” I likely wouldn’t be a pilot today.

But I continued and even gained from that experience. The pilots at the FBI would say, “If you want to make sure a preflight is done right, have Darin do it.” That was part of the carryover from the accident. I became meticulous about preflights, engine run-ups, monitoring parameters, etc.

It took all three of these men—plus so many more along the way—to get me to where I am today, and I’m grateful for everything they did to turn my dream from a possibility into a reality.

And today I’m so proud and humble when FBI agents board my flights and check in and I show them my FBI special agent retirement credentials and welcome them aboard.


Tell Us About Your Mentor

Do you have a person(s) who inspired you to become an airline pilot? Click here for information about sharing your story. It may be featured in Air Line Pilot, in ALPA’s blog, or via social media.