The Luck of the Draw 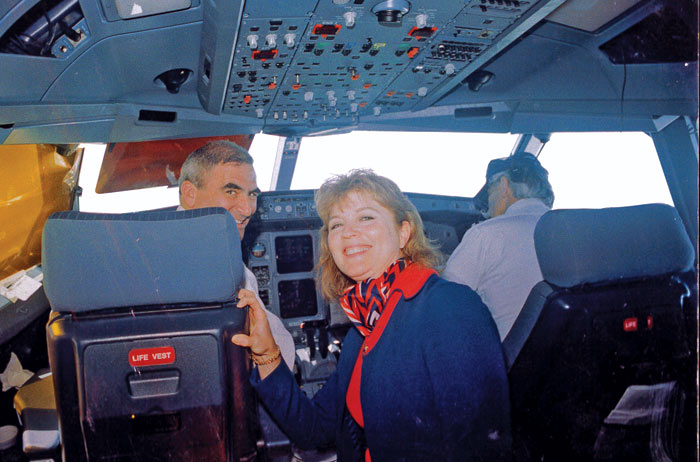 Janice Litt revisits her flight attendant role from the 1970s on her husband Eric’s final flight.

My final flight was on Aug. 30, 2001. I would be 60 on August 31, so I worked right up to the end. My last leg was London’s Gatwick Airport to Philadelphia International Airport flying an Airbus A330, and I was lucky enough to have my wife, Janice, and my daughter along on my last trip.

I met Janice in late 1972. I was hired by Mohawk Airlines in December 1964, and we merged with Allegheny in April 1972. Janice was a stewardess at Allegheny—yes, they were still called stewardess at the time, though Janice always referred to herself as a “sky goddess.” From the first day I saw Janice, I was in love with her—and I still feel the same way today.

The New York crew base that I was assigned to closed after the merger with Allegheny and I moved to Washington, D.C. I first met Janice on a trip we were both working, flying to Wilmington, Del., then again three months later on a four-day trip in a CV-580. I thought to myself, “She’s a keeper,” and I started courting her. I had to do a bit of walking on eggshells as the new kid on the block, though—especially since her father, Henry Nash, was the Washington, D.C., base chief pilot. But we married in August 1974 (about a year later). Since we were both on reserve status, we saw little of each other until Janice soon “retired” to motherhood.

It’s been 19-plus years since my final flight, and I’m sure that the statute of limitations has expired so the guilty are protected and I can share this story. On the last leg of my final flight, Janice put on her Allegheny stewardess uniform, did cabin service, and even served us in the cockpit. The other flight attendants on the trip commented about how she still fit into the uniform after 27 years and three kids. It was a nice surprise for me that she did that and a great way to come full circle on an amazing career.

I remember flying for Mohawk and sitting in John F. Kennedy International Airport on a winter day with a cold rain falling. The CV-240 had leaked on the ground before engine start and pressurization. I was on clearance listening to airlines going to Montego Bay, Jamaica; Paris, France; London, England; Mexico City, Mexico; and California—and I had a clearance to Utica, N.Y. That didn’t matter to me, though. I was flying for an air carrier, and if it had an Indian head logo on the tail (Mohawk’s logo), nothing else mattered.

It’s the luck of the draw. Some pilots rode the trough, some the crest. I was most fortunate to be on the crest for the majority of my career. As baseball great Satchel Paige once remarked, “Don’t look back, someone may be gaining on you.”

This article is just one in the My Final Flight series in which our retired pilots share the memories, emotions, and celebrations of their final flights as professional airline pilots. Read more stories.

In the past, we’ve also solicited members stories on first flights and flying families. What should be next? If you have an idea for a member-focused series, e-mail Communications@alpa.org with your suggestions.