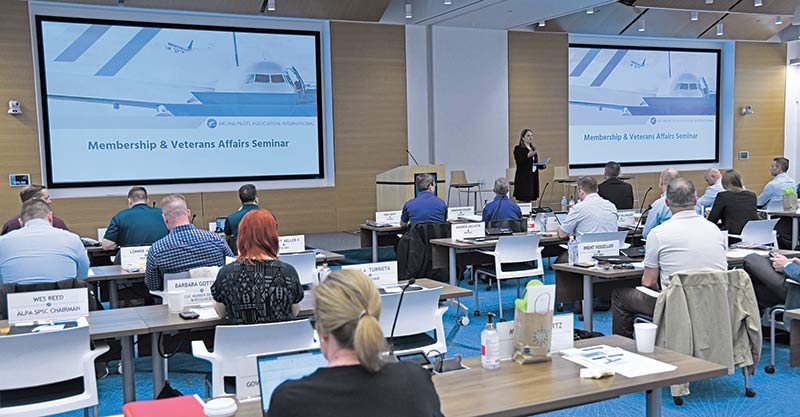 ALPA has 62,000-plus members, composed of U.S. and Canadian members; captains, first officers, and second officers; cargo and passenger pilots; and mainline, fee-for-departure, and ultra-low-cost pilots. As such, each ALPA member has different needs, expectations, and requirements.

This is the environment in which ALPA’s membership volunteers operate. Their job within their master executive council’s (MEC) Membership Committee is to connect their pilots with the appropriate resources within ALPA’s vast toolbox. And with each pilot being different, it’s imperative that they know how to connect them to the right ALPA resource at the right time in their careers.

With that responsibility in mind, the Membership and Veterans Affairs Seminar was held on March 2–3, bringing together more than 40 pilot leaders from 18 MECs to learn more about ALPA members, ALPA resources, and the all-important process that connects the two. Capt. Kandy Bernskoetter (FedEx Express), chair of ALPA’s Membership Committee, led the event that focused on the duties of the position and best practices in making those connections.

“I don’t know if there’s a more important thing for our members than understanding everything ALPA has to provide to them,” said Capt. Joe DePete, ALPA’s president. “You’re the touchpoint for the members when it comes to our Association, so your work is immensely important.”

Attendees learned that they don’t need to know everything about ALPA—just who to ask if they don’t know an answer to a particular question. Presenters emphasized learning from each other and making use of ALPA’s toolbox of professional staff. “There are people who’ve been doing this for years and have seen what you’re seeing and what you will see,” emphasized Capt. Bill Couette, ALPA’s vice president–administration/secretary. “Seek them out, look for them, and network with them. You may have ideas for what can better serve the members at your airline and they can offer the support and historical perspective to help you reach that goal.”

The seminar started with a nuts-and-bolts look at the basic duties that go with the position: leading new-hire presentations about ALPA, updating member classifications, keeping members active and in good standing, and understanding membership reporting.

The three overarching tasks for a Membership Committee chair, Couette explained, are to connect with members, communicate member benefits, and identify volunteers. This starts at the new-hire meetings and continues throughout a pilot’s career.

“Be a resource,” encouraged Couette. “Be a resource to your MEC, your members, and your Association. Your attention to member records is what keeps members connected.”

Knowing your members and understanding their differences is a key attribute required of membership volunteers. Referring to ALPA’s 38 pilot groups, Couette commented, “That’s 38 different cultures, each one with its own differences.”

Guest speaker Phil Comstock of Lescault and Waldeman, Inc., a longtime pollster for the Association, presented an in-depth analysis of a typical ALPA member based on his years of polling and how membership volunteers can use that knowledge to connect with pilots.

He pointed to a “tremendous amount” of membership movement within ALPA recently due to regular retirements, voluntary early retirements during the pandemic, and the hiring shuffle that’s resulted. “I’ve never seen anything like it,” Comstock said. “It’s like a whole new membership.”

Comstock’s polls indicate that ALPA pilots have a “positive and powerful mindset” and that pilot sentiments since December 2019 ranged from “cautiously optimistic to confidently optimistic—never pessimistic.”

Moreover, he showcased the wide acceptance of ALPA’s COVID-related agreements to reduce or eliminate furloughs and how strongly they were supported by members. Due in part to this focus on keeping pilots on property, what he termed “low longevity” pilots have become strongly supportive of their union. ALPA has a “unique view of how a union should operate, and I think that’s why you’ve been so impressive.”

Comstock pointed to the last two years as “a great demonstration of ALPA working for its members.” He praised those MECs that added mentorship programs as well, saying, “It will pay tremendous dividends for you,” noting, “You have the most fertile ground for internal organizing that I’ve ever seen at ALPA.”

Following Comstock’s presentation, F/O Camila Turrieta (JetBlue), chair of ALPA’s President’s Committee for Diversity and Inclusion (PCDI), discussed diversity within ALPA. She pointed out that many think of diversity in the categories of race, ethnicity, gender, and sexual orientation; however, other factors also differentiate ALPA pilots and their current needs such as age, military status, position, marital status, family issues, and more. These factors can and do change throughout a pilot’s career, often with new circumstances taking the place of previous ones. Turrieta noted that a recent PCDI survey showed that 66 percent of respondents stated that they’ve had some sort of diversity and inclusion issue in their career.

“This is an indicator that we still have a lot of work to do as an Association to support our members,” she said. “ALPA leaders have no say in who airlines hire, but we recognize the diverse makeup of our current membership and we’re in a position to encourage future members to know that our profession is accessible and welcoming. Your role in welcoming new members to our union and encouraging them to become involved in ALPA, regardless of differences, helps to strengthen our union, and it also models our inclusion efforts.”

Attendees also discussed how to use their knowledge of ALPA resources and this insight into ALPA members to help connect the two.

While Comstock’s research showed that roughly one-third of MEC members are what he terms “activists,” the remaining two-thirds can fill what he terms a “silent majority.” His polls show that 8 percent of ALPA members say they’re “very actively involved,” while another 27 percent say they’re “somewhat actively involved.” Those numbers, he added, are double what most labor unions see.

He cautioned attendees not to ignore the silent majority. “Communications get through to them if they’re clear and consistent,” he said. What’s more, “Roughly 75–85 percent of respondents said they think their MEC does a good or very good job”—with that number often soaring above 85 percent during contract negotiations.

“That can be surprising since you rarely hear from many of your members,” he said, but it’s a sign that messages do get through. “Can you communicate too much with the pilots in your MEC?” Comstock asked. “The answer is no.”

“By gaining a greater understanding of all ALPA members and the vast resources available, membership volunteers can now take this information back to their MECs to make stronger connections, have a greater impact, and be a constant resource to their colleagues—to every different one of them,” remarked Bernskoetter.

While all ALPA members are different, there are also two areas in which the differences are of a more formal nature. Canadian membership offerings can differ, and this requires specialized knowledge. There are also laws in place in the United States protecting ALPA members who are or have been active military members. ALPA’s Veterans Affairs Subcommittee, which falls under the national Membership Committee, deals with these issues, and many master executive councils have their own Veterans Affairs or Military Affairs Committees.

To address these differences, attendees of the Association’s Membership and Veterans Affairs Seminar split into three separate breakout sessions: Canadian pilot volunteers, Veterans Affairs volunteers, and U.S. volunteers. This allowed for both specialized presentations as well as closer networking between pilots with similar responsibilities.

Pilots in the breakout sessions learned about ALPA member insurance offerings and how they differ in each country, ALPA’s Pilot Assistance programs and how they vary, the Association’s engagement in Congress and in Parliament, how member dues dollars are allocated, and special union-only discounts available in each country.

Capt. Wes Reed (FedEx Express) led the Veterans Affairs breakout. He and staff presenters provided an overview of the Uniformed Services Employment and Reemployment Rights Act (USERRA), members’ rights under the act, and their role in helping protect their military members.

The pilots learned about veteran-specific topics such as disability issues, the legal requirements of USERRA, retirement and insurance benefits under both the act and the pilot contract, and best practices. They also shared best practices and success stories to provide inspiration and guidance in their future work.