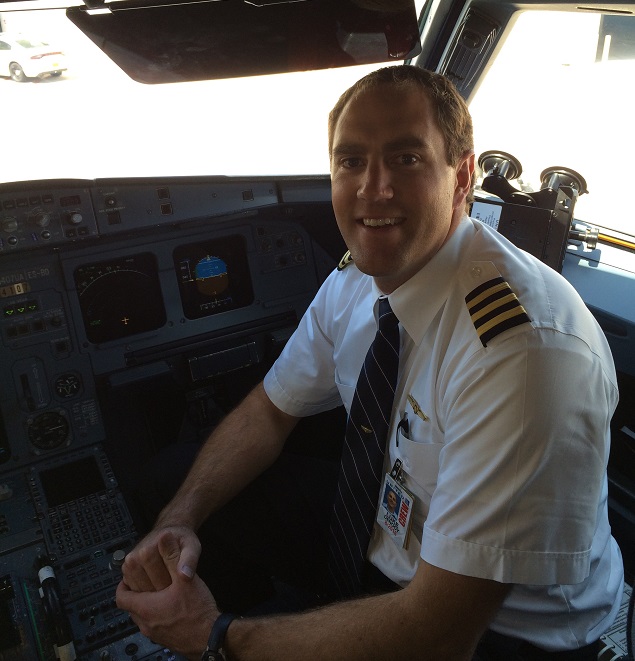 And the tragedy of 9/11 could not deter him. “I was in high school at the time and as we were driving to school, the events of that tragic day began to play out,” he explained. “Even though I lived halfway across the country and didn’t know anyone directly involved, I knew the impact it had on myself, our country, and the aviation community.”

His dream continued. “My path to becoming a pilot started in college, when I began taking flight lessons,” he said. “From the beginning, I knew I wanted to pursue a career in aviation. I transferred to Metro State and began my degree in Aviation Technology.” There, he received a grant from the Capt. Jason Dahl Scholarship Fund in 2007.

“Receiving the Jason Dahl Scholarship was an amazing and humbling achievement,” he said. “I was at a point in my flight training where I was trying to build as much flight time as possible while working toward my flight instructor ratings. The money I received from the scholarship played a huge role in helping me finish my training, as well as continue to build flight time. This was a huge help in getting hired at my first airline and beginning my career.”

His airline career started after his 2008 graduation with a job at Great Lakes Airlines. He was hired by Frontier Airlines in 2013 and then United in 2014. As a current United pilot, DeNooy said he feels an extra kinship with Capt. Dahl. “I was so grateful for the opportunity when I was hired at United,” he explained, “not only because it had been a career goal of mine, but it also meant a great deal as a past scholarship winner. I am honored to help in a very small way to carry on the legacy of Captain Dahl at United.”

“It was truly a humbling experience to be recognized for a scholarship in the honor of one of the heroes of that tragic day,” concluded DeNooy. “The purpose of the scholarship is to help students reach their dreams. In my case—and so many others—that is exactly what happened.”