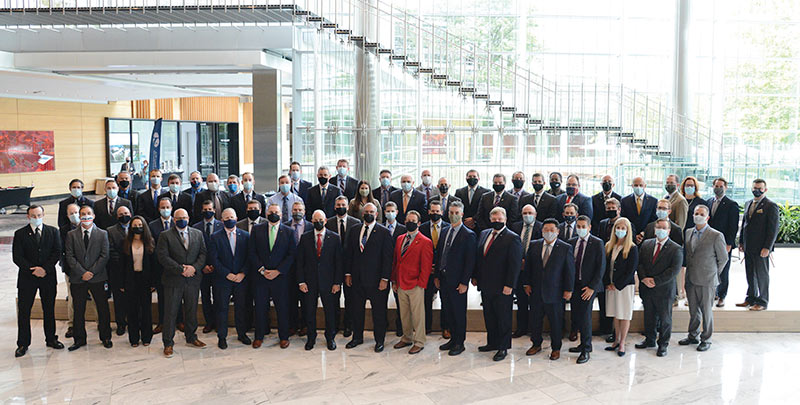 However, the COVID-19 pandemic compelled the Leadership Committee to adjust its plans for 2021. Pilot leaders who attended the one-day virtual conference in February and those who took office since then were invited to attend an in-person session in late September.

During his initial comments, F/O Mark Lockwood (Delta), the Leadership Committee chair, told attendees, “We’ll build on the information covered during the February virtual conference for those of you who joined us, and our goal will be to give you a forum to take advantage of the essential tools and resources available to you to carry out your responsibilities as elected leaders.”

“In this new role you have, you’ll likely work on a wider range of issues and will develop a broader perspective than you’ve ever experienced as a line pilot,” said Capt. Joe DePete, ALPA’s president, during his opening remarks. “Your new position will require you to inspire others to create a shared mental model of what success looks like for your pilot group. You’ll also need to lead collaborative efforts to identify solutions to challenges and build the unity that’s essential to moving those solutions forward.”

ALPA local council officials play a crucial role in the Association’s operation and system of governance. In addition to serving as the face of the union for pilots at their airlines, elected local leaders who are also status representatives (i.e., captain, first officer, seniority block, and instructor status) serve as members of their pilot group MECs as well as ALPA’s Board of Directors, the Association’s highest governing body. This tiered responsibility requires them to act in the best interests of the local pilots they represent as well as the union as a whole.

Local council reps and LEC officers serve three-year terms, which are staggered over a three-year period so that annual elections impact only one-third of the local councils. This approach ensures that at any given time, two-thirds of ALPA’s local council leaders remain in office and are available to convene during periods of crisis and other emergency situations.

Couette, who oversees the Leadership Committee, presented a segment titled “You’ve Just Been Elected…Now What?” in which he drew from his experience as a five-time local council rep, offering tips and highlighting what to expect from the job. “Try to network and talk to one another,” he said, encouraging conference participants to make contact with pilot leaders from other carriers and to use them as future resources.

Couette stressed that many of ALPA’s pilot groups, regardless of the aircraft they fly, the type of airline operations, or the size of their group, experience the same challenges. Discussing previous events can help resolve current problems. “By sharing information, it just puts you that much further ahead in the game,” he observed.

During the segment, Couette noted that most local council reps spend the bulk of their time communicating with their members, representing pilots in governing body meetings and interactions with their companies, recruiting ALPA volunteers, and “being a real-time ALPA and MEC resource.”

Conference attendees learned how to prepare for and conduct ALPA meetings, and the importance of referring to the ALPA Constitution and By-Laws, Administrative Manual, MEC policy manuals, and Robert’s Rules of Order when questions arise about procedures. The group discussed the use of strategic planning to establish agreed-to goals for the union as well as a designated path to achieve them. As part of both these exchanges, the pilots engaged in breakout sessions to apply and reinforce what they’d learned.

Andrew Shostack, assistant director of ALPA’s Representation Department, reviewed the different stages of collective bargaining and the importance of maintaining unity throughout the process. He stressed the need to educate pilot members about negotiating goals and to keep them informed of what’s happening during each phase of the proceedings. “If they don’t know what they’re fighting for, they’re not going to fight,” Shostack asserted.

Maintaining an ongoing dialogue with ALPA members is essential for the Association to be successful, and David Weaver, director of ALPA’s Communications Department, reviewed the key elements of effective messaging. “Pilot group communications must build consensus, keep pilot interests at the forefront, ensure that all members are on the same page, help the MEC to accomplish its goals, and quell rumors.”

Participants learned about the duty of fair representation as it applies to the Railway Labor Act in the United States and to the Canada Labour Code. “Violations occur when the union engages in representational conduct that is arbitrary, discriminatory, or in bad faith,” said Jonathan Cohen, the Association’s general counsel and director of ALPA’s Legal Department.

They also reviewed the need to maintain the status quo during collective bargaining, including discouraging premature job actions and deterring individuals who want to act independently.

In addition, presenters covered the vast ALPA resources available to help pilot leaders conduct their business, including access to the Aviation Medicine Advisory Service (ALPA’s Aeromedical Office), polling systems to gauge member interest and support, and the many departments and professionals who can provide support and consultation.

F/O Anne Worster (United), the Council 11 F/O rep in Washington, D.C., said she and her husband, also an ALPA member, are “empty nesters,” now that their daughter is in college. “I felt like I could devote the time required to help and become more involved in the Association,” she said.

Capt. Peter Noh (WestJet), who was recently elected secretary-treasurer of Council 227 in Vancouver, B.C., noted, “I just want to make a difference. Rather than shy away from the toughest time since 9/11, I thought I’d get involved.” Noh, who shared that he felt inspired by what he’d seen so far, remarked that he attended the conference “to make sure I had all the resources to help me continue on with that inspiration.”

When asked why he ran for the Council 61 captain rep position, Capt. Brett Howiler (PSA) talked about the challenges his pilot group has faced with its Aviation Safety Action Program (ASAP). “I ran for office in part to advocate for additional training for the members of the Event Review Committee, who process ASAP reports, in the hopes of improving the program’s communication and performance.”

F/O Jill Hunter (Frontier), Council 167’s interim F/O rep, said she filled the position in July after a friend who previously held it transitioned to the pilot group’s Negotiating Committee. “I came to this conference because I’m new to the job and because I want to learn more,” she remarked, adding “and I’ve learned a lot.”

F/O Greg Pinckney (Western Global), the temporary MEC chair for Western Global—one of the union’s newest pilot groups—noted that he hopes to engage with management personnel to help them better understand the pilot perspective and ultimately improve the carrier’s working environment. “I want to right wrongs…. I’ve put time into this company and I like what I do.”