ALPA Leaders Learn ‘How They Can Best Serve Their Pilots’ 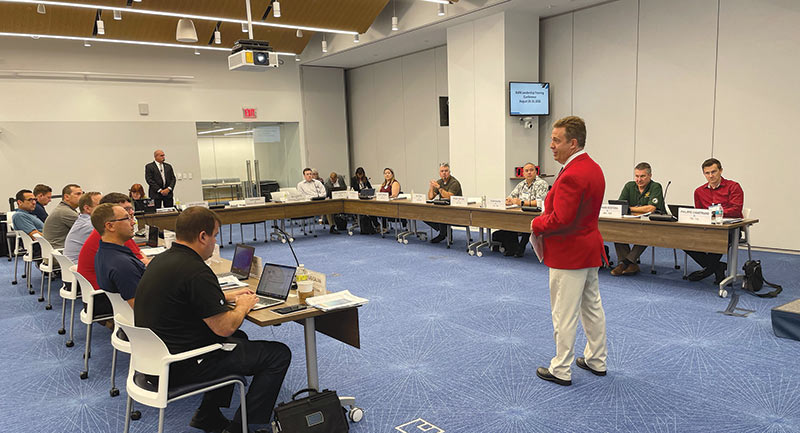 It takes more than just a very particular set of skills and a caring personality to be an effective pilot leader at the local council or master executive council (MEC) level. That’s why ALPA hosted its second Leadership Training Conference of 2022 on August 23–25 at its McLean, Va., offices. Status reps and local executive council (LEC)/MEC officers from 12 pilot groups attended to learn about the essential resources ALPA provides to help them represent their pilots effectively.

While most newly elected status reps/LEC officers take office March 1 and participate in the Leadership Training Conference typically held in February, some are unable to attend, and others are elected after that date. The goal of the August conference was to prepare these new pilot leaders for their roles, including the work they’ll do as Board of Directors (BOD) delegates at the biennial meeting in October.

“A common misconception is that the conference is designed to create leaders,” explained F/O Mark Lockwood (Delta), ALPA’s Leadership Committee chair, who facilitated the meeting alongside committee member F/O Glen Gorrie (WestJet). “That’s not the case. It’s to train pilots who are already leaders to lead within ALPA.”

For status reps, this entails multiple duties. “You serve the pilots of your local council, your pilot group as an MEC member, and our union as a whole as a member of the BOD—ALPA’s highest governing body,” said Capt. Bill Couette, ALPA’s vice president–administration/secretary. He gave presentations on local council leaders’ core responsibilities, planning and running an ALPA meeting, and the business they’ll conduct at the BOD meeting. Throughout, he emphasized that ALPA leaders aren’t expected to know everything or do it alone. “During this conference, you’ll learn who you can ask to get any answer you need,” he remarked.

All three of these areas of responsibility were also covered in in-depth presentations, interactive conversations, and role-playing exercises designed to give participants real-world experience. Attendees learned how to process a resolution, prioritize tasks related to negotiations, and utilize the union’s successful approach to representing pilots in a disciplinary investigation.

Lockwood impressed upon the new leaders the importance of making connections during the conference. “You met a lot of people here who are all valuable resources for you. This is just the first step in building your network of support.”

Along with building that network, the pilots heard presentations from ALPA leaders and staff on a broad range of topics, including an introduction to the different departments in the Association and the support they provide; a detailed look at pilots’ dues money and where it goes; the duty of fair representation; tips for engaging with members; and ALPA’s advocacy on behalf of pilots in Canada, the U.S., and internationally.

Capt. Joe DePete, ALPA’s president, thanked the pilots for “taking on the mantle of leadership” and praised their commitment to the union. He highlighted recent Association achievements, including the effective navigation of the pandemic with ALPA pilot groups reaching more than 220 agreements with managements to protect and promote their pilots and the addition of 12 new pilot groups since 2019—a testament to the continuing strength of ALPA.

When asked about conference takeaways, Lockwood remarked, “Being an elected ALPA rep is a huge responsibility. I hope that attendees gain a better understanding of what their roles are and how they can best serve their pilots.” That proved true for Capt. Christopher Howard (Cargojet).

“I’ve only been in my new role with the Cargojet MEC a short time and this really helped fill in some blanks for me,” said Howard, Council 203 first officer rep. Cargojet is a single-council MEC, so Howard also serves the dual role of LEC and MEC vice chair.

“This week has enabled me to get a better grasp on the help afforded to me and who to get it from, with a face and a handshake to go along with it,” he observed. “I’m very glad ALPA held this event. I was able to connect with some amazing people.”

“When you take that seat you’re in,” DePete told attendees, “you never know what the day is going to bring or what challenges are going to come.” Whatever it is, though, these pilots will have both the training and the connections they need for success.