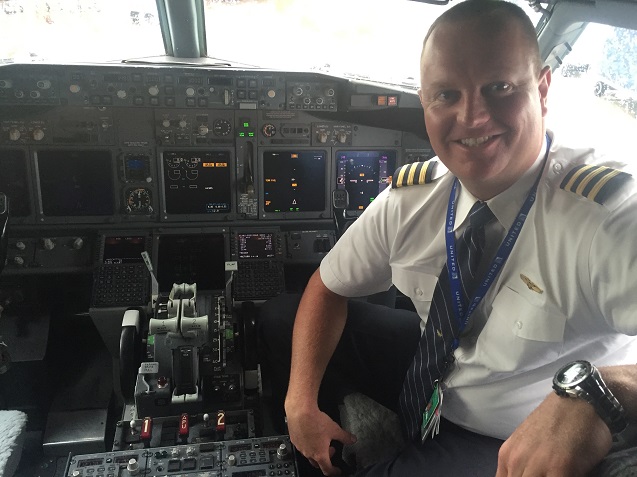 While he was in third grade, Justin Dean saw two F117s fly over his backyard; that’s the day he knew he wanted to be a pilot. The road was not short, however. “I didn’t have any family involved in aviation so I had a lot of research to do,” he admitted. But the dream stayed alive, even through 9/11. “Flying is my passion, and although 9/11 was a horrific day,” he said, “it did not dissuade me from wanting to follow my dream.”

That dream led him to Metropolitan State University in 2003, where he first started flight training. He earned all his certificates in college with the exception of the ATP license, thanks in no small part to the Capt. Jason Dahl Scholarship Fund.

“The Jason Dahl Scholarship helped me get my commercial license and part of my multi-engine license,” he explained. “Any extra money is a huge benefit in flight training. You want to stay proficient and that means flying often, but flying often means spending more money which I didn’t have a lot of! So the scholarship really helped give me a chance to build hours and ratings quicker.”

Dean had a couple corporate flying jobs during college, then after graduating started at Atlantic Southeast Airlines before moving on to Frontier. He was hired at United in January 2015. Shortly after joining United, he was asked to join the Board of Directors of the Dahl Fund as well—an offer he excitedly accepted.

As a past recipient, he said, “I have an understanding of the full circle of receiving and giving back to the Dahl Fund....I have a full understanding of what a huge difference this scholarship can make. I love being able to be part of a wonderful group of people and help young aviators achieve their dreams.”

“It is very humbling working with the very same people who helped me achieve my dream,” he finished, “and I look forward to the years ahead helping countless more young aviators achieve their dreams.”