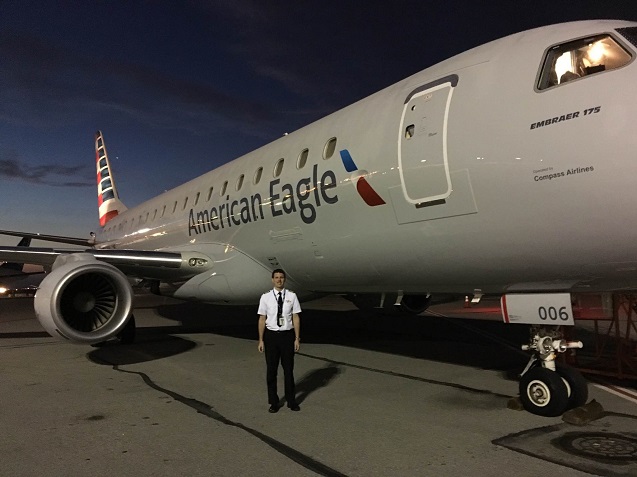 Unlike many pilots, Josh Mech didn’t grow up with his career choice set in stone. But that’s only because he thought there was no way it was even possible for him to fly. “While I was growing up, being a pilot was always an impossible dream for me,” he explained. “I was born with a severe to profound hearing loss and for the longest time I didn't believe that I had the hearing to be able to fly.” It was only after bilateral cochlear implant surgeries in 2006 that he began to consider the possibility.

But the love of flying was always there. “My family would take one big vacation a year that involved getting on an airplane and going somewhere far away and exciting,” he recalled. “For me, those vacations were great memories of my childhood and an airplane was always involved. I have very vivid memories of a flight attendant calling me up to the cockpit mid-flight to say hi to the pilots. I remember always getting a set of wings and being incredibly fascinated with airplanes and it always amazed me how something so big could fly.”

Becoming a pilot was still impossible in his mind on 9/11, so it didn't deter his dream, “but it really woke me up to the dangers of aviation and how much more is involved than just flying people from A to B and taking that for granted.”

His path to the cockpit was kick-started in high school after his surgeries. “My English teacher assigned a semester-long research paper on a future career,” he said. “At that point I still believed that I would be unable to fly with my hearing loss, but I had no idea what else I wanted to do. So I chose airline pilot and began researching the steps and qualifications that it took to work for the airlines.” That research led him to realize piloting was an attainable goal for him.

Soon he had a first-class medical license in his hands and began his flight training the following week. He received the LeRoy Homer Jr. Memorial Scholarship shortly after in 2009, which paid for him to complete his flight training. “I consider winning this scholarship to be what really gave me my start in aviation and on the airline career path,” he said.

Thanks to the scholarship, Mech finished up his private pilot certificate two days before graduating high school and started his advanced flight training while a student at Southern Illinois University. He graduated from college after just two and a half years, then worked for SeaPort Airlines and ExpressJet before being hired at Compass in October 2014.

He attributes that in part to receiving the scholarship. “That motivation to finish my training, get my degree, and get to the airlines,” he said, “without a doubt started with me winning the LeRoy Homer Scholarship.” And it hasn’t stopped.