My first officer was flying the approach into Phoenix Sky Harbor International Airport. We were 11 to 12 miles out from the airport—about 3,000 feet above ground level on a dogleg final. I saw a light on the ground a couple of miles to our left, about nine miles east of the airport, from what looked like an intersection near a shopping area. At first, I thought it was a spotlight from a car dealership, then I said, “Looks like some kind of laser light show.” As soon as I said those words, it happened.

The trip started uneventfully, but right after block out we received an ACARS message that our return flight that night had been canceled and we’d be bringing the plane back the next evening. Great, I thought, spending the night without an overnight bag. Guess I’ll be doing a little bit of shopping for toiletries. Soon, however, that would be the least of my worries.

When we checked in with Phoenix approach controllers, they said we’d be landing on Runway 26, the northernmost runway. The FedEx ramp is on the southwest corner of the airport, so it’s preferable to land on Runway 25L. We made that request, and they swapped us over. Just a minute or two later, I made my comment about the laser light show.

No sooner had those words rolled off my tongue, the light hit the cockpit and lit us up green. Lucky me, I was looking straight at it so I got the full blast, what seemed like two to three quick flashes right into my eyes. Fortunately my first officer didn’t take a direct hit since he was the pilot flying.

I didn’t get blinded, but the bright light immediately killed my night vision. It was just after dark, so my eyes were still adapting to the darkness, but I noticed the loss of my night vision right away. It was dark enough that before we were hit I was able to easily see the laser on the ground when I looked in that direction. When it moved toward our direction, we could tell it was pointed right at us—as if it was trying to track us. After it lit us up, the beam quickly went down parallel to the ground for a moment and was turned off. We didn’t see it again.

We were about three miles line of sight from the culprit with the laser. Yep, you can be hit from that far away with the “right” kind of laser. There’s no way the individual could even see the details of our plane, probably just a blinking light in the night sky. Tough to hit with a laser beam, but the culprit got us. And it was definitely no accident: big sky, little airplane. The individual was able to stay on us for a two count, too, and meant to do it.

We followed the old pilot axiom: aviate, navigate, communicate. My first officer was flying, and I was the pilot monitoring—and we were set up nicely for the approach to Runway 25L. I immediately advised approach control that we’d been lased. The information was passed along to the next controllers, and the tower and ground already knew when we checked in. In addition, I heard PIREPs going out to other aircraft flight crews to watch out for a laser as they approached the airport.

Once on the ground, air traffic controllers told us they were talking to law enforcement about our situation. I explained roughly where I thought the attack came from, and they passed that information along even though I was sure the culprit was long gone. Ground control kept us on the radio as we parked in case law enforcement needed to ask me anything else.

As we left the airplane, I called the FedEx Express duty officer to inform him what had happened. I was experiencing some mild discomfort so he insisted that I go to the ER and provided me with information about who to contact. He reminded me to fill out a security report through the FedEx Express system and requested that I keep him updated. He also copied everyone who needed to know. Before I even left for the ER, I had workers’ compensation forms in my e-mail.

I had my eyes examined at the ER and was told there didn’t appear to be any damage. The nurse-practitioner called it a “mild case of welder’s flash.” I got an Uber back to the hotel and completed my security report. My report went to about three dozen e-mail addresses, so it was seen by a lot of people.

I flew back to Memphis on Monday evening, then jumpseated home to North Carolina on Tuesday morning and then went to my local ophthalmologist. Luckily, the doctor was able to squeeze me in. She took a lot of pictures and applied dye to my eyes—I got the royal treatment for sure. She confirmed that there was no damage and backed up the welder’s flash diagnosis but told me to come back in three months just to be sure. I was finally able to breathe a sigh of relief. 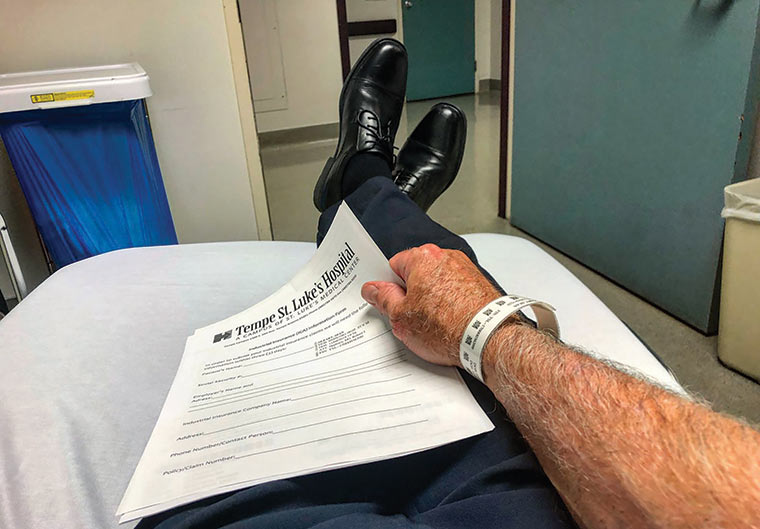 Capt. Sean O’Leary (FedEx Express) has his eyes examined in the ER and is diagnosed with a “mild case of welder’s ﬂash.”

I consider myself lucky. This was the third time that I’ve been lased, but the first two times I didn’t suffer a direct hit. This time I just happened to be looking at the wrong place at the wrong time. But I knew from the follow-ups from my airline that the situation was being addressed and that it was a concern.

The culprit wasn’t caught. The individual may still be engaged in the same acts of stupidity. If it can happen to me, it can happen to you. I encourage you to educate yourself, know what to do in the event of a laser attack, and know how to take care of yourself should you get lased.

Most aircraft laser illuminations occur during critical phases of fight (e.g., approach, landing, and takeoff) in the hours of darkness. The impact of a laser illumination is more pronounced when the dark-adapted human eye is significantly more sensitive to exposure to light sources. Laser illuminations can interfere with pilot vision, potentially impacting the safety of flight.

If you’re prepared mentally and procedurally to respond to a laser illumination, you’ll have the tools to protect yourself and your fellow crewmembers and safely and efficiently manage the response to the event.

To review specific steps to take in the event of a laser attack, log on to ALPA’s website and click "Laser Reporting" under the Pilot Resources tab. Report any laser strike to the FAA or to Transport Canada.

ALPA continues to work with the U.S. and Canadian governments on this serious issue. The “Protecting Aircraft from Lasers” campaign of 2014, in partnership with the FAA and the FBI, reached out to the general public about the dangers of shining a laser at an aircraft and to remind them that knowingly doing so is a federal felony that carries a punishment of up to five years in prison and a $250,000 fine.

The following year, ALPA partnered with Transport Canada on its “Not a Bright Idea” campaign to combat laser strikes and continues to work with the agency on this important issue. Aiming a laser at an aircraft in Canada is a federal offense as well, with violators facing up to $100,000 in fines and five years in prison. The government, with support from ALPA, refocused on the issue last year, and today many handheld lasers are prohibited in Canada in certain areas and close to airports.

This article was originally published in the April 2019 issue of Air Line Pilot.