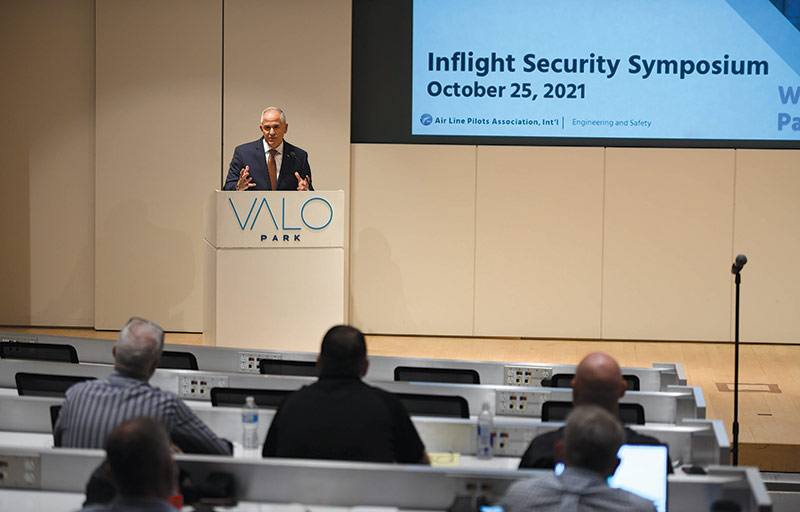 “The last line of defense.” That’s what Capt. Joe DePete, ALPA’s president, called the airline pilots who volunteer as federal flight deck officers (FFDO) during the Association’s inaugural In-Flight Security Symposium. “These ALPA pilots demonstrate pure volunteerism, pure principled commitment,” said DePete. “They’re prepared to stand in the way of those who possibly intend to inflict harm and destruction on a massive scale.”

Held October 25 at the Association’s McLean, Va., offices, more than 30 ALPA pilots and staff along with pilots from the Allied Pilots Association, the Independent Pilots Association, and the Southwest Airlines Pilots Association gathered to discuss the importance of the FFDO program, which emerged in the wake of 9/11 as a critical aviation security enhancement, and the continuing need for collaboration.

Capt. Wolfgang Koch (Delta), ALPA’s Aviation Security chair, opened the symposium, reminding attendees, “While today was going to be the first day of the 66th Air Safety Forum, the postponement of that event provides us the opportunity to focus exclusively on the current and potential security threats to our industry.”

He echoed DePete’s sentiment that those gathered for the symposium represented a commitment to collaboration and keeping commercial air travel the safest form of transportation. Koch noted that the security programs ALPA advocates for are more important today than ever, especially in light of the spike in unruly passenger events. 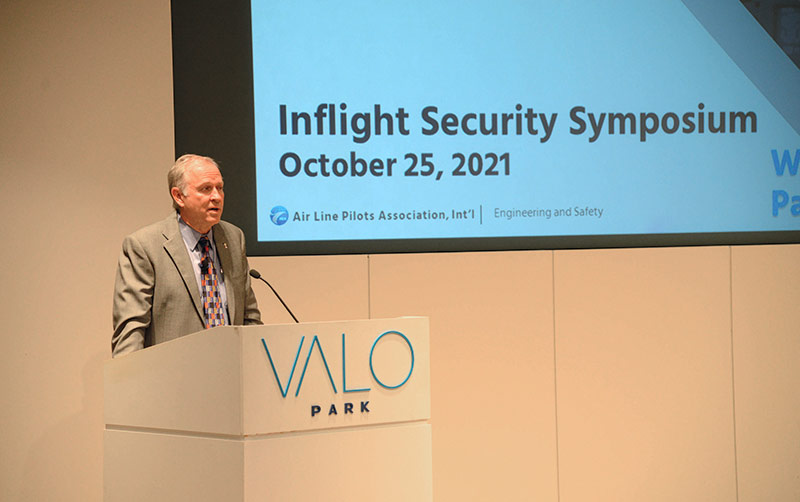 Hosting the symposium reinforced the union’s unyielding support and commitment to the FFDO program and the airline pilots who volunteer, DePete commented. Highlighting how crucial the FFDO program is to aviation security, the gathering promoted discussions among stakeholders that brought attention to vital aspects of the program and provided training that continues to support the lifesaving efforts of FFDOs.

While conversing with symposium participants, DePete acknowledged that the FFDO program is continuously under attack by those who want to see it fail, noting that the gathering was critical to highlight the FFDO volunteers, the successes of the program, and the need for continued program funding by Congress and the Transportation Security Administration (TSA).

He observed, “The small per-mission cost for the program yields a near-incalculable return on investment in terms of the safety and security of our air transportation system. This should be an easy sell—and yet, every year, the program is at risk, and ALPA advocates for and justifies every dollar. I ask, ‘What’s the cost of not having this layer of protection?’ The answer is something no one should want to see.”

The symposium also served as an opportunity for ALPA’s president to recognize two of the program’s most stalwart supporters. “Capt. Koch and Capt. Darrin Dorn [Alaska, ALPA’s Aviation Security vice chair], supported by the full weight of ALPA, have both been tireless advocates of the FFDO program and all of ALPA’s security efforts,” DePete said. “Without their time and energy, the ‘final line of defense’ could have been a distant memory—until another tragic attack. I look forward to seeing this annual event continue the conversations on how to better serve these valuable security officers and express our profession’s gratitude to those who stand on that line and say, ‘Never again.’”

Guest speakers at the symposium included Dr. Bruce Hoffman, a professor at Georgetown University who’s spent more than 45 years studying terrorism. “The United States is preoccupied and distracted by myriad policy challenges, including a competition or rivalry to maintain power on the international scene. At the same time, we’re enduring cyberattacks and serial disinformation and discussing climate change and the environment, all while experiencing the COVID pandemic and the resulting disruption to our economy.

“In addition, the terrorist threats the U.S. faces are now both domestic and foreign,” Hoffman added, “and are coming from multiple terrorist movements—and their various global franchises, branches, and affiliates. These serious threats come from traditional, hierarchically organized terrorist groups as well as from lone actors or small cells, which are more difficult to identify, track, and anticipate. And of particular note, the terrorist threat to commercial aviation has been resurrected.”

Kyle Klein, staff director of the House Homeland Security Committee, facilitated a discussion of the FFDO program and how Congress and the TSA work to keep the program viable.

“When I think about the FFDO program, it’s obviously never been more clearly critical or important. By October 3 of this year, the TSA had intercepted almost 5,000 firearms—the most ever in a single year for the agency. So that’s just one way of underscoring how truly critical you are to the safety of the homeland.

“What’s interesting,” Klein noted, “is that FFDOs somehow manage to be both at the very front lines and also the very last line of defense in the security of the aviation system. We on Capitol Hill are really grateful for that and really take notice, which is why we support the FFDO program.” 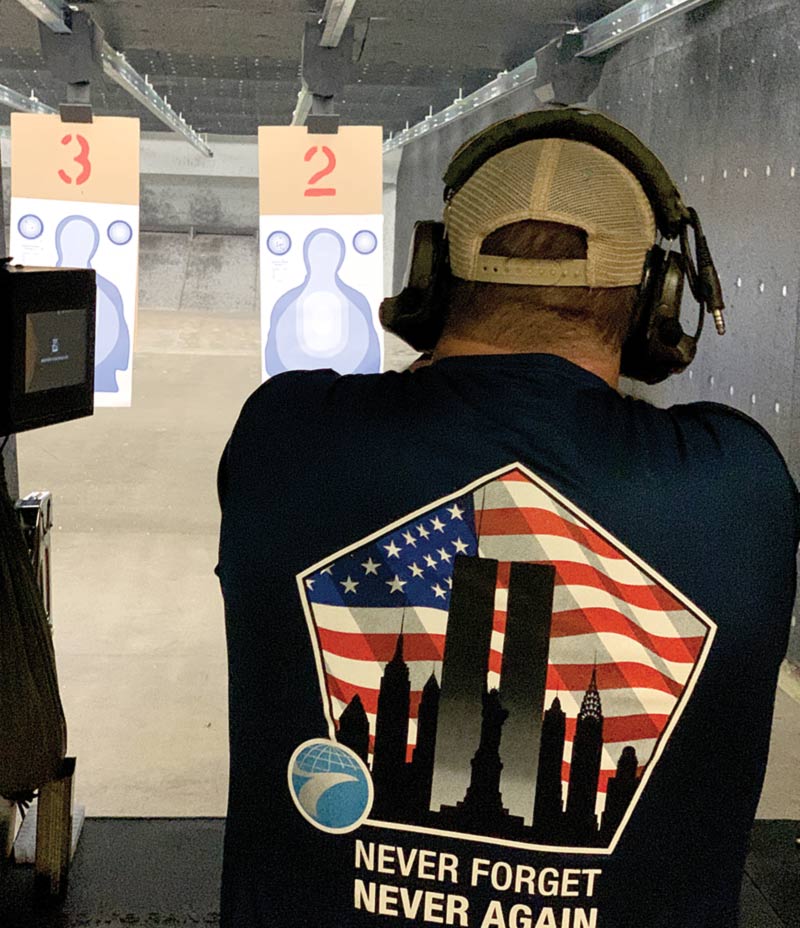 Pilots attending the symposium practice their skills at an indoor firing range.

Jeff Fuller, a supervisory special agent with the FBI’s Civil Aviation Security Program, provided a briefing on current threats to aviation. “Unruly passengers have definitely been increasing in numbers, but we often need to remind people that, on an airplane, the FBI isn’t the ‘mask police.’ So if you have someone who just won’t wear a mask, call the local police and let the FAA fine them. We’re going to become involved if it gets violent or constitutes interference.”

Jessica Tipton, an FBI intelligence analyst, provided an “insider” security threat assessment. “We’re seeing many potential threats adjusting tactics and actively seeking out airport workers who have access through security or barriers. This could be anyone: screeners, vendors, ramp workers, even IT personnel and mechanics.“

Daniel Kuhn, deputy branch manager of the TSA’s Federal Air Marshal Service, provided an FFDO update from the TSA perspective. He highlighted the recent addition of a recurrent training program (RTP) facility in Atlanta, Ga., that’s operational on a part-time basis to assist in keeping FFDOs ready to serve and addressed the prospective for additional facilities for initial and recurrent training in the near future.

“I consider us a team, striving for one goal and purpose,” Kuhn stated, “which is preventing another 9/11 from happening or any terrorist act from occurring onboard commercial aircraft.”

He also discussed the effort to establish stand-alone RTP facilities in Atlanta, Ga.,—available to FFDOs on a full-time basis—as well as in Ontario, Calif., and detailed the long-awaited senior FFDO program and what’s required of FFDOs to qualify for the program’s additional training opportunities when it’s funded.

The symposium concluded with off-site training hosted by DePete and federal air marshals during which attendees received instruction on firearm use in low-light conditions and use of medical procedures for casualty care.