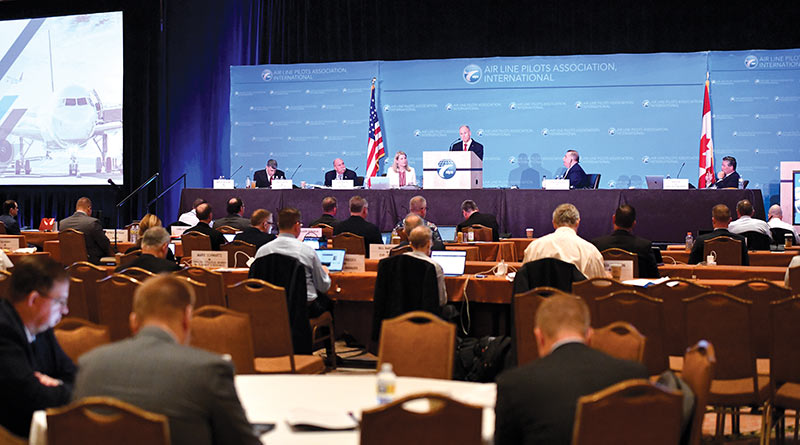 ALPA’s national officers, executive vice presidents, and master executive council (MEC) chairs convened in Washington, D.C., on September 11–12 for the 131st regular meeting of the Association’s Executive Board. This governing body assembled to receive an update on the Board of Directors (BOD) meeting, scheduled for October 17–20, and to conduct the business of the union.

During his opening remarks, Capt. Joe DePete, ALPA’s president, announced that while the planned dates for the BOD meeting would remain the same, a then-unresolved labor dispute between management and the union on the hotel property compelled ALPA Executive Council to change the location. “We will not do anything to undermine a fellow union as they exercise their rights to collectively bargain,” DePete said.

The Executive Board meeting featured reports from ALPA’s four national officers, beginning with DePete, who noted, “The importance of a strong supply of qualified, experienced, and well-trained airline pilots has never been more apparent than today, as passengers take to the skies in the return to flying that we predicted would happen.”

DePete addressed the ongoing airline industry recovery, operational disruptions due in large part to airline managements’ shortsighted planning, new pilot groups that have joined the Association, and the remarkable gains made in recent collective bargaining efforts, particularly at the fee-for-departure level. “We’ve endured so much together—a government shutdown, the grounding of the 737 MAX, and a global pandemic—and yet these trials have only made this union stronger,” he added.

Capt. Bob Fox, ALPA’s first vice president, reported, “In today’s global environment, especially with the operational issues the entire aviation industry has faced as we recover from the pandemic, it’s more important than ever that we confront the threats affecting our pilot community in the United States, Canada, and globally.” In particular, Fox acknowledged the Association’s work to raise aviation safety standards, combat unfair labor practices, and stop the conduct of human trafficking on airliners.

“I’m glad we’re able to conduct this meeting and the upcoming BOD in person,” commented Capt. Bill Couette, ALPA’s vice president–administration/secretary. “Videoconferences have their purpose, but in-person meetings help us build consensus and work together.” Couette reviewed the Association’s policies and procedures governing business conducted at the BOD and the recent activities of the Professional Development Group and the Information Technology Advisory Committee.

The meeting also included featured keynote speakers. Liz Shuler, president of the AFL-CIO, highlighted the recent surge in trade unionism popularity. According to recent polling, “Seventy-one percent of the public support unions,” she said, adding that members of the labor community need to be creative, share best practices, and learn from each other. “It’s all about growing our ranks,” Shuler added.

Capt. Humberto Gual, secretary general of the Asociación Sindical de Pilotos Aviadores de México (ASPA), announced a reaffirmation of the alliance between ASPA and ALPA. Gual discussed the impact of the pandemic on the global airline industry and the piloting profession, acknowledging the benefits of working together and recognizing that “in crisis, we all need each other.”

During the meeting, the Executive Board acted on 12 agenda items, including receiving ALPA’s continuing committees’ reports to the BOD. In other business, F/O Justin Dahan (FedEx Express), who chairs ALPA’s Education Committee, discussed the many ways his committee is working to make the airline piloting profession more accessible to future generations. In a special ceremony, DePete recognized Capt. Mike Arcamuzi (FedEx Express), a longtime ALPA volunteer who’s supported numerous national and MEC committees and was retiring at the end of September after a long career as an airline pilot.

Arcamuzi, the father of three ALPA pilots, shared a moving exchange he had with his own father, a former United Airlines captain. When he was a child, Arcamuzi asked his dad about the significance of his ALPA lapel pin. His father responded, “See these little wings; they make the big wings worthwhile.” 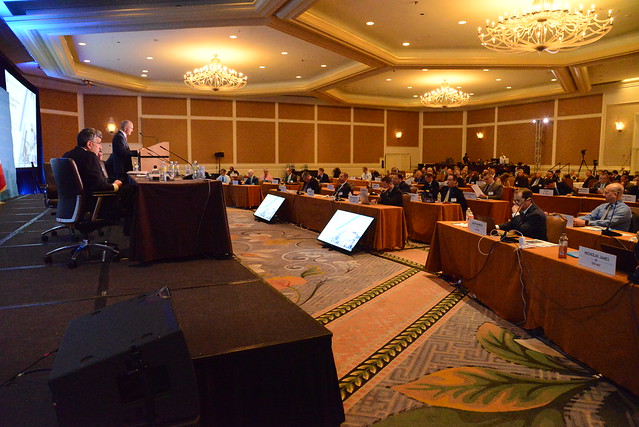