Executive Board Convenes in Person to Conduct Union Business 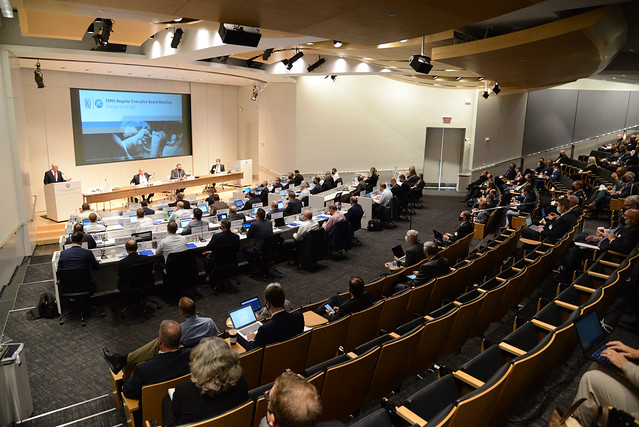 Master executive council (MEC) chairs, executive vice presidents, and national officers assembled at the Association’s McLean, Va., offices September 20–21 for an in-person meeting of ALPA’s Executive Board to conduct union business and policy deliberations and review the status of the Association’s strategic plan. This biannual gathering included a 9/11 tribute video; an update from Dr. Quay Snyder, ALPA’s aeromedical advisor; a demonstration of the Flight Finder feature on ALPA’s mobile app; the presentation of this year’s J.J. O’Donnell Trophy; and recognition of a longtime ALPA volunteer who recently retired. The meeting began with national officer reports.

“This board has guided our union through the pandemic and risen to an unprecedented challenge,” said Capt. Joe DePete, ALPA’s president, in his report to attendees. He acknowledged, “The once-in-a-century public-health crisis called for strong, steady leadership—and our union delivered. Each of you delivered.” Referencing the three installations of the payroll support program in the United States, he pointed out that ALPA helped ensure funds were directed to pilots and other airline workers and not to executive compensation and stock buybacks, as has been the case following previous crises that merited government intervention.

Reviewing the Association’s recent actions, DePete noted, “We also looked to the contracts and legal agreements that lie at the heart of capitalism as proven tools that protect both labor and management in good times and bad. We negotiated a historic number of agreements with airline management teams in the United States and Canada that protect the health, rights, and careers of our members,” he said.

“During the past 90 years, ALPA leaders have met tough challenges. Really tough challenges,” DePete acknowledged. “We prevailed then—and we’ll do so now by rolling up our sleeves, pulling from the extraordinary talent we have in our ranks, and marshaling our collective resources to ensure that, as this union’s leaders, we obtain the best possible outcome for our pilots.”

Capt. Bob Fox, ALPA’s first vice president and national safety coordinator, reviewed the important role the union’s Air Safety Organization (ASO) continues to play in ensuring pilot attention remains firmly focused on aviation safety and security. “As the recovery from the pandemic continues, and the pace of flight operations accelerates, our pilots must maintain their alertness,” he said. “In mid-July, I sent a message to our members reminding them that we must redouble our focus on the most important thing—the safety and security of our flights—no matter the internal and external stresses and distractions.”

Fox also discussed the impact that pilot early retirements and the large number of members who’ll turn 65 in the next few years could have on ALPA-PAC donations. Many of these members have been staunch supporters of the PAC, and it’s imperative, he noted, that their junior counterparts participate so that the Association can continue to have a strong presence on Capitol Hill.

Despite the pandemic’s impact on aviation, ALPA has been able to grow its number of pilot groups. Capt. Bill Couette, ALPA’s vice president–administration/secretary, welcomed the pilots of the Association’s two newest carriers—Cargojet and Flair Airlines. He observed, “With the inclusion of Amerijet International, Morningstar Air Express, PAL Aerospace, and Western Global, ALPA has added six new pilot groups since April 2020.” He also acknowledged the return of ExpressJet, one year after its closure, noting that the carrier is “now called Aha!, which stands for air-hotel-adventure.”

Couette asserted, “Airline pilots are in demand. The U.S. Bureau of Labor Statistics reports that the average growth rate for all occupations is 8 percent. The current growth rate for pilots is 13 percent. The agency predicts an average of about 14,500 openings for airline pilots each year through 2030.” He commented that with this kind of growth and demand, “This is the perfect chance to encourage young people to consider an airline career,” pointing to ALPA’s objective to attract the next generation of airline pilots.

“As we first entered into the pandemic some 20 months ago, I honestly wondered when I’d be able to stand before you and tell you that we were in good financial shape,” said Capt. Joseph Genovese, ALPA’s vice president–finance/treasurer. “The future certainly looked bleak as our industry essentially shut down. But we set our course, rowed the boat together in the same direction, and we got to where we are today.”

Genovese spent a significant portion of his report discussing the work of ALPA’s Structure, Services, and Financial Review Committee—in particular, its review of the Association’s Major Contingency Fund (MCF) and how this resource can be best applied to serve members. Prior to the Executive Board meeting, ALPA’s Executive Council met and opted to extend the purpose for this account to include the added expenses of contract implementation and grievances for “when the company suddenly gets amnesia on the agreed details on a deal they just negotiated,” Genovese remarked.

As part of his presentation, Snyder observed that AMAS will begin providing aeromedical guidance to ALPA’s Canadian members starting in January 2022. As part of this transition, his organization is currently coordinating with Transport Canada to address how AMAS will handle case submissions and appeals procedures and how it can ensure timely updates on policy and regulatory changes.

During the meeting, DePete presented the J.J. O’Donnell Trophy for Excellence in Political Action to the pilots of Frontier Airlines for their remarkable efforts to increase ALPA-PAC donor participation. Capt. Elliott Isaacs (Frontier), his pilot group’s MEC vice chair, graciously accepted the award, noting that the MEC’s Membership Committee volunteers have made a concerted effort to promote the PAC to new pilots while still in training.

The board deliberated on six resolutions, including revisions to the union’s policies on the MCF and the Operating Contingency Fund. The Executive Board passed an amendment to the Association’s Constitution and By-Laws outlining changes to the Appeal Board’s jurisdiction as it relates to ALPA elections and election challenges. Other actions involved a policy update addressing ALPA and university accreditation and an Administrative Manual amendment to ASO fire-suppression policy.

Also during the meeting, board delegates went into executive session to discuss COVID-19-related concerns at their properties. In addition, Couette provided a strategic plan update, observing that the MEC chairs should have received a mid-term progress report. Members can view ALPA’s strategic plan at alpa.org/strategicplan.

ALPA’s Executive Board is scheduled to reconvene for its 130th regular meeting on May 18, 2022.