The ALPA mobile app for smartphones and tablets has been a game changer for the Association since its introduction a decade ago. This robust communications tool has changed the way the union is able to interact with its more than 61,000 members who, at any given moment, could be anywhere in the world. 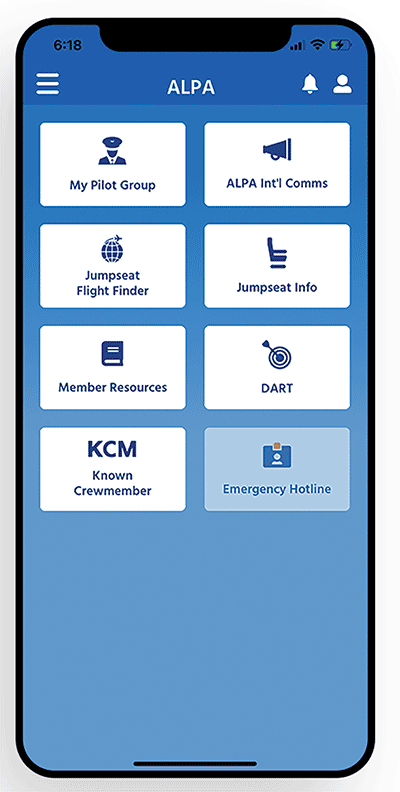 The current version of the ALPA app, launched earlier this year, continues to be enhanced to provide a greater range of data and tools, and this increased efficiency hasn’t gone unnoticed. Since its creation, the app has been accessed by more than 38,000 unique users—over half the Association’s membership.

“With the prevalence of mobile devices, the ALPA app ensures that much of what our members need to know is available at their fingertips—where they work, when they need it,” said Capt. Joe DePete, ALPA’s president. “The app provides a host of resources and information to educate and engage our members and provide them with channels for questions and feedback. In particular, the introduction of Flight Finder was a watershed moment for the Association.”

Arguably the most popular of the app’s features, the Flight Finder jumpseat search tool was introduced in January 2021. A priority initiative for DePete, this innovative search engine—developed by ALPA’s Air Safety Organization (ASO) Aviation Jumpseat Group and ALPA’s IT and Communications Departments—provides pilots with the capability to determine the most efficient flight routes to reach a destination, even if it requires multiple connections and airlines (including passenger and most all-cargo carriers). To date, this specialized module has been accessed by more than 14,000 pilots a month for a combined 900,000 flight searches.

“Flight Finder has literally streamlined the jumpseat planning process for pilots,” DePete commented. “Nearly two thirds of our members are commuters, and no other jumpseating tool provides this amount of flight information and time-critical details. Flight Finder is just one more example of how this union is committed to making our members’ jobs more manageable and improving their quality of life.”

In May, ALPA updated Flight Finder to enable users to receive notifications of status changes on specific routings, including delays, cancellations, and gate changes. For the month of August, the popularity of this unique feature peaked with a total of 118,533 individual searches, providing further evidence of its tangible value and importance to ALPA members.

“Combining comprehensive cargo and passenger flight data was the key, since this feature isn’t available on other jumpseat apps,” said Capt. Rich Odbert (FedEx Express), the ASO Aviation Jumpseat chair. “We gathered flight data from a broad range of sources and ensured that the app feature could refresh faster to offer real-time information. In addition, feedback from pilot focus groups helped us customize Flight Finder to better address the needs of our members.”

F/O Ben Wallander (Delta), the ASO Aviation Jumpseat communications chair, was particularly instrumental in combining aspects of more than a dozen existing jumpseat tools into one extraordinary device. He subsequently worked with ALPA leaders and the IT and Communications Departments to develop a prototype, and both Wallander and Odbert gave a demonstration of Flight Finder at ALPA’s September 2021 Executive Board meeting.

More recently, the Association has extended access to Flight Finder to select non-ALPA pilot groups. As part of a reciprocal arrangement, the groups must provide regular access to their flight schedules for inclusion in the flight-search database. The pilots of ABX Air were the first to take advantage of this arrangement, and, to date, nearly 80 ABX pilots have logged on and performed Flight Finder searches. Agreements like this provide ALPA pilots access to more flight options when planning their commutes.

In addition to Flight Finder, the ALPA app provides other jumpseat content including how to list for the flight deck jumpseat on other carriers. Pilots can access passwords, important phone numbers, carrier-specific policies and agreements, and other details.

The latest iteration of the ALPA app sports a redesigned user interface with a broad range of capabilities driven largely by member feedback. The most frequently used features are now front and center, making them easier to access. These include the Data Action Report (DART) program, which allows members to direct questions to the Association’s subject-matter experts for a guaranteed timely response on the app home screen. Pilots can receive breaking news, peruse Air Line Pilot, watch Association videos, and access their membership account details. Other app features include pilot leadership and committee contacts and hotel information as well as document, event, and update functionality for both pilot group master executive councils (MECs) and local executive councils.

In addition, members can retrieve important safety and security content and U.S. airport locations for Known Crewmember® security checkpoints. The union’s International Directory and the “Orange Card,” which lists ALPA’s Accident/Serious Incident Hotline number, are now just one click away, making this critical contact information even easier to access in the event of a serious accident or incident.

The ALPA app also makes it even simpler for members to receive urgent information from the Association with the option to enable push notifications for important changes, news, and events.

In his Sept. 1, 2010, report to the Association’s Executive Board, Capt. Bill Couette, ALPA’s vice president–administration/secretary, announced the planned introduction of the original ALPA app.

“For those who may have already heard the rumors, we’re in the process of developing an iPhone app that will give our members immediate access to information they need to know from ALPA and their individual MECs,” he said. Couette chairs ALPA’s Information Technology Advisory Committee (ITAC), which has overseen the development of the app since its unveiling.

“We plan to debut the ALPA app next month at the [2010 Board of Directors] meeting, and that’s just the beginning,” he continued. “Phase 2 of the app will include a video portal and a searchable contract. We’re hoping to include jumpseat information during this phase as well. We’ll keep you updated on the progress.”

The ALPA app officially launched in April 2011 and included news and information from the Association’s website and updates from the pilot’s specific MEC. It was limited to iPhone users but was promptly updated to provide access for Android and BlackBerry users.

Basic jumpseat information was soon included with policies for 80-plus carriers along with Known Crewmember data. New features were continuously added and updated, including a built-in bar code that allowed pilots to use their smartphones to scan in their attendance at various ALPA meetings. In addition, the platform was updated, enabling the Association to publish information in one location and have it automatically posted to website and social media pages.

With the most recent ALPA administration taking office in 2019, DePete placed a new emphasis on the app and the development of additional features including Flight Finder. In short order, the app could be used by ALPA leaders to access information from AIRO, the Association’s member database, and line pilots could access DART and Pilot Peer Support. The Canadian FTDT calculator and Flight Finder were added the following year.

Couette recently observed, “ITAC will continue to look for new ways to expand mobile app functionality and convenience. As part of ALPA’s strategic plan, the union strives to ‘provide agile, innovative, and effective communications tools and methods.’ We’ll continue to develop and deploy new app features to better serve our members and build on this goal.”

If you haven’t already done so, download the ALPA mobile app and learn firsthand just how much you can access with this powerful tool. Once downloaded, log in with your ALPA credentials to access all the app features, and make sure you’re running the most recent version of the app to access its latest capabilities.