Leading the Charge on the Safe Integration of Commercial Space Operations 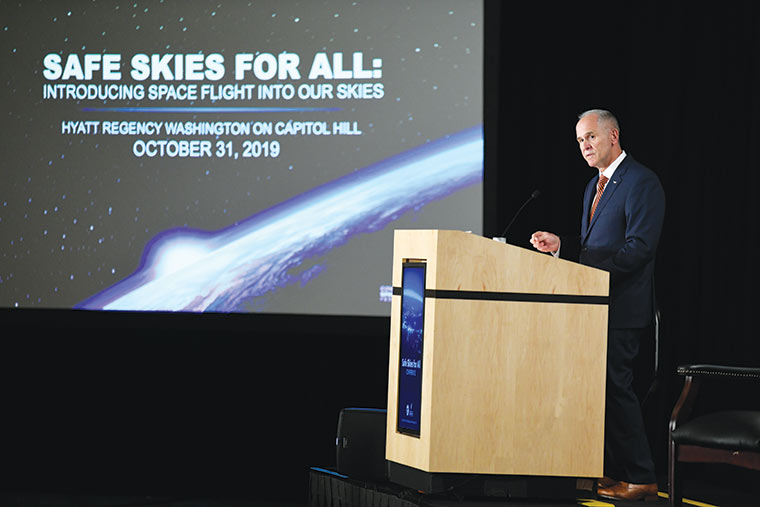 Aviation and space leaders gathered in Washington, D.C., and via live stream on October 31 for ALPA’s first-ever joint commercial space conference with the Commercial Spaceflight Federation (CSF) demonstrating the union’s leadership and never-ending pursuit to keep the national airspace safe and secure.

Capt. Joe DePete, ALPA’s president, welcomed attendees with this notable reminder: “Fifty years ago, the Apollo 11 spacecraft transited the U.S national airspace as it soared into Earth’s orbit. Today, when spacecraft begin their trek skyward, they still transit the national airspace—and it’s an extraordinarily safe first step in the journey beyond Earth. It’s important to remember why the national airspace is so safe: we made it that way!”

Eric Stallmer, CSF president, remarked, “It’s been an incredible year for space operations—and it also represents incredible opportunities to streamline regulations and make space more accessible and safer. While the U.S. government’s focus on protecting the public comes first, it’s also encouraging the innovation necessary to achieve flight safety that’s being replicated in many other countries through this leadership.”

Keynote speaker Sen. Ted Cruz (R-TX), chair of the U.S. Senate Subcommittee on Aviation and Space, observed, “As commercial entities have developed new capabilities in and for space, many of which were inconceivable just a few short years ago, and the government has continued to leverage the commercial sector for data, launch services, exploration technology, and more, it has become increasingly important that the United States create the kind of flexible, statutory, and regulatory framework that will help maintain American dominance in space…. I believe we can have a safe and efficient commercial spaceflight industry and also a safe and efficient civil aviation industry. I believe the two industries can and should work together in tandem.”

Keynote speaker Dr. Scott Pace, executive secretary for the National Space Council, discussed the importance of the aviation and space industries jointly identifying needed improvements for the future of the air traffic control system. “This third reincarnation of the National Space Council deals with a different set of issues than previous ones. The world we’re in today sees the globalization or democratization of space, with more countries and companies capable of operating there. In the past, when I wanted to see innovative ideas, I’d go out to California and the Lawrence Livermore National Lab. Nowadays, I don’t have to look very far—I just have to open a copy of Space News and I can find tons of innovative ideas.”

Pace continued, “We have a much more robust commercial industry both domestically and globally than we ever did before, and so our challenge today is how do we manage that reality of a much more crowded environment and a much more diverse environment.”

In a panel discussion titled “Setting the Stage—the Need to Integrate Space Operations,” Capt. Steve Jangelis (Delta), the ASO’s Aviation Safety chair, pointed out, “We always say the ‘Big Sky theory’ is going to take place and ‘don’t worry, it’ll all separate itself out’ but that just isn’t worth the risks. So it’s critical that our groups get together, learn each other’s needs, and exchange information so that we can collaborate more effectively.”

Capt. Brian Teske (Delta), ALPA’s subject-matter expert on space operations, noted, “Besides the excitement of the technology and the advances, there are two concerns for me: a micro and a macro. As an airline pilot, I need to have accurate, real-time information—be it NOTAMs or other communications. And from a macro standpoint, the pilots of ALPA need to be a stakeholder and involved in building the foundation of how the future airspace will operate.”

Wayne Monteith, FAA associate administrator of commercial space transportation, stated, “Both of these industries, commercial aviation and space, must be successful—not just from a national economic standpoint but a national security standpoint. So we have to figure our way through this dilemma of shared airspace—a finite national airspace system—as today we primarily segregate commercial space traffic from other operations. We need to move to the point where we can integrate.

“The way for us to get through this is technology,” Monteith stated. “When the SpaceX Falcon Heavy first launched, I was running the Eastern Range [the missile and rocket launch range, covering more than 10,000 miles from the Florida mainland through the South Atlantic and into the Indian Ocean]. The risk and danger from that mission was over in about eight and a half minutes, yet it was at least three times that long before the airspace was reopened. That’s because we use ‘sneaker net’—moving data via floppy disks, voice lines, and handshake—not machine-to-machine interfaces that are able to get this data moved quickly.”

During the panel discussion on “Accommodation of Commercial Space—Streamlining Space Launches Through Regulation and Policy,” F/O Stephen Browning (United) provided the pilot’s perspective: “From my little office at 35,000 feet, what scares me is that we’re talking about shrinking these air spaces down a little bit, which might be okay in the nominal situation…. However, the off-nominal is my concern, as neither I nor any other pilot have received training on how to avoid space debris from an exploding rocket ship.”

In a panel titled “Integration of Commercial Space in NAS Operations—The Future of Space Flight,” Paul Rinaldi, president of the National Air Traffic Controllers Association (NATCA), focused on the need for the airspace system to get technological upgrades. “It’s really hard to do long-term planning and sustain a very safe and efficient aviation system. Almost all of the resources the FAA has go into running the day-to-day. Datacomm is a perfect example. We were in the process of doing robust testing that was complicated by a 35-day government shutdown. We identified that some of the aircraft in the system…don’t interface properly—so we’re working through all these bugs. And it’s taken time because the backbone of the system is so antiquated. It takes forever to adapt to modern-day technology as it is evolving so rapidly. Our ATC structure just can’t adapt rapidly enough.

“We’re focused solely on running today’s operation as it’s expanding,” Rinaldi continued. “Yes, we’re trying to modernize, but we’re doing it very slowly as it’s a risk-averse system. You don’t want to put too much change into a system. But what worked 35 years ago isn’t working today, and other countries are positioned to surpass us in space because of these outdated systems and technologies.”

At the conclusion of the conference, DePete and Stallmer issued a joint statement: “ALPA and CSF vow to continue to work together to improve the commercial aviation and space community’s understanding of each other’s technologies, operations, and constraints; to explore potential solutions to conflicting demands for airspace; and to advocate for optimized use of airspace around launch and reentry activities. We agree that the status quo cannot continue and the private sector must help the FAA innovate to minimize any negative impacts of the growing commercial aviation and space industries. As leaders of our respective industries, ALPA and CSF have taken cooperative action to solve these problems. We’re working with colleagues and other key stakeholders to improve how we operate today, as well as advocating for investments in new air traffic control tools that will better optimize airspace while preserving safety as we enjoy future growth in both air and space transportation.”

In conjunction with the “Safe Skies for All: Introducing Space Flight into Our Skies” conference, ALPA published an updated white paper, “Safe Integration of Commercial Space Operations into the U.S. National Airspace System and Beyond,” that takes a deeper look into the operational integration of commercial space into the national airspace system (NAS) and beyond, particularly in the area of oceanic air traffic management.

In ALPA’s previous 2018 paper, “Addressing the Challenges to Aviation from Evolving Space Transportation,” the Association highlighted the numerous challenges that the tremendous growth in commercial space operations will present to the nation, including space operator approval, spaceport licensing, regulations for spacecraft crew and participants, spacecraft design standards, and other critical areas. ALPA believes that the number of commercial space launches and recoveries will rapidly escalate in the next 10 years, and that the United States will lead by example in successful commercial space operations that are safely integrated with the mature commercial aviation industry. This growth is taking place much faster than anticipated.

As a result of these launches, as well as recovery operations, the Association points out that an undue burden has been placed on critical and limited public resources—namely, the NAS, air traffic management, ground infrastructure, and airport services. For example, current space launches require closing large volumes of airspace, which not only places large administrative burdens on commercial space operators but also causes significant disruption to aviation.

The updated white paper highlights the opportunity that exists today for the aviation and commercial space industries to collaborate on and benefit from a joint vision for the future.

The document addresses the evolution from today’s manual, segregated operations to a future that’s highly integrated—not just with airspace sharing, but also in information sharing, situational awareness, collaborative decision-making, and operational procedures. ALPA believes that integrating commercial space operations and commercial aviation operations into the NAS is an urgent need that requires careful planning and commitment from many different parts of the industry. By working together, both the aviation and space communities have the opportunity to benefit from investments in our national airspace infrastructure.

The Association identifies numerous opportunities in the paper that are a “win-win” for stakeholders in both the aviation and space industries. These include investments in communications, navigation, and surveillance of oceanic airspace; improvements to air traffic control automation; and the development of new procedures and separation standards. Along with the creation of spacecraft design-assurance standards and operator and crew certification, ALPA sees a long-term future where space operators can “file and fly” like any other operator in the NAS, with separation standards and a harmonized safety approach.

For both commercial aviation and space operations, future growth and success are dependent upon safe and efficient access to the same shared public resource—the NAS. Since commercial airline pilots have the unique advantage of being daily users of the NAS, ALPA has been a leading voice for the safe integration of space transportation operations into commercial aviation infrastructure and operations.

The Association and the aviation industry recognize the responsibility to share the safety lessons learned so that others don’t repeat them. ALPA is dedicated to facilitating the safe integration of new and expanding users of the NAS. This commitment applies to all users, including unmanned aircraft systems or drones, hyper- and supersonic flight, and, of course, commercial space. By working together, the aviation and commercial space industries have an opportunity to use a data-driven, risk-predictive approach to safely integrating commercial spaceflight into the airspace.