Board of Directors Convenes Virtually, Plans for Association’s Future 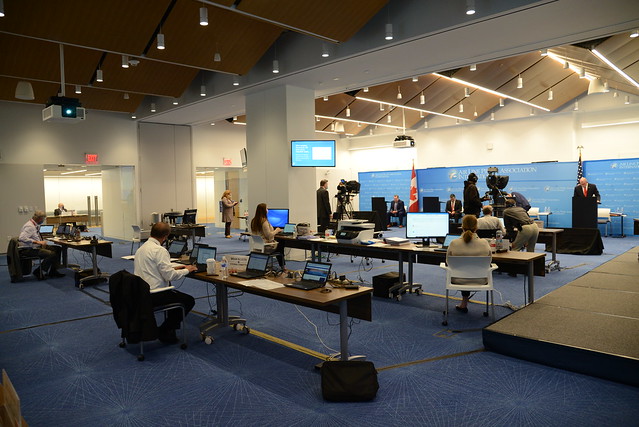 Exhibiting a new level of flexibility to address the social distancing measures brought on by the COVID-19 pandemic, ALPA’s Board of Directors (BOD) met for the very first time via videoconference. The Association’s local council status representatives joined with members of the union’s Executive Council and Executive Board on October 19–21 not by assembling in a large conference facility but by logging onto their laptops and other personal electronic devices.

The meeting was broadcast live from the union’s McLean, Va., offices where the 48th regular meeting of the Association’s highest governing body opened with the customary reports from ALPA’s four national officers.

“From the pandemic’s onset, we knew that overcoming its consequences would require the effort not of a few but of all our members,” said Capt. Joe DePete, ALPA’s president, in his opening remarks. He spoke at length about ALPA’s fight to preserve jobs, prevent furloughs and other work displacements, and stabilize the U.S. and Canadian economies during the current global health crisis. He also talked about the CARES Act payroll support program and stressed that it wasn’t too late to extend the legislation’s original deadline of September 30 and give the much-beleaguered airline industry additional time to recover.

“Our union has issued a similar call to the Canadian government to provide economic assistance directly to the aviation industry—and those of you in Canada have rallied in strong support,” DePete continued. “Led by ALPA Canada President Tim Perry, we’ve urged the Canadian government to extend the Canada Emergency Wage Subsidy and create targeted relief for the Canadian airline industry and its workers,” he added. “Throughout this pandemic, ALPA members have left no doubt that we’re willing to help our airlines survive and stabilize our industry while preserving jobs for our members.”

Capt. Bob Fox, ALPA’s first vice president and national safety coordinator, reported, “Through the turmoil, we’re doing everything we can to maintain the safety, health, and security gains we’ve made.” Fox talked about the coordinated efforts of the four disciplines of ALPA’s Air Safety Organization (ASO), noting, “Make no mistake, having the safety, security, jumpseat, and pilot assistance leadership of the ASO all together under one umbrella, the ASO has proven to be invaluable to our mission as they’ve worked hand in hand, day in and day out.”

Fox reiterated the need for a regulatory mandate, based on the Centers for Disease Control and Prevention guidance, to keep airliners clean and properly sanitized. He reviewed recent efforts to ensure that unmanned aircraft systems and commercial spacecraft in the national airspace don’t jeopardize the safe and efficient operations of the airline industry. And as ALPA’s Political Action Committee (PAC) treasurer, Fox noted that from January 2019 to the present, ALPA-PAC raised more than $4.6 million from more than 13,700 ALPA pilots.

“More than 11,000 of our members have received announcements of job displacements,” commented Capt. Bill Couette, ALPA’s vice president−administration/secretary. “For this reason, ALPA has given special attention to its Furloughed Pilots Support Program—a branch of the union’s Membership Committee within the Professional Development Group.” Couette reviewed the many programs and services available to the Association’s displaced members, including educational opportunities, job leads, counseling, and financial aid and hardship assistance. “Much of what is included is based on feedback from previously furloughed pilots,” he said.

Couette observed that since the BOD last met in 2018, the Association has welcomed the pilots of Air Borealis, Morningstar Air Express, PAL Aerospace, Perimeter, Provincial, and Sky Regional. However, he also acknowledged the loss of Compass, ExpressJet, and Trans States pilots, whose carriers were compelled by the economic impact of the pandemic to close their operations. Couette talked about the status of Pilots for Pilots, ALPA’s emergency relief fund, and the need for members to contribute. He also discussed the numerous advancements made by ALPA’s Information Technology Advisory Committee in updating the union’s computer network and communications capabilities to make them more efficient and productive.

Capt. Joseph Genovese, ALPA’s vice president–finance/treasurer, stressed the importance of strategic planning and the need to anticipate periodic downturns in the aviation industry. From past experience, ALPA knew “there would be tough times at some point, so we acted responsibly,” he remarked, adding, “We built up our reserves, we recapitalized our war chest, all while spending responsibly to make needed infrastructure updates as well.” Genovese continued, “We’ve also been very flexible in producing the 2021 budget, constantly adjusting as the outside world adjusted and making sure we’re working with the most up-to-date numbers.”

Genovese reviewed how the Association is limiting its spending, including a temporary ban on new investment projects related to information technology and finance, has reduced funding for the International Federation of Air Line Pilots’ Associations, and has decreased budget allocations for national committees. He also noted, “Because of state and local restrictions, we’ve been able to reduce travel expenses for both staff and pilot volunteers by postponing or limiting in-person meetings and events…. Things are still changing every day, and we remain committed to a flexible approach.”

During the course of the three-day meeting, BOD members conducted the business of the union, electing executive vice presidents and Canada Board officers, deliberating on policy issues, and listening to special presentations. They completed a strategic plan, outlining the goals, objectives, and initiatives that will guide the Association during its next two years. The latest strategic plan will be finalized and posted to www.alpa.org/strategicplan, replacing the 2018 plan as part of the Association’s ongoing effort to be transparent in its policy making and corresponding actions.

The BOD weighed in on a proposed amendment to the Association’s hearing and appeal procedures as outlined in Article VIII of ALPA’s Constitution & By-Laws. A 1959 federal law requires unions to provide “due process” protections when imposing discipline on members who engage in misconduct. While ALPA has updated its policy on several occasions to bring it more in line with current practices, the board voted to revise the current language to make the process more efficient and less susceptible to political abuse.

Board members reaffirmed that the cash payments received by some ALPA pilots who have income above the IRS Section 401(a)(17) limit constitute airline income and are subject to dues under Article IX of ALPA’s Constitution & By-Laws. ALPA’s Executive Council later reconvened and unanimously recommended that BOD members vote on whether to postpone any collection of dues on members’ “cash-over-the-cap” earnings in excess of the limit until Jan. 1, 2021, and waive all dues on these funds for the entire 2020 calendar year. This deferral will provide master executive councils (MEC) with an opportunity to communicate with their members who are affected; consider, and, if appropriate, pursue alternative retirement vehicles for these excess payments; and minimize administrative issues related to this transition. The ballot on whether to accept the unanimous recommendations of the Executive Council on this issue was mailed to BOD representatives on October 28.

In other BOD business, the Aviation Jumpseat structure will now be included within ALPA’s Constitution & By-Laws and Administrative Manual ASO descriptions. The board also received annual reports from the union’s Collective Bargaining, Education, Flight Time/Duty Time, Leadership, Membership, Retirement & Insurance, and Strategic Planning Committees as well as the ASO.

The pilots of Frontier Airlines were honored with the J.J. O’Donnell Trophy for Excellence and Political Action for their tremendous increase in both ALPA-PAC member participation as well as pilot group contribution levels from 2018 to 2019. This award, named for the former ALPA president who presided over ALPA-PAC’s creation, recognizes the pilot group that has put the most emphasis on growing the PAC, as determined by receipts and participation during the previous year. Capt. Brian Ketchum (Frontier), his pilot group’s MEC chair, thanked the Association for this honor.

Also during the plenary session, DePete acknowledged the recent passing of F/O Costas Sivyllis (United), the Association’s most recent Education Committee chair. He noted, “In 2009–2010 as a student at Embry-Riddle Aeronautical University in Dayton Beach, Fla., [Costas] was instrumental in developing ALPA’s first Aviation Collegiate Education [ACE] Club…. He went from establishing the ACE Club while a student and then selected an ALPA carrier [PSA] as his employer so that he could continue to mentor the next generation of pilots.”

Special points of privilege were taken by Capt. Will McQuillen (Alaska) and Capt. Ryan Schnitzler (Delta), their respective pilot groups’ MEC chairs, who recognized their many members who opted for voluntary early-out to ensure that more junior pilots at their carriers could continue to have jobs (see A Tribute to ALPA Pilots Taking Voluntary Early-Out in the October 2020 issue). At Alaska Airlines, 137 pilots chose to retire early. At Delta Air Lines, approximately 1,800 pilots participated in the airline’s early-out program.

In a statement, Perry said, “I’m proud of how our members continue to face the unprecedented challenges of our time with such poise and professionalism. I look forward to working on their behalf as we face the new realities caused by COVID-19 and other major issues impacting our profession.”

“From organizing the Air Midwest pilots for ALPA representation to mentoring those newest to our profession, Andy was as fierce as they come in advocating for airline pilots,” DePete remarked. “His commitment to the airline pilot community was reflected in literally everything he did.” DePete noted that Hughes dedicated more than 30 years of his life in service to the union.

As part of the award ceremony, meeting participants watched a commemorative video with pilot testimonials and photos of Hughes throughout his airline career. Members of Hughes’s family were online to virtually accept the award.

Hughes is one of only four pilots to have received this prestigious accolade. Previous honorees include Capt. Bob Kehs (Northwest) in 2000, Capt. Frank Mayne (Delta) in 2006, and Capt. Steve Luckey (Northwest) in 2010.

Following the recommendations of ALPA’s Air Safety Organization Professional Standards Committee and the President’s Committee for Diversity & Inclusion, the Board of Directors passed a resolution to amend ALPA’s Code of Ethics and Canons. The resolution noted that with current social and political events, trends and movements can easily be interpreted differently by a diverse ALPA membership and that members should strive to treat everyone with “dignity, respect, equality, and empathy.” New language has been added to the code and memorialized in ALPA’s Administrative Manual to promote citizenship, tolerance, and understanding.