ALPA members participated in the educational sessions held throughout the event. Delta and Alaska pilots took part in the popular “Airline Pilot Panel,” where female pilots field questions from conference attendees about the challenges and opportunities they’ve encountered along their paths to the cockpit. “While we may come from a variety of backgrounds and walks of life, we all share the common bond of having a vision for the advancement of women in aviation professions,” said F/O Kristina Huffman (Alaska). “This panel allows aspiring airline pilots to gain knowledge about the variety of paths available to achieving their career goals, as well as some tools for thriving when facing obstacles along the way. If my presentation connects with at least one woman in the audience and inspires her to make her vision a reality, then I’ll feel that I’m paying forward all of the support and mentoring I received.”

Almost 175 ALPA members visited ALPA volunteers during the event, receiving an ALPA pin, tie, and other items and learning about the numerous services and resources the Association provides to airline pilots and the aviation industry overall. F/O Nathalie Hacken (United) brought together 15 ALPA Education Committee representatives from Delta, ExpressJet, FedEx Express, JetBlue, and United along with 10 ALPA ACE Club members from aviation schools across the country to the conference.

ALPA’s Education Committee hosted students from ACE Clubs at Embry-Riddle Aeronautical University (ERAU) in Daytona Beach, Fla., and Prescott, Ariz., Lewis University, and Southern Illinois University at this year’s conference, who shared their experiences with ALPA and the ACE program with fellow aviation students in attendance. The students also compared notes on how the programs function at their respective schools; Lewis students, for example, learned that ERAU–Prescott students earn a waiver for a class based on the experiences they gain through the ACE Club program.

Of ALPA’s 52,000 pilots, only 2,857 are female, making up only 5.5 percent of the union’s membership. And just 7 percent of U.S. airline pilots are female. The job fair and scholarship portions of the conference work to increase these numbers by offering time with recruiters from major airlines, including Alaska, Delta, FedEx Express, JetBlue, and United during the event. More than 2,000 pilots took advantage of the opportunity. WAI reported that its members received a total of 4,640 “fast passes,” or opportunities to talk one-on-one with airline recruiters from up to three carriers.

ALPA’s Fee-for-Departure Committee is doing its share to help ALPA pilots prepare for job fairs like the International Women in Aviation Conference by hosting webinars, featuring résumé and hiring tips, and offering discounts for Cage Marshall and Kit Darby services on ffd.alpa.org. ALPA will host the next interview workshop with Cage Marshall on April 20–22 at its headquarters in Herndon, Va.

If you’re one of the many who attended the Fast Pass portion of the recent conference and got a new job, let ALPA know. Complete the Fee-for-Departure Committee’s new exit-interview form at www.alpa.org/exit so that the Association can best tailor its resources for ALPA members. Whether or not you’re now flying for an airline with ALPA-represented pilots, the union can use your feedback to better serve your fellow pilots and advance the airline piloting profession.


Nearly 5,000 people attended the three-day conference, which featured keynote speakers, educational sessions, and scholarship programs dedicated to the encouragement and advancement of women in all aviation career fields and interests. Save the date for next year’s conference: March 2–4, 2017, in Lake Buena Vista, Fla. For more information, visit wai.org. 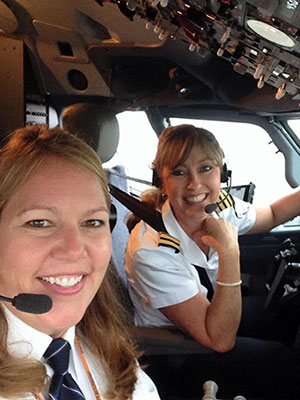 F/O Jann Lumbrazo (United), on right in photo, the Women in Aviation, International (WAI) Continental Airlines scholarship winner in 2006—the first year the scholarship came with a job offer—recalled how her aviation spark ignited: “I was eight years old, on a TWA flight, when I told my mom I wanted to be a stewardess. She said, ‘You don’t want to be a stewardess. You want to be a pilot.’” Lumbrazo said she then reached for the inflight magazine in the seat in front of her, which just happened to feature the first female TWA pilot. And that’s all it took.

Now she’s completing firsts of her own for United Airlines. Lumbrazo was recently a member of the first all-female crew in the history of United Airlines that delivered United’s newest B-737-900 to Seattle, Wash. United’s uIMPACT program set up the aircraft delivery. The program exists to help promote and empower women who work for United. Lumbrazo’s aircraft delivery might just inspire the next eight-year-old little girl to fly, who she always makes time for in the cockpit. 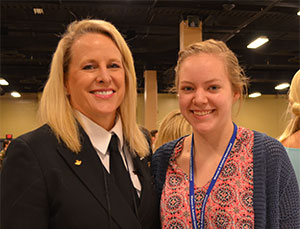 Capt. Lisa Mrozek (Delta), on left in photo, mother of three girls, brought her youngest daughter, Macy, to her right, to the conference’s Girls in Aviation event, attended by nearly 300 girls. The event featured activities targeted for girls ages 8–17, including a VFR scavenger hunt, flight simulator computer programs, science experiments that explore the properties of flight, and crafting wire bracelets with tools and guidance from the Association of Women in Aviation Maintenance.

Do you know Girl Scouts who would like to earn this Aviation Girl patch? Simply mark your calendars to participate in the International Girls in Aviation Day activities on September 24 through your local WAI chapters. Find a chapter near you at wai.org. 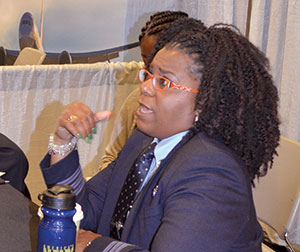 F/O Kim McCommon (JetBlue), photo right, is inspiring inner-city girls in Chicago, Ill., to consider a career in aviation. She teaches the different disciplines of aviation—from design to aviation business to the physics of flight—to students, encouraging them to ask questions of experts who visit the classroom, resources she helps coordinate to shape these girls’ futures. McCommon also volunteered at the Organization of Black Aerospace Professionals (OBAP) booth during the WAI conference. For those interested, OBAP will host a Spring Career Fair in Las Vegas, Nev., on April 27. Learn more at obap.org.

This year, WAI gave 126 scholarships to aviators in varying stages of their careers, including several ALPA members, hitting the $10 million mark since the WAI scholarship program began. 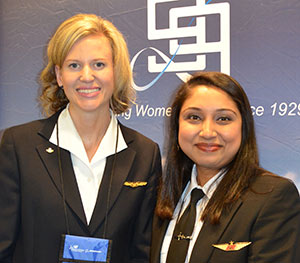 American Airlines granted a $16,000 scholarship to F/O Zalak Hoover (ExpressJet), on the right in photo, an ALPA pilot based in Dallas, Tex., and mother of a 16-month-old son, Aiden. F/O Nathalie Hacken (United), on the left in photo—the Airbus A320 Type Rating Certificate Scholarship winner in 2010—mentored “Z,” as she’s known by most, through the Ninety-Nine’s Professional Pilot Leadership Initiative program. “It’s rewarding to mentor female airline pilots rising in the ranks,” Hacken said. “It’s one thing to volunteer, but I find it’s most gratifying when I work directly with another pilot, helping her reach her goals.”

Hoover explained how Hacken invested several months helping her write her essay and mentoring her regarding interview skills, dealing with setbacks, and leadership skills. “This event has changed my life forever,” Hoover said. “I was told that I was chosen to receive a B-737 Next Gen Type Rating Scholarship but was offered a job on stage by American Airlines at the 2016 WAI awards banquet instead, which was a total surprise.”

She plans to pay it forward as well; as part of the Ninety-Nine’s program, Hoover will next enter the “navigator phase,” of the scholarship, where she will help steer another female pilot along her career path while progressing on her own flight plan to complete the program. To learn more about the Ninety-Nine’s mentoring program, e-mail mentoring@ninety-nines.org.

Inspire the next generation of airline pilots by speaking about the piloting profession in your community.

“Find a way to encourage today’s youth to aspire to a career in the aviation industry.” If you’re interested, tap into ALPA’s Education Committee, which will provide all the resources you’ll need, from a presentation to giveaways. Visit Clearedtodream.org for more information, or contact Education@alpa.org to learn how you can volunteer at future events.

Other Scholarships that Went to ALPA Members Include

This article was originally published in the April 2016 issue of Air Line Pilot.