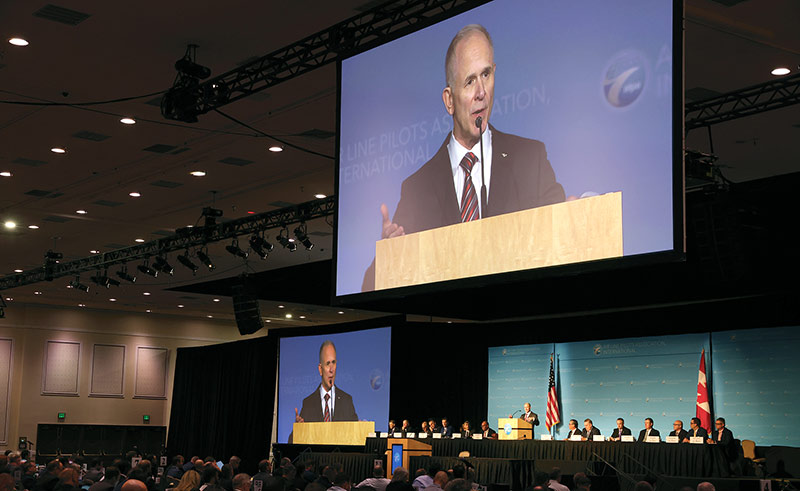 The Board of Directors (BOD), ALPA’s highest governing body, gathered in Las Vegas, Nev., October 17–20 to select new officers, conduct the business of the union, and engage in strategic planning to help guide the organization for the next two years. Approximately two hundred of the Association’s elected pilot status reps assembled together with the Association’s national officers, executive vice presidents (EVPs), and master executive council (MEC) chairs for ALPA’s 49th regular BOD meeting, convening for the first time in person since 2018 due to the COVID-19 pandemic.

This year’s event was originally scheduled to be held in Florida, but a labor dispute at the selected hotel a month before the meeting compelled ALPA to look for another union venue that could accommodate the BOD’s capacity and meeting-space requirements. ALPA’s Strategic Member Development & Resources Department, which coordinated the function, ensured that the meeting was conducted without a hitch despite the late change.

Elections were held during this year’s BOD meeting, with Capt. Jason Ambrosi (Delta), a B-757/B-767 pilot and the current MEC chair of his pilot group, voted ALPA’s 12th president. He was elected along with the Association’s other three national officers to serve four-year terms.

“As the airline industry puts the pandemic in the rearview mirror, I look forward to building a strong team that will chart a new course for our union,” Ambrosi asserted. “Over the next four years, my goal is to get back to basics and return ALPA to a member-focused representation style. Building on 91 years of leadership, together we’ll continue to enhance aviation safety, pattern bargain contracts to advance the profession for pilot groups large and small, protect pilot jobs, and improve the quality of lives for members and their families,” he remarked.

“It’s truly an honor to help lead the world’s largest pilots’ union,” said Capt. Wendy Morse (United), a B-787 pilot who was elected first vice president. “Our Association’s legacy of advancing our profession is something I look forward to continuing for all ALPA pilots,” she commented. Morse, who’s the United Council 12 chair and a former United MEC chair, will be the first woman to serve as an ALPA national officer.

Capt. Tyler Hawkins (Frontier), an A320 pilot and current Group B2 EVP, was voted ALPA’s vice president–administration/secretary. He commented, “I’m honored to continue the great commitment of representing ALPA pilots as we work together to navigate our future.”

Capt. Wes Clapper (JetBlue), an A320 pilot and ALPA Group A EVP, will serve as the Association’s vice president–finance/treasurer. “I’m humbled by this opportunity entrusted to me and committed to ensuring that ALPA leaders have the resources needed to assist their members,” he remarked.

Capt. Jeffrey Hicks (Frontier) was elected the Group B1 EVP, Capt. Douglas Grant (Hawaiian) was voted the Group B2 EVP, and Capt. Jade Schiewe (Endeavor Air) will serve as the Group B3 EVP.

The BOD meeting opened with reports from the Association’s four current national officers. The presentations highlighted the union’s many achievements and successes despite a truly difficult period in North American airline history.

“As ALPA’s president, I’ve been honored to lead this union as we’ve accomplished what many thought impossible over the past four years,” said Capt. Joe DePete in his opening report. “Beginning on Jan. 1, 2019, and more than ever today, our fight has been for what is right, what is fair, and, most importantly, what is safe.”

DePete referenced the myriad issues that arose during his administration and how ALPA responded and endured. “Working together, we persevered through a government shutdown, the grounding and return to service of the B-737 MAX, and a global pandemic that was unprecedented in its effects on public health and the viability, the very viability, of the airline industry,” he stated. “Despite all of this, ALPA pilots did what they always do. They stayed on course. We stood together. We did what needed to be done.”

Capt. Bob Fox, ALPA’s first vice president and national safety coordinator, highlighted the importance of the union’s Air Safety Organization (ASO). “Here in the United States and Canada, we’ve developed the safest air transportation system in the world,” he remarked, adding, “Through our work, we raise the standards around the globe.”

Fox touched on the Department of Transportation’s (DOT) denial of the application by Wizz Air, a Hungarian ultra-low-cost carrier that hires pilots under individual self-employment contracts, for a foreign air carrier permit to operate to and from the U.S. He noted, “We thank the DOT for upholding the FAA’s practical ability to assess the safety of foreign carriers that seek to operate to and from the world’s largest air-service market.” Fox also reported that ALPA-PAC membership is on the rise, with end-of-year member participation expected to exceed that of 2020.

Capt. Bill Couette, ALPA’s vice president–administration/secretary, followed with a retrospective look at his 16 years as a national officer and a word of caution. He noted that at the beginning of his first term in 2007, ALPA had rebounded from 9/11, only to be hit with the recession. At the end of 2008, ALPA’s membership was just more than 60,000. But due to resulting airline bankruptcies, decertifications, and shutdowns, “We didn’t break the 60,000 mark again until 2019,” Couette observed, noting, “[T]he market cycles, and things can change overnight. Just like flying, we hope for the best, but prepare for the worst.”

Couette praised the work of the Professional Development Group, which is composed of the Education, Leadership, and Membership Committees. He discussed Fee-for-Departure Committee efforts to bring regional pilot groups together and referenced the IT Advisory Committee and the many ways it’s improved ALPA’s resources for pilots.

“We came into office on the heels of a lowered dues percentage, which for me, personally, meant reworking budgets both nationally and with our MECs,” said Capt. Joseph Genovese, ALPA’s vice president–finance/treasurer. “We saw a government shutdown, the MAX shutdown, and then we had the whole industry just about shut down [from] the pandemic, prompting a change in how the entire world lived their lives.”

Still, Genovese observed, ALPA remained in good fiscal shape thanks to the work of pilot volunteers and staff lobbying for the CARES Act and three iterations of the payroll support program. “We’re on firm ground financially right now because of their work,” he said. “Without the support they earned for us, I don’t know where ALPA or the airline industry would be right now.”

DePete also honored former Cohen, Weiss, and Simon partner Stephen Moldof, who passed away in 2020. His wife and son were in attendance for the tribute.

Capt. Chesley “Sully” Sullenberger (US Airways, Ret.) addressed the BOD on Tuesday, describing in detail the events of US Airways Flight 1549. On Jan. 15, 2009, the A320 he was piloting struck a flock of birds shortly after takeoff, disabling both engines. The recent U.S. ambassador to the International Civil Aviation Organization and former military pilot described the “gut-wrenching, sickening sound as the turbines spooled down,” and the numerous considerations he and F/O Jeff Skiles were forced to make before electing to land the aircraft in New York’s Hudson River.

Sullenberger used this unique experience to highlight the value of an experienced, well-trained flight crew and the authority and responsibility current and future pilots must assume. “So how do we prepare the next generation of pilots?” he rhetorically asked the audience, expressing concerns about ongoing efforts to degrade airline pilot qualification and training standards. “There are still too many in this industry who are trying to quicken and cheapen pilot training for their own expedience and their own convenience, mostly for economic reasons,” he said, adding that safety must remain aviation’s top priority. 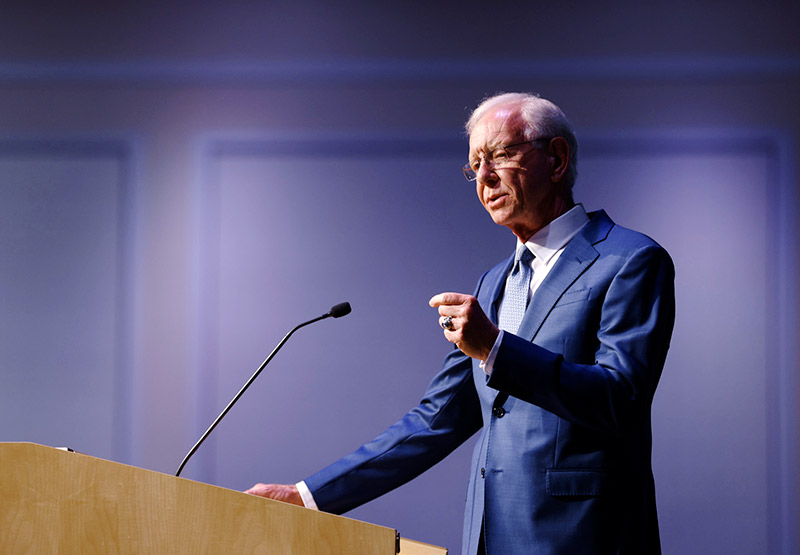 Later in the day, DOT Secretary Pete Buttigieg joined the BOD via videoconference. “Thank you to everyone at the Air Line Pilots Association for everything you do to keep us safe and strong in the air,” he commented, acknowledging the many “stresses and challenges” the airline industry and its pilots have endured in recent years. Recognizing recent obstacles like the COVID-19 pandemic and the sharp increase in unruly passenger incidents, he observed, “You helped keep America’s economy up and running, and this administration has your back.”

Buttigieg identified three points he wished to share with BOD members. “I want you to know that we’re holding strong on safety,” he noted, adding, “When it comes to the 1,500 hour rule, we know that [it’s] something that keeps us safe in the skies.” He continued, “Aviation is the safest mode of transportation, and we have no intention of losing that distinction.” Buttigieg also commented on the need to enact the flight deck secondary barriers regulations and to ensure strong pathways for future candidates who want to join the airline piloting profession.

During the meeting, the J.J. O’Donnell Trophy for Excellence in Political Action was presented to the Frontier MEC. The award, named for the former ALPA president who presided over ALPA-PAC’s creation, recognizes the pilot group that’s put the most emphasis on growing the PAC, as determined by receipts and participation during the previous year. The Association also recognized MECs with 100 percent PAC participation, which included the pilot leaders from Air Wisconsin, Alaska, CommuteAir, Endeavor Air, FedEx Express, Hawaiian, iAero, JetBlue, Kalitta Air, and United.

In addition, 24 of the union’s local executive councils (LECs) joined the ALPA Key Society for their PAC participation. Established in 2012, the Key Society pays tribute to the 24 courageous pilots who founded the Association.

In other plenary action, the BOD moved to convert and codify the President’s Committee for Diversity and Inclusion (PCDI) and the President’s Committee on Reduced Crew Operations (PCRCO) to continuing committees. The PCDI was renamed the ALPA Diversity, Equity, Belonging, and Inclusion Committee, and the PCRCO was renamed the Reduced Crew Operations Committee. The pilot leaders directed the Special Representational Structure Review Committee to make policy recommendations for consideration by ALPA’s governing bodies regarding the potential for recorded or virtual local council meetings by the fall 2023 Executive Board meeting. In addition, F/O Ellen Brinks (Delta) was presented with a presidential citation for her outstanding work as the ASO’s Aeromedical Group chair.