Advancing the Profession at OBAP Convention 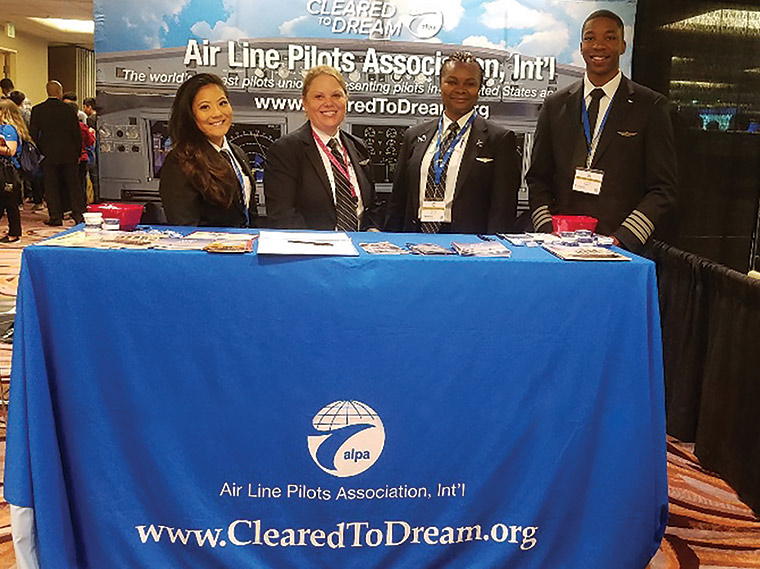 The Organization of Black Aerospace Professionals (OBAP) held its annual Convention and Career Expo in Los Angeles, Calif., on July 31 through August 2. Featuring the theme “Empowering Our Communities Through Aerospace,” the event gave ALPA an opportunity to continue its mission to advance the future of the airline piloting profession. Volunteers from the Association’s Membership Committee greeted approximately 120 ALPA members, promoted the union to non-ALPA pilots, and engaged with those interested in becoming aviators. Several ALPA members shared their stories and paths to the cockpit while offering encouragement and advice to help others attain their dream of a career in the airline industry.

Although Capt. Tahirah Brown (FedEx Express) didn’t grow up in an aviation family, she decided in high school that she wanted to become an airline pilot. Intrigued by the idea of traveling, meeting new people, and learning about different cultures, she knew that the road ahead would be challenging.

While working two jobs to pay for college and flight training, Brown met Capt. William Norwood (United), the first African American pilot at his airline, who in 1992 introduced her to OBAP. She joined the organization and was awarded OBAP scholarships to continue her training—and felt supported every step of the way. “OBAP provides mentorship and encouragement to help minorities achieve their dreams,” Brown said. “The encouragement comes from seeing people like you who’ve achieved their goals.”

Brown continued to network at other OBAP conferences and at International Women in Aviation Conferences, and in 2002 she was hired as the first African American female pilot at FedEx. Noting the importance of mentoring and participating in outreach programs, Brown continues to be active in multiple organizations, hoping to pay it forward.

Capt. Jeremy Spikes (PSA), a member of OBAP for two years, comes from a military family. In 2013 while employed by Atlantic Southeast, he took a four-year leave of absence from the airline to train and deploy to the Middle East as a U.S. Air Force reservist.

After returning to the U.S. and airline flying, Spikes remained committed to inspiring and encouraging young people by setting a positive example and volunteering. “There’s value in conveying knowledge to a younger generation across communities to promote aviation,” he said. “It’s important for kids to see and talk to a pilot about aviation. Without the visual, it’s hard for them to connect the dots. It’s equally as important to let people unfamiliar with our industry know there are resources and help available to show them the way.”

Many pilots follow in their parents’ footsteps, and Capt. Carly Namihira (Endeavor Air) is no exception. Her father, Capt. Jeffrey Namihira, flew F-15s for the Hawaii Air National Guard and worked for Aloha and Hawaiian Airlines, but she wasn’t initially attracted to the profession. Yet recognizing his daughter’s competitive nature, he encouraged her to pursue a piloting career because it would be challenging.

Namihira’s interest peaked after interacting with other female pilots. She became a member of Women in Aviation and OBAP because of the importance of both groups from a female and minority perspective. Namihira noted, “I’m proud to be a pilot, and I want to find ways to empower young girls and help them recognize and push for their dreams.” She hopes to participate in next year’s “Girls Rock Wings” career day in Houston, Tex., which is sponsored by OBAP’s Sisters of the Skies program. This STEM event gives young minority girls the chance to interact with female pilots and culminates in an opportunity to fly in a Cessna, which is often the first flying experience for these young women.—ALPA Staff


Want to Inspire and Mentor the Next Generation of Airline Pilots?