The dramatic reduction in airline flight capacity brought on by the COVID-19 pandemic is making it significantly more difficult to jumpseat, a mainstay for many airline pilots who commute to work. The Association’s Aviation Jumpseat group has been working closely with individual ALPA pilot groups to help those members affected by furloughs and airline shutdowns. The group is providing special resources to pilot group Jumpseat Committees to assist with the temporary extension of jumpseat agreement privileges (cabin seat only) to affected crewmembers.

To make it easier for ALPA members to find and access relevant cockpit jumpseating data, a new enhancement to the ALPA mobile app for smartphones and tablets was released in March. This improvement provides users with specific details about how to list for the jumpseat on another carrier. The update includes information about the process involved as it relates to the specific agreement between the pilot’s airline and the carrier whose jumpseat he or she wants to access. Along with this feature, the Association launched a notification center to serve as an inbox to view all mobile app push notifications delivered to ALPA pilots.

Prior to the new jumpseat enhancement, the app presented only generic facts about jumpseat agreements, requiring pilots to conduct additional research to find airline-specific procedures such as how to list and check in. Many regular jumpseaters were compelled to maintain separate lists of usernames, passwords, phone numbers, and other codes for the carriers they frequented, and, like any security access information, those details were subject to change. 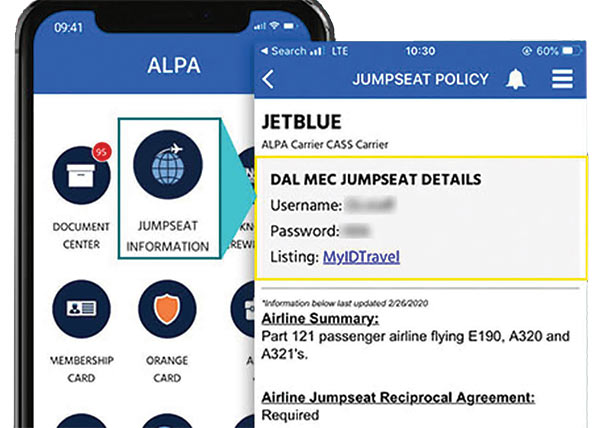 The latest enhancement is a priority of Capt. Joe DePete, ALPA’s president, and an important planning tool for pilots tasked with flying during these difficult times. Upon the feature’s release, Capt. Rich Odbert (FedEx Express), ALPA’s Aviation Jumpseat chair, remarked, “This is just the first of several jumpseat-related improvements we’re planning for the ALPA app.”

The next upgrade planned for the app is a specialized flight finder that, when completed, will allow jumpseaters to determine the best available flights to reach a specific destination. The new feature will include custom search options to find jumpseats across passenger and cargo carriers, number of legs, layover locations, and other options. The flight finder will eliminate much of the current guesswork currently involved in determining the best existing options.

“Being able to combine all cargo and passenger flight data has been a feature we’ve been excited to work on, particularly since it isn’t available on most other industry-leading apps,” said Odbert. “We’re collecting flight data information from multiple sources and refreshing it faster to offer the most up-to-date information, even when contending with crises like the coronavirus pandemic, which often result in rapidly changing flight schedules. Using pilot focus groups, we’re tailoring the ALPA app flight finder to meet the unique needs of airline pilots.”

The flight finder feature is currently under development and is expected to be available later this year.

Current ALPA jumpseat resources include a Jumpseat Guide, including a separate Canadian version, that highlights the complete jumpseating process and the captain’s role as pilot-in-command of the aircraft. In addition, the Association’s “Jumpseat Etiquette? Yes, Please!” video emphasizes that cockpit jumpseating is a privilege as opposed to a right and that it comes with certain expectations and responsibilities. The video explains the protocols to be followed along with the appropriate courtesies that should be extended to customer service agents, flight attendants, and the pilots flying the plane.

These and other resources are housed on jumpseatinfo.org, which contains the most comprehensive library of cockpit jumpseat information in North America. ALPA’s Aviation Jumpseat group is a component of the Association’s Air Safety Organization.

For questions about jumpseat-privilege extensions at your airline or other jumpseat-related inquiries, please contact your MEC Jumpseat Committee.

This article was originally published in the May 2020 issue of Air Line Pilot.