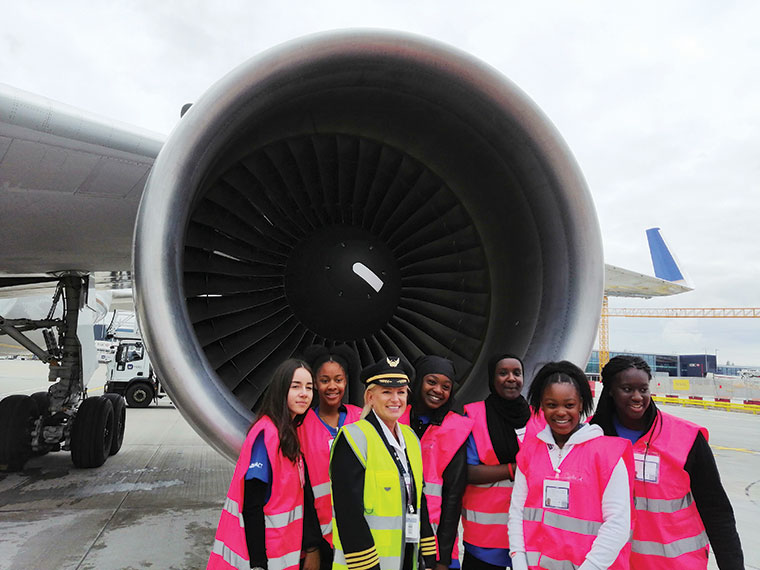 Capt. Jill Kost (United) poses with a group of girls in front of an aircraft at London’s Heathrow Airport.

Approximately 20,000 attendees participated in 118 events around the world—making Women in Aviation International’s (WAI) October 5 Girls in Aviation Day 2019 a tremendous success. At these events, attendees talked with aviation professionals—including ALPA members—explored aircraft and other static displays, participated in hands-on activities, and learned about the industry as well as career opportunities.

ALPA’s Education Committee and dozens of pilot volunteers championed the initiative and were at airports, universities, and elsewhere to introduce young girls ages 8 to 17 to the profession. Although women have been flying for more than a century, today only 6 percent are airline pilots. Many female pilots have found that young girls don’t know that they, too, can fly. ALPA has been working to spark their interest in aviation and help them find their way to the flight deck.

“The importance of mentorship can’t be overstated,” said F/O Costas Sivyllis (United), ALPA’s Education Committee chair. “This is a crucial time for our profession, and we need ALPA pilot role models in front of young people, opening their minds and inspiring them to look skyward for their future career paths.”

F/O Kaori Paris (United), who was at WAI’s Capital Region Chapter event at the Culpeper Regional Airport in Culpeper, Va., observed, “It’s an eye-opening experience for those girls who’ve never met a female aviator, and the look on their faces is priceless.” She talked with many young women throughout the day about her love of flying and encouraged them to pursue careers they feel passionate about.

“I’ve met so many young ladies who wouldn’t have otherwise considered being a pilot as a career,” remarked Capt. Catherine Plasschaert (Delta), who has two teenage daughters and was at the WAI Stars of the North Chapter event at Flying Cloud Airport in Eden Prairie, Minn. “When they see the enthusiasm I have for my career, they get excited about the possibility of this career for themselves.”

“Being a pilot is intimidating for so many young girls, and I want to educate them that they can do it and that it’s possible to have a family and fly,” stated F/O Leah Golden (United), who supported the WAI Bluegrass Chapter event at Bowman Field in Louisville, Ky., with F/Os Kara Hatzai (United) and Beth Phelps (United).

Phelps credited twin sister Golden with introducing her to the profession and worked to “spread the word so that young girls know from an early age that there’s definitely a place for them in aviation.”

“If I had someone to talk to when I was young, I probably would have chosen a career as a pilot much earlier in life,” reflected Hatzai. “I want to be that pilot who connects with a young girl and helps her realize all the possibilities in life.”

In Ontario, WAI’s Upper Canada Chapter hosted its first Girls in Aviation Day event at the Canadian Warplane Heritage Museum. F/O Stacey Jackson (WestJet), the chapter’s president, remarked, “We had so many volunteers that every girl could have one-on-one conversations with pilots, flight attendants, air traffic controllers, and maintenance engineers. One young lady expressed that she never knew aviation was so much fun.”

F/O Tracy Vazzana (United) attended the Girls in Aviation Day event at Saint Louis University with her teenage daughter. She recalled, “So many people helped me along the way. I’m so thankful for their support and want to do the same.”

Across the pond, Capt. Jill Kost (United) welcomed girls to the United Airlines offices at Heathrow Airport’s Terminal 2. “Many of these girls had never been to an airport,” she noted. “As you can imagine, London Heathrow is quite impressive. The girls were filled with excitement about all the possibilities available to them. It was very rewarding to spend time with them; they really made an impression on me, as I hope I did with them.”

The next international Girls in Aviation Day is planned for Sept. 26, 2020. For more information or to get involved in ALPA’s educational outreach program, contact Education@alpa.org. 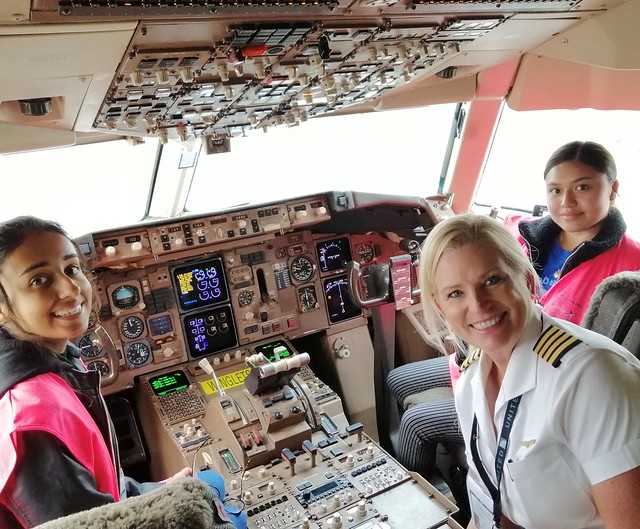