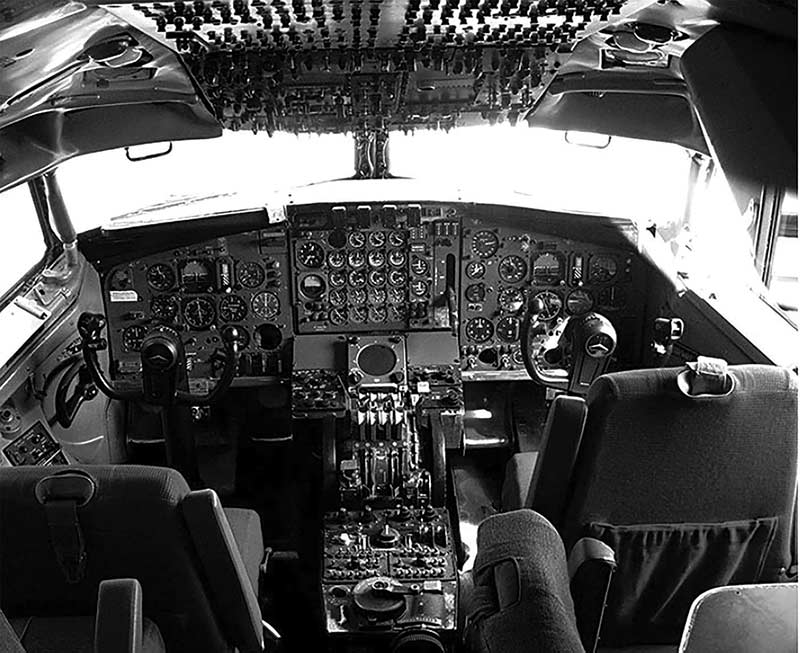 Editor’s note: This year marks the 90th anniversary of ALPA’s founding. As “the conscience of the airline industry,” the Association has been at the forefront of advocating for safety and security advancements to protect pilots and their passengers and cargo. In each issue of Air Line Pilot, a technology or topic that the union has championed will be highlighted.

With roots in airmail, the 24 “Key Men” who founded ALPA in 1931 flew in simple aircraft made of steel tubing with a covering of doped cotton fabric. The airplane’s cockpit had a tachometer, altimeter, and oil temperature gauge and included a lever for the throttle, a stick to control the ailerons and elevator, pedals for the rudders, and a few switches for lights and the fuel tanks. But it didn’t have a compass, airspeed indicator, or fuel gauge.

As the industry evolved, so did the capabilities of the aircraft and the technology found on what today is referred to as the flight deck. The increased responsibility of carrying dozens of passengers meant that pilots needed access to more information and new technologies, more control of the aircraft, and additional crewmembers to help manage the workload,

Shortly after World War II, numerous aircraft designs were being rushed into production to meet the rising demand for air travel, and instrument panel arrangements became widely varied from airline to airline—even from airplane to airplane within the same airline.

In 1950, ALPA’s Board of Directors set a policy goal of standardizing these layouts, and development of the “basic T” began. ALPA’s Cockpit Standardization Committee—in consultation with several airline managements; the Civil Aviation Agency; and the U.S. Air Force, which was working on a similar initiative—determined that the best layout placed the airspeed indicator, attitude indicator, and altimeter in a row from left to right and the direction indicator under the “false horizon.”

“With the basic T, wide area scanning was eliminated, as all the vital information was concentrated in the smallest practicable visual field, centered on the controlling attitude instrument,” said Capt. Joe Kelley (TWA, Dec.) in a 1958 issue of Air Line Pilot.

With ALPA’s endorsement, in 1956 the Lockheed Electra was among the first aircraft designed to incorporate ALPA’s basic T, and in 1957 the International Federation of Air Line Pilots’ Associations adopted it as the worldwide pilot standard for its member organizations.

The design was later expanded to The design was later expanded to include additional instruments, forming a basic “six pack” arrangement, and was used in general aviation aircraft like those manufactured by Cessna and Piper, but ALPA’s basic T remains at the core of the traditional “steam gauge” instrument panel and is the basis of modern primary flight display layouts.

Improvements, Inside and Out

Building on the success of the basic T, ALPA pilots and staff began working with aircraft manufacturers to provide pilot input during the design phase of new aircraft, advocating for safety enhancements, including the use of new technologies.

The first major safety enhancements came in the wake of the 1955 crash of a TWA aircraft in New Mexico that was originally attributed to an intentional act of the flight crew. Additional investigation by ALPA pilots and staff engineers discovered that gauges on one side of the instrument panel used by the captain could—unbeknownst to the crew—display different flight information from those on the other side used by the first officer. Armed with that knowledge, manufacturers began equipping flight decks with instrument comparators to alert pilots if the captain’s and the first officer’s altimeters, airspeed indicators, compasses, and other instruments weren’t showing the same information. As navigation and flight control technology advanced, autopilot and autoland systems were outfitted with comparators as well.

ALPA pilots also advocated for the installation of traffic alert and collision avoidance systems (TCAS) in airliners. The resulting TCAS alerts have greatly increased pilots’ awareness of other air traffic and have significantly reduced the risk of midair collisions involving TCAS-equipped aircraft.

Further improving safety was the addition of cockpit voice recorders (CVRs) and flight data recorders (FDRs) on aircraft. Pilots saw the potential in having data available to aid in accident investigation and prevention, and the first rules requiring the installation of such devices went into effect in 1967. Thanks to ALPA’s support, today’s FDRs can record hundreds of parameters ranging from basic values such as altitude and speed to details such as rudder pedal position, the position of each switch, and even the onset of smoke alarms in the lavatory. To this day, ALPA actively defends against any potential misuse of CVR recordings (See “Training for Someone Else’s Worst Day”).

As the reliability of the equipment installed on the flight deck improved, and aircraft began flying at faster speeds and higher altitudes, the need to see ahead of an airplane’s flight path increased. With hazardous weather, including thunderstorms and unusual wind conditions, a major threat to the safety of flight, ALPA recognized that flight deck weather radar was a vital tool to help pilots avoid such convective weather phenomenon. While airlines originally balked at the costs of installing flight deck weather radar, ALPA lobbied all levels of government to make the technology mandatory on airliners and succeeded in its efforts.

Beyond advocating for the installation and use of new technologies on the flight deck, ALPA proactively defends the use of existing ones.

Ignoring ALPA’s decade-long opposition, the FCC issued a license to transmit to Ligado Networks (formerly LightSquared) over the objections of not only ALPA, but also nearly every other U.S. government agency and more than 68 organizations representing the interests of aviation, the military, first responders, meteorology, trucking, maritime, agriculture, and construction.

Shortly thereafter, ALPA joined a coalition of aviation and aerospace organizations asking the FCC to reconsider parts of its pending award of the radio spectrum to 5G wireless providers to protect aviation safety and to revisit how it applies protections to adjacent band radar altimeter operations that are essential to safe air travel.

First required to be installed on transport aircraft in 1974, radar altimeters are the only sensor on board a civil aircraft that provides a direct measurement of the clearance height of the aircraft over terrain or other obstacles, and failures of these sensors can lead to catastrophic accidents.

“The planned implementation of a 5G mobile wireless system in this frequency band doesn’t take into consideration existing users on nearby frequencies, including aviation,” said Capt. Joe DePete, ALPA’s president, in a statement supporting the petition for reconsideration. “Deploying 5G near the radio altimeter frequency—used on commercial aircraft—without adequate testing and validation that the protections are adequate could pose a serious threat to safe flight during critical operations such as landing during bad weather and fog.

“Additionally, the interference could render useless important safety equipment onboard aircraft such as the terrain awareness and warning system, which is required on all U.S. commercial aircraft and has led to zero passenger fatalities due to controlled flight into terrain for the past 15 years,” DePete observed. “ALPA urges the FCC to take an active role in ensuring a safe 5G deployment in this band.”

Just as it’s done for the past 90 years, ALPA will continue to advocate for flight deck and aircraft enhancements that aid pilots in safely transporting their passengers and cargo day in and day out to destinations around the globe.


Hardened Doors Are Critical for Security

On July 22, Congress introduced the Cargo Flight Deck Security Act of 2021, which would require the installation of intrusion-resistant flight deck doors on all-cargo airliners. The bipartisan legislation will not only protect pilots and cargo on these flights, but it will also ensure the safety of all those who share the airspace.

Encourage your elected representative to support this legislation to advance the Association’s goal of one level of safety and security for all airline operations. Take action now and make your voice count.