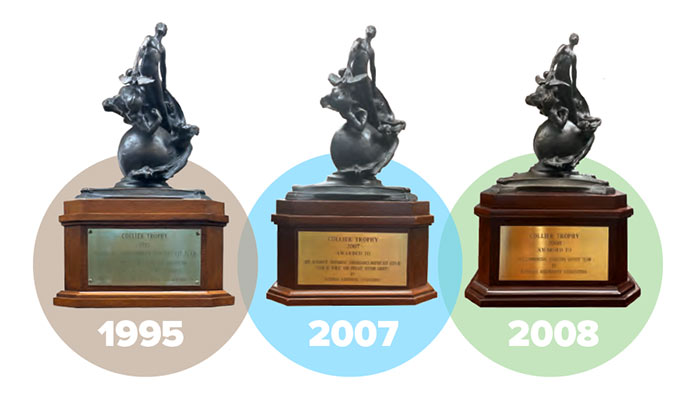 ALPA and the teams it’s participated on have been awarded the prestigious Collier Trophy three times.

Editor’s note: This year marks the 90th anniversary of ALPA’s founding. As “the conscience of the airline industry,” the Association has been at the forefront of advocating for safety and security advancements to protect pilots and their passengers and cargo. This year, in each issue of Air Line Pilot, a technology or topic that the union has championed has been highlighted.

Of ALPA’s strategic goals, the safety and security of the Association’s members and their passengers and cargo is the original cornerstone. In 1931, ALPA’s mission was simple: to keep airline pilots alive, and “Schedule with Safety,” the union’s motto, continues to be the Association’s guiding force.

In the 90 years since the Association’s founding, ALPA members have been at the forefront of championing important safety advancements, so much so that ALPA’s input is actively sought in the design, manufacture, test, and production phases of numerous projects. And for that work, ALPA and the teams it’s participated on have been recognized with the Collier Trophy on three separate occasions.

The Robert J. Collier Trophy is awarded annually “for the greatest achievement in aeronautics or astronautics in America, with respect to improving the performance, efficiency, and safety of air or space vehicles, the value of which has been thoroughly demonstrated by actual use during the preceding year.”

In 1910, Collier commissioned the trophy, which is awarded by the National Aeronautic Association (NAA), to encourage the American aviation community to strive for excellence and achievement in aeronautic development.

In 1939, U.S. airlines were recognized for their impressive safety record. But with the onset of World War II, the Cold War, and the Space Race, individual military officers, projects, and technological gains became the primary recipients of the trophy. However, as world tensions cooled, commercial projects that enhanced quality of life and improved various industries were awarded with the trophy.

In 1996, the NAA bestowed the 1995 Collier Trophy to Boeing and the “Working Together” team, which included ALPA, that designed, manufactured, and introduced into service—including extended-range twin-engine operations performance standards from production—“the world’s most advanced commercial airplane transport, the Boeing 777.”

Regarding the award, Capt. J. Randolph Babbitt, then ALPA president, said, “This was truly a team effort, and we were delighted when Boeing insisted that the entire team take a bow along with them.” He added, “The rollout of the 777 was a technological feat twice over. First, the aircraft itself is a marvel of modern technology. Second, at every step of the design and certification process, Boeing was far ahead of the game because of the prodigious amount of preparatory work that was done through computer modeling, testing, and input from the many members of the Working Together team.”

As a member of that team, Babbitt noted, “We were offered quite an opportunity. It was a bold step on the part of Boeing to allow us to participate in the design of the aircraft. They offered us a lot of trust in doing that. We put together a first-class team, and I think we earned every ounce of that trust.”

In 2007, ALPA was again honored as part of the team that developed automatic dependent surveillance-broadcast (ADS-B).

ADS-B allows aircraft to continuously broadcast their own GPS-determined position, rather than relying solely on the ground-based radar network for surveillance, which enhances safety and increases airspace capacity and efficiency as a result. For more than 12 years, ALPA worked on the technology with a coalition of private- and public-sector organizations, all of which received the award for their part in the effort.

Airliners equipped with ADS-B technology send and receive essential position data, thereby improving situational awareness in the air and on the ground for both pilots and air traffic controllers. In addition, the resulting flight data—such as the departure time of a flight from the gate and the estimated time when a flight will touch down—is used by the airport, air traffic control, and airline managers to more effectively manage surface traffic. As a result, airlines, pilots, and the traveling public benefit from improved gate management, shortened taxi time, more-efficient flight departures, and reduced fuel consumption.

“ADS-B is a groundbreaking effort for next-generation airborne surveillance and cockpit avionics,” noted Walter Boyne, the NAA Collier Selection Committee chair, in 2007. “Its implementation will have a broad impact on the safety, capacity, and efficiency of the national airspace system.”

“ALPA is extremely honored to be among this year’s Collier award recipients,” said Capt. Brian Townsend (America West), chair of ALPA’s National Airspace System Modernization (NASMOD) Committee, at the time. “Airline pilots know that the need to modernize U.S. airspace couldn’t be more urgent and that this technology forms the foundation of those modernization efforts.”

“ADS-B is a winning proposition for the entire aviation industry,” added F/O Bill Riley (US Airways), team leader for ALPA’s ADS-B project. “We hope that the visibility this important award creates will spur the FAA, airlines, and others to put ADS-B in place swiftly and enable the flying public to reap its benefits.”

In 2008, the Commercial Aviation Safety Team (CAST), which included ALPA, received the Collier Trophy for its role in advancing aviation safety.

A decade earlier, U.S. Vice President Al Gore, Department of Transportation Secretary Rodney Slater, and FAA Administrator Jane Garvey created the Safer Skies Program, which led to the development of the government-industry Commercial Aviation Safety Team. CAST was charged with reducing the airline fatal-accident rate by 80 percent over 10 years from 1997 to 2007.

“CAST’s tremendous collective effort began more than 10 years ago with ALPA as a charter member,” said Capt. John Prater, then ALPA president. “Today, through the tremendous resources provided by many organizations and the tireless dedication of hundreds of individuals, CAST has eliminated significant risks and created a quantum leap in aviation safety.

“The Collier Trophy and the remarkable success of CAST are a tribute to the powerful potential of government-labor-industry collaboration and the tremendous benefit that it holds for all who rely on air transportation,” Prater observed. “ALPA looks forward to continuing to work with CAST in what must be a relentless pursuit of an ever-safer aviation industry.”

“Through ALPA’s Air Safety Organization, which is composed of more than 425 pilot representatives in the U.S. and Canada who are supported by the Association’s dedicated staff of subject-matter experts, ALPA continues to provide the line-pilot perspective to champion aviation safety, security, and government policy,” said Capt. Joe DePete, ALPA’s president.

“The Association remains steadfastly dedicated to keeping the skies safe and passengers and cargo moving efficiently to their destinations, honoring a commitment made more than 90 years ago.”