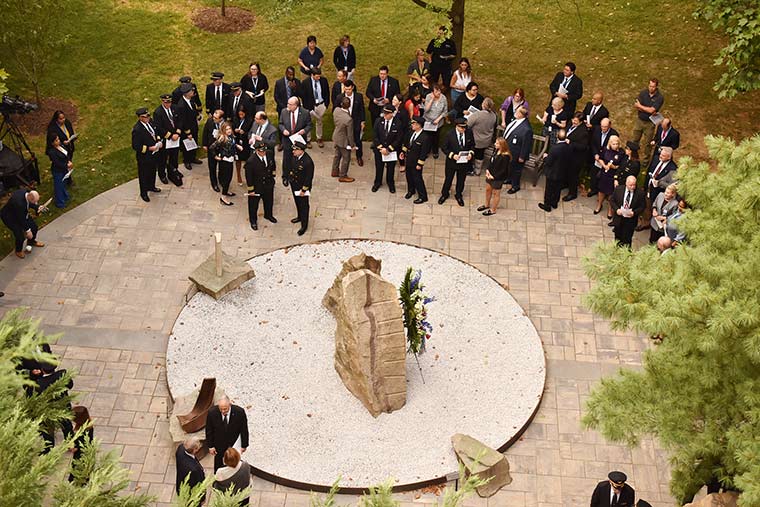 Capt. Joe DePete, ALPA’s president, opened the Association’s 9/11 ceremony in the Remembrance Garden at the union’s new offices in McLean, Va., on September 11 by quoting a Brazilian champion martial artist. “‘Anger brought me to jiu jitsu, but love made me stay.’ I imagine that many of us gathered here today vividly recall the anger we felt when the United States was attacked on the morning of Sept. 11, 2001.”

Speaking to the many pilots, family members, friends, and staff who gathered on the solemn day, DePete remarked, “We responded to the violence and injustice of the attacks by seeking solace in our families and friends. We soon realized, however, that anger wouldn’t create solutions or safeguard air transportation.

“Every day, our more than 63,000 ALPA members and staff work together with others across our industry to advance safety and security for our passengers, cargo, crews, and communities,” DePete continued. “One recent example is ALPA’s response to recently proposed changes that would have weakened the security of the Known Crewmember® [KCM] program. ALPA and other stakeholders worked together to develop improvements that strengthened the KCM program, addressed security concerns, and received the approval of the Transportation Security Administration.”

Building on DePete’s comments, Capt. Todd Insler (United), his pilot group’s Master Executive Council chair, asserted, “On Sept. 11, 2001, we saw people choose duty in the face of fear, as crewmembers and passengers fought back against evil. We saw humanity at its finest, as first responders ran toward the flames and into crumbling buildings to save lives. We saw strangers helping strangers in the small Canadian town of Gander in Newfoundland…, and we saw courage in our ranks, as crewmembers managed to fight through the darkness and return to work.”

“On this day, we are reminded that the world is not without evil,” stated Capt. Tim Perry, ALPA Canada president. “While there is great darkness, there is also the unmistaken light of goodness in the people who share the values of peace and freedom—values that must, and do, unite us. These values span across borders and, in particular, our border.”

“Every year, we ask the question, ‘Where were you that day?’ With every year that passes, our memories of that day may fade a little,” said Ron Rindfleisch, an ALPA Representation Department staff member, who spoke to the crowd. He urged that “we must never forget the feelings we felt and remind everyone, including future generations, how the world changed.”

In honor of those who lost their lives on that tragic day 18 years ago, Capt. Bill Couette, ALPA’s vice president–administration/secretary, and Capt. Joseph Genovese, ALPA’s vice president–finance/treasurer, placed a commemorative wreath on the split-rock memorial. DePete then read the names of each of the pilots, flight attendants, and other airline employees who were aboard United Flights 93 and 175 and American Flights 11 and 77 on Sept. 11, 2001, as Capt. Bob Fox, ALPA’s first vice president, tolled a bell in remembrance. Jody Krazeise, a staff member from the Association’s Communications Department, led those gathered in singing “Amazing Grace” and “America the Beautiful.”