21 Years After 9/11: Using Our Shared History to Make a Strong Future 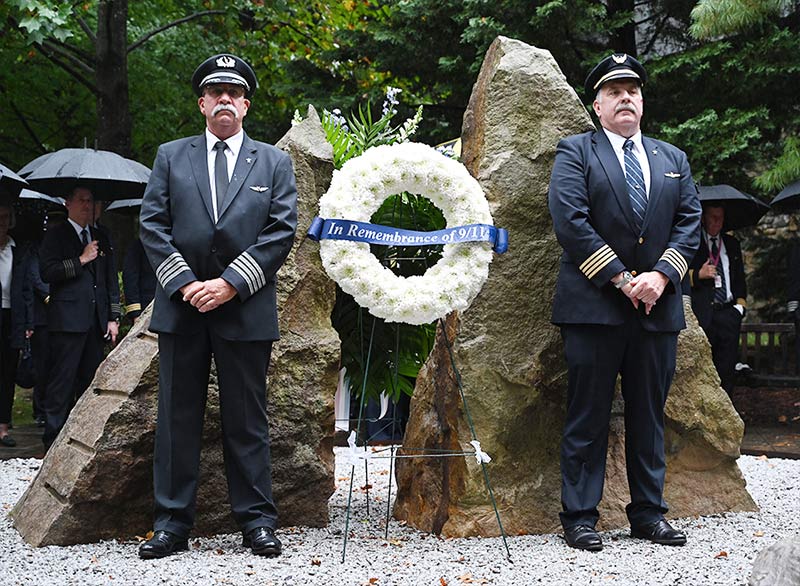 On a rainy, gray Sunday morning, more than 100 ALPA pilots, staff members, and guests gathered in the Association’s 9/11 Remembrance Garden outside its offices in McLean, Va., to honor the nearly 3,000 people who lost their lives 21 years ago. The ceremony was a time to come together, to remember those who perished in the terrorist attacks, and to remind the world of ALPA’s ongoing promise: We will never forget.

“The experience of the tragedy is forever and indelibly etched in our minds,” said Capt. Joe DePete, ALPA’s president. “The pain of the loss cuts now with the same intensity we felt that September day more than two decades ago.”

With each passing anniversary, there are more and more ALPA pilots who have little or no memory of the events of 9/11; they were just young children at the time. And soon, there will be pilots in the Association born after that tragic day. But, as DePete remarked, that doesn’t diminish our responsibility.

“It isn’t necessary to have lost—or even lived—during the attacks of 9/11 to share the determination to prevent such a horrific act from ever happening again,” he stated. “The legacy emerges from a common remembrance that’s indifferent to youth or years. Indeed, we all carry it with us. We must if we’re to truly honor those we lost by bringing about meaningful change.

“We honor the mothers, fathers, sons, daughters, husbands, wives, and loved ones who died,” he continued, “and we’re committed to ensuring their legacy lives on.”

Hamilton observed that 9/11 uncovered “the remarkable truth that heroes live among us,” from pilots and passengers to first responders to all who came to offer assistance following the attacks. He remarked that ALPA members must continue that collective action, noting, “We’ve waited long enough” for the installation of secondary barriers on all aircraft and need to continue the push on this action.

And Hamilton echoed DePete’s request for the future. “It’s important that we continue to honor the memory of our beloved colleagues and friends by ensuring their contributions to our profession endure in the next generation of pilots.”

Perry addressed ALPA’s answer to the attacks rather than focusing on the tragedy when he spoke. “Our answer is the continued, undying efforts in service of our noble and honorable profession,” he said. “Our answer is the strength and unity that we must always nurture in ourselves and in one another. Our answer is in continuing to demonstrate our resilience in the face of any challenge, together.

“If there’s one thing we can take away from these past two years,” Perry said, “it’s that during the darkest day there’s always light on the horizon.” He urged, “We must cherish the life we have the opportunity to live and share with those we love.”

DePete honored each of the pilots, flight attendants, and other airline employees who were on board the fateful flights of Sept. 11, 2001, by reading their names out loud as Capt. Bob Fox, ALPA’s first vice president, tolled a bell for each one.

Early in his remarks, DePete quoted American author, poet, and civil rights activist Maya Angelou: “History, despite its wrenching pain, cannot be unlived, but if faced with courage, need not be lived again.” He returned to that theme at the end of ALPA’s remembrance ceremony, observing, “Today, airline pilots and all of us gathered remember as one. Together, we honor those who’ve fallen and use our shared history to make a stronger future.”