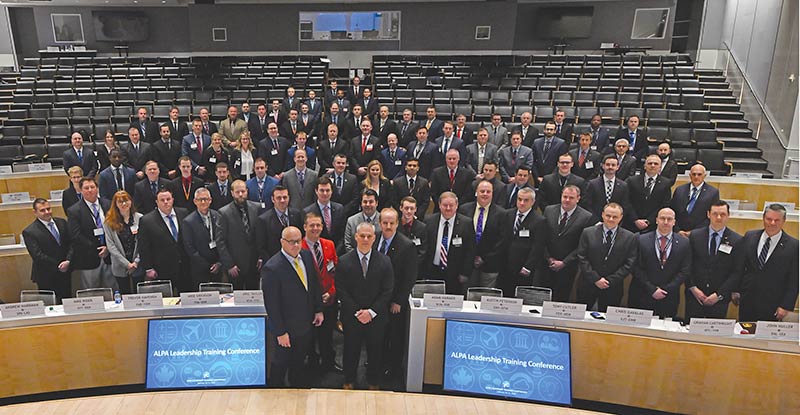 Participants of ALPA’s Leadership Training Conference take time out for a photo during the meeting held at the Association’s McLean, Va., offices.

As one of the more than 63,000 members of the Air Line Pilots Association, International, one of the first people who likely comes to mind when you think of ALPA is your local council rep or officer. This is the person you can turn to when you have questions about your labor contract, progress at the collective bargaining table, or the status of grievances or disciplinary actions. This frontline leader is there to help you regarding your daily work life as an airline pilot and is your point of contact for all things ALPA.

In addition to addressing contract and company policy issues, your reps make up your pilot group’s master executive council (MEC) and, along with the other status reps from all 104 local councils, compose ALPA’s Board of Directors (BOD). In this role, they’re able to brief you on larger issues influencing the union, the aviation industry, and the airline piloting profession. As members of the BOD—the union’s highest governing body—these dedicated men and women represent your interests in making the governing decisions of the union.

To bear this responsibility and effectively represent line-pilot interests, new local council reps gathered at ALPA’s McLean, Va., offices on February 10–13 for the Association’s annual Leadership Training Conference. For four days, they heard presentations from the Association’s subject-matter experts and participated in thought-provoking discussions and role-playing exercises. They met with the union’s national officers, talked with national committee chairs and professional staff members, and networked with their peers, learning what it means to lead the world’s largest union of airline pilots.

Approximately one-third of ALPA’s status rep and local council officer positions are elected every three years, providing the union with both consistency from the reps who remain in office and fresh ideas from those who are newly elected. To ensure that all local leaders are trained and ready to fulfill their duties, those who took office since last year’s conference along with those taking office on March 1, 2020, were invited to participate. Attending this year’s conference were 70 local council leaders from 25 of the Association’s 35 pilot groups, along with MEC officers and previously trained local council officers interested in brushing up on their knowledge and skills. 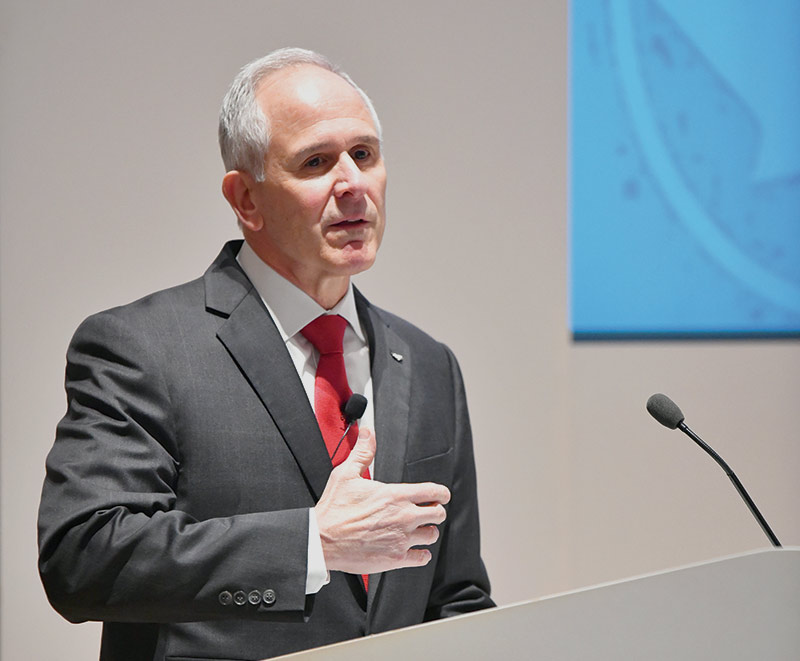 ALPA’s national officers welcomed the union’s newest elected officials, talking about their areas of responsibilities and sharing insights about the local council and its authority and influence.

“Thank you for being here today and for taking up the mantle of responsibility to represent your pilot group and this mighty union,” Capt. Joe DePete, ALPA’s president, told the attendees in his opening remarks. “While the work ahead may seem daunting, I hope that at the end of this Leadership Training Conference you’ll more fully recognize that you’re not alone in the arena,” he added, referencing the many resources, pilot volunteers, and professional staff who can help. DePete later gave a state-of-the-union presentation, examining the Association’s current slate of challenges and priorities.

As the national officer overseeing the Leadership Committee, which hosts the annual training conference, Capt. Bill Couette, ALPA’s vice president–administration/secretary, gave several insightful presentations, covering the fundamentals of governance, elections, and balloting. He talked about Robert’s Rules of Order and the mechanics of running an efficient local council meeting. “I want to do more than just give you the tools,” Couette remarked. “I want you to fully understand how to use them.” 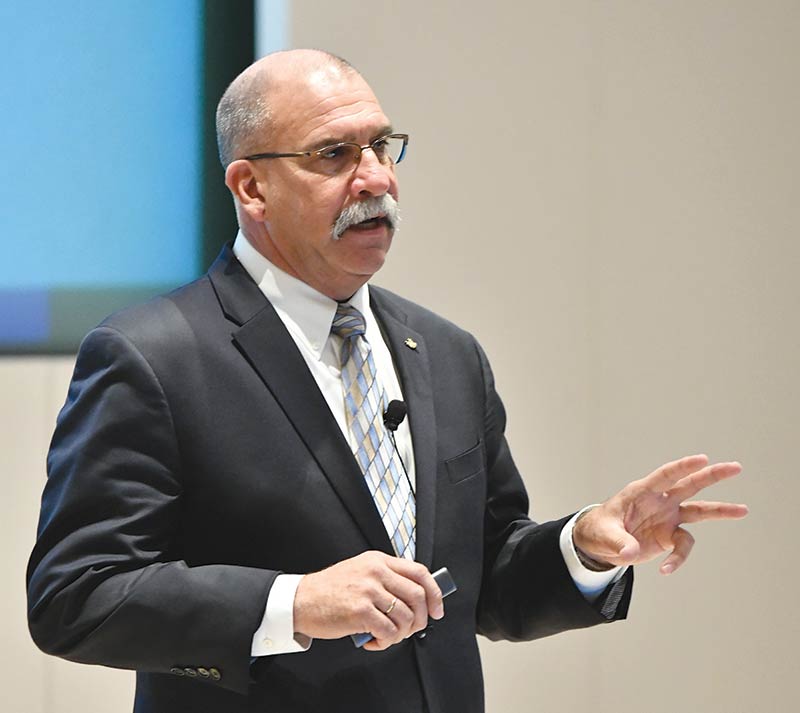 Capt. Tim Perry, ALPA’s Group C executive vice president and ALPA Canada president, addressed issues confronting Canadian members and the progress that’s been made with Canada’s new pilot-fatigue regulations “Canada’s major airlines have until mid-December of this year to implement new flight- and duty-time limits, based on the science of sleep cycles and circadian rhythms,” he noted.

“You’re going to make a difference”

“We designed this training to help you be a successful rep,” said Farmer, adding, “You’re going to make a difference. You’re going to help your fellow pilots whether it’s individually with grievances or discipline issues or collectively in the negotiating process and promoting the profession.”

Under the Leadership Committee’s direction, conference attendees were instructed in the elements of effective group decision-making, the nuances of running meetings and supervising committees, and the union’s obligation to represent all pilots at every ALPA pilot group fairly, in good faith, and without discrimination. They also learned about the importance of soliciting feedback from their member pilots to determine the actions and direction of the union.

Local council leaders were thoroughly briefed on the role each pilot group’s MEC plays in conducting contract negotiations, how to work with negotiating committees to meet collective bargaining goals, and the importance of enforcing contract terms once those goals are secured.

Attendees engaged in breakout sessions that included mock MEC meetings and hypothetical disciplinary investigations to apply what they learned and to consider the recommended practices passed along by experienced pilot leaders, staff professionals, and other subject-matter experts who spoke at the conference.

In addition to reviewing ALPA’s Constitution & By-Laws and Administrative Manual and individual MEC policy manuals, which serve as the foundation for the union’s structure and offer guidance on the daily conduct of ALPA business, local council leaders also learned about the basics of the Railway Labor Act and the Canada Labour Code—and their jurisdictions over airline pilot negotiations in the United States and Canada.

Conference participants explored what they can and can’t do when hosting interactive web pages, chat rooms, and social media sites. They discussed the importance of ALPA’s strategic plan in helping to guide the union in every decision it makes. They heard about services like the ALPA Aeromedical Office and its work to help members retain their medical certification.

Other resources covered during the seminar included the Air Safety Organization’s (ASO) Pilot Assistance Group, which encompasses the Aeromedical Committee (and its new Pilot Peer Support program); the Critical Incident Response Program for members involved in accidents and serious incidents; HIMS, which addresses alcohol and substance abuse; Professional Standards, which helps deal with interpersonal conflicts; and Pilot Assistance–Canada, as well as the many initiatives of the ASO’s Aviation Safety Group. Also discussed were ALPA’s special programs for military veterans, for fee-for-departure pilots interested in upgrading to larger airlines, and for members on furlough; pilot-focused retirement and insurance plans; and a host of other services tailored to the needs of airline pilots.

Among the conference’s many presenters, Capt. Evan Cullen, the president of the Irish Air Line Pilots’ Association (IALPA), provided a look at airline pilot representation in the EU. IALPA represents 1,200 professional pilots working in Ireland and abroad, and Cullen examined the pilot employment practices of Ryanair, the Irish low-cost carrier.

“You go to work for a pilot service company,” said Cullen, an Aer Lingus A320 pilot, adding, “You don’t work for the airline.” The IALPA president commented on the numerous pilot bases at Ryanair that compete with one another for flying, the 28 different sets of labor laws in play, and the precarious tenure for individual members who in any way challenge the system.

“This isn’t an Irish pilot problem,” he asserted. “It’s a problem for all airline pilots,” Cullen continued, adding that any nation’s pilot protections can be stripped away if not carefully guarded.

Air Line Pilot spoke with several of the local council reps and officers attending the conference to learn more about them and what they hoped to take away from the four days of training.

F/O Steven Bush (Alaska) with Local Executive Council (LEC) 64 in Anchorage, Alaska, and a previous Pilot-to-Pilot volunteer, acknowledged that as a new secretary-treasurer he wanted to learn more about administering the flight pay loss program. “I’m also interested in finding out more about the many resources ALPA provides so that I can better help my pilot group.”

F/O Lauren Metz (Delta), the secretary-treasurer for LEC 66 covering New York’s John F. Kennedy, Newark Liberty, and LaGuardia Airports, observed that Delta’s pilot group is large and diverse. “I want to ensure that I’m able to represent everyone’s interests,” she said. Metz, a Delta media spokesperson during the pilot group’s last contract negotiations and cocreator of the Delta Master Executive Council Family Matters Committee, noted that it was important for her to network with peers during the four-day training session to learn from their experiences.

F/O Armel Cloarec (Air Transat), an A320 pilot and LEC 200 first officer rep in Montréal, Qué., divulged, “Overall, I want to learn more about how to make our pilots’ lives better.” He acknowledged his recent work on a multipilot group committee to study fatigue and Canada’s flight- and duty-time rules, adding that the experience provided him with a new appreciation for the ways in which pilots work together to resolve larger problems.

Not all conference attendees were new to local council work. Capt. Sam Hatchwell (Spirit), an A320 pilot based in Ft. Lauderdale, Fla., and LEC chair for his airline’s instructor pilots (Council 98), formerly served as secretary-treasurer for LEC 109. A previous Grievance Committee volunteer, Hatchwell noted, “This is the first Leadership Training Conference I’ve attended. I took away some great tips on how to develop and hone my leadership skills.”

As LEC 88 first officer rep, F/O Christopher Fogwell (Mesa) represents pilots from a region—the southeastern United States—versus a specific city or seniority block status, which is more typical in ALPA’s local council structure. A former Scheduling Committee rep working on the group’s preferential bidding system, the E175 pilot also served as a Professional Standards (ProStans) Committee member. “I want to learn how to best represent the pilots in my group,” he acknowledged, citing the big difference between the private work of ProStans and the more public nature of serving as a status rep.

Some of the new leaders had a particular interest in prepping for upcoming collective bargaining. Capt. Scott Pauley (FedEx Express), LEC 500 vice chair, said he wanted to learn how to best serve his “Indy-based pilots” in part because the FedEx Express pilot contract will soon become amendable. A previous Pilot-to-Pilot volunteer, Pauley wanted to make sure he and his team are ready, understand the process, and are fully aware of how the union works. “I’ve been blown away by all of the resources that are available,” he said.

Many of this year’s conference attendees are relatively new to the airline industry, but not Capt. Todd Kohner (Delta), LEC 1 captain rep. Having previously flown for Northwest, UPS, Mesaba, and Air Midwest, he brings a unique perspective to local council work in terms of different types of flying, airline mergers, and aviation-industry economic cycles. Asked about the most important takeaway from the training, he observed, “A lot of pilots don’t know how to access the many ALPA resources that are available. I want to make sure everyone knows about and uses the tools they need,” he said. 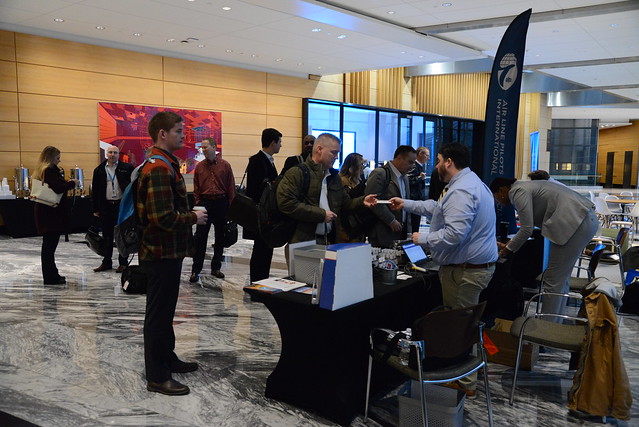 The following ALPA leaders took office on March 1 for a three-year term ending Feb. 28, 2023. Don’t see your rep on the list? Log on your member account and click the Representative tab for the name and e-mail of your elected master executive and local council officers.